It’s a Doozy lights up toteboard in maiden score 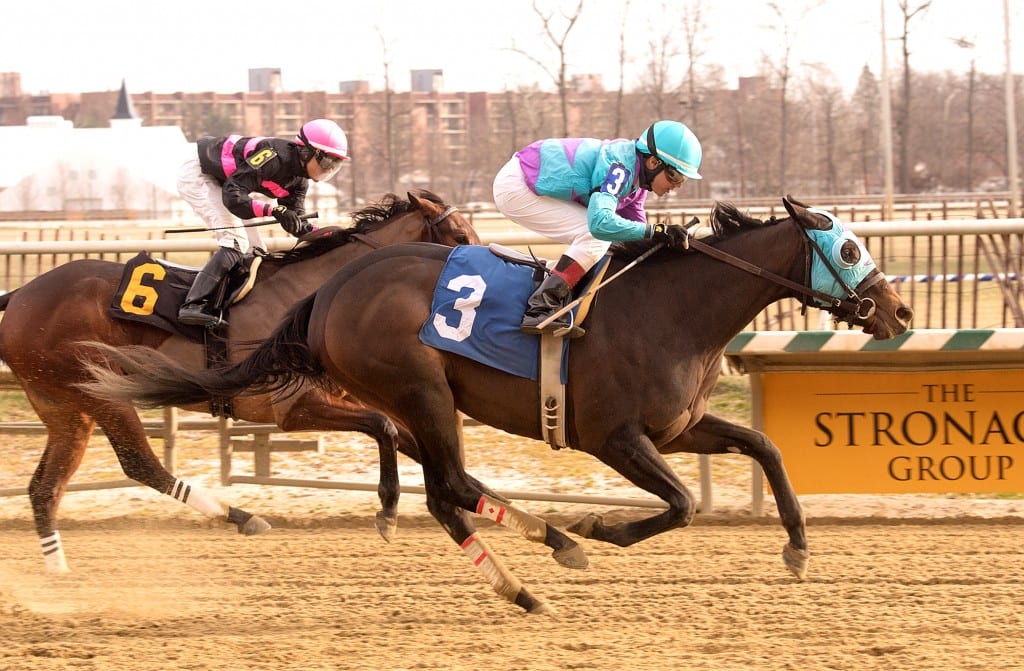 It’s a Doozy scored a 40-1 upset to break her maiden at Laurel Park. Photo by Jim McCue, Maryland Jockey Club.

Burning Daylight Farms’ It’s a Doozy made a bold sweeping move on the far turn, forged a short lead in mid-stretch and kept on to the wire to spring a 41-1 upset in Friday’s $40,000 maiden special weight for 2-year-old fillies at Laurel Park.

It was the first win in her third career start for It’s a Doozy ($84.60), ridden by Elvis Trujillo for trainer Ferris Allen. The dark bay or brown daughter of 2012 juvenile male champion Shanghai Bobby ran six furlongs in 1:13.92 over a fast main track.

RMJ Stables’ Safwah, a $485,000 November 2015 breeding stock sale purchase trained by Graham Motion making her second start, led the field of six through an opening quarter-mile in 23.08 seconds, with Velocita Brillante taking over after a half in 47.73. It’s a Doozy was settled tracking in fourth for four furlongs before launching her bid on the outside and pulling clear of Velocita Brillante past the eighth pole to win by a length.

“We only paid $15,000 for her but we love the filly. She had some bad luck in her first two starts,” Allen said. “We rated her and she did nicely rating, and that’s what happens.”

Four races later, Joseph Besecker’s Mr. Benz drove to the lead on the far outside leaving the backstretch and powered to a length-and-a-half victory in the feature, a $45,000 second-level optional claiming allowance for 3-year-olds and up.

Favored at 2-1 with Jomar Torres up, Mr. Benz ($6.40) completed six furlongs in 1:11.57 for his fourth win from the last seven starts. Joy Drive was second, with Miners Quest third. Mr. Benz had been second in his prior two starts.

“We liked him today. The last couple times he’s been going 5 ½ [furlongs],” said Troy Singh, assistant to winning trainer Claudio Gonzalez. “Today he got the three-quarters, and Jomar rode a good race.”