John Bisono: Roundabout journey to the cusp of a milestone 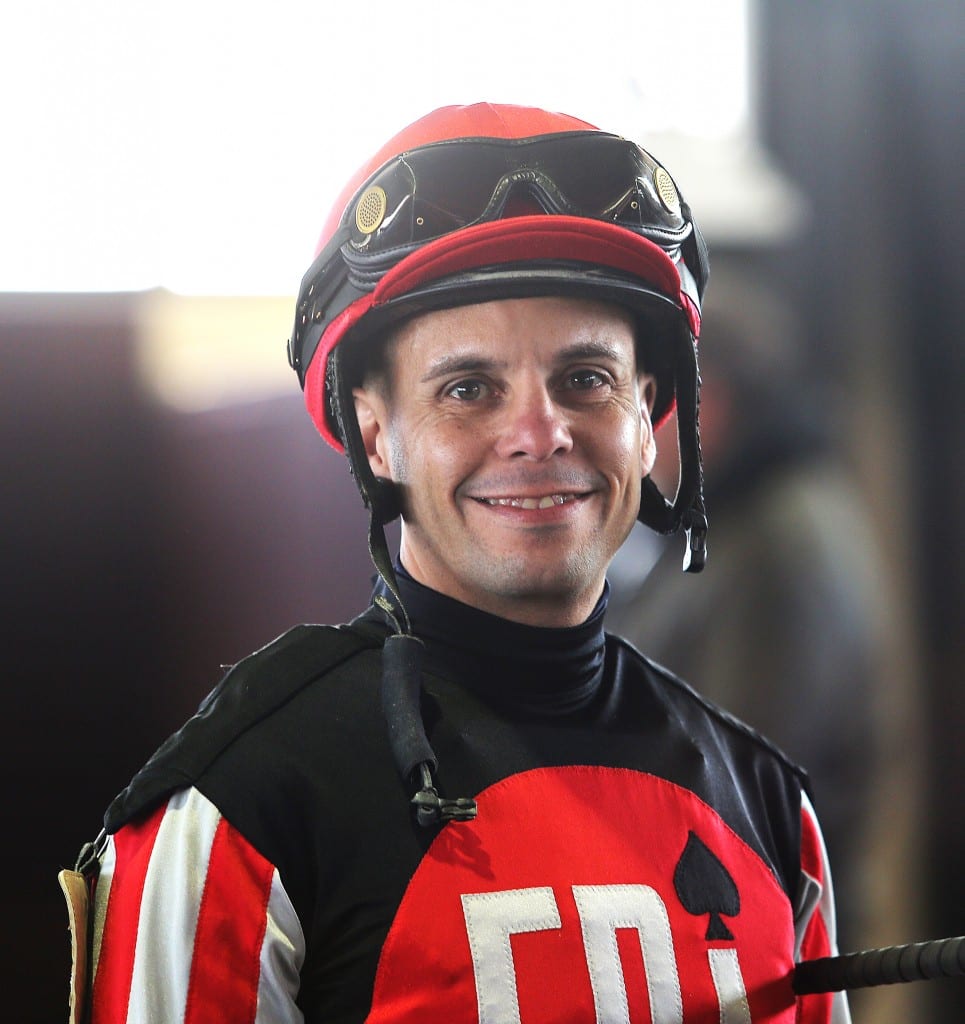 When John Bisono was a young boy growing up in Queens, New York, all he ever wanted to do was become a jockey.

But Bisono suffered badly from asthma as well as animal allergies, so that dream seemed to be one that was out of reach.

Yet today Bisono, 45, has not only fulfilled that dream by becoming a jockey, but he is also sitting on the cusp of winning his 1,000th North American race.

“My Dad took me to the racetrack when I was about eight years old,” recalled Bisono. “I had bad asthma, and even though I said I wanted to be a jockey, my parents didn’t think I was going to be able to, because of the asthma.”

Luckily for Bisono, his allergies included dogs and cats, but not horses.

According to Equibase, Bisono has 996 American wins through December 18. It also notes that he accrued 821 wins in Puerto Rico. That’s a number Bisono disputes.

“I won more than 30 stakes and rode my 1,000th winner in Puerto Rico,” said Bisono, who said he has a win photograph for that milestone. “My statistics are all messed up.”

Rhonda Norby, Equibase’s marketing and communications manager, said that the company does not have comprehensive lifetime information for jockeys who rode in Puerto Rico prior to 1998, which is why it limits milestone alerts to include only United States and Canada victories, and is only reporting 821 Puerto Rico wins for Bisono. But, she said, any documentation that could be provided to Equibase would be used to update his record.

How Bisono came to spend a decade riding in Puerto Rico is an unusual tale.

As a bug-boy in New York, Bisono won with his second mount, Regal Joanie, on September 20, 1989 at Belmont Park in a maiden special weight. By 1990, he had shifted his tack to the mid-Atlantic region, based at Philadelphia Park (now Parx). The Bensalem course was running head-to-head against Garden State Park and Atlantic City, and there was ample opportunity to get mounts.

Bisono remained at Philadelphia year-round until 1995, when he rode at Calder, Gulfstream Park and Hialeah beginning in April. He remained in Florida until the following summer, when he returned to Philadelphia Park.

In 2000, he got a phone call that changed the direction of his career.

“A trainer I knew, Ramon Morales, went to Puerto Rico, and he said, ‘You should come here, you’d win a lot of races.’ So, boom, I was there,” said Bisono. “I was tired of the winters at Philadelphia Park and the weather was great in Puerto Rico. I loved it. I stayed 10 years, riding at Camarero and El Comandante.”

It was a somewhat curious move, considering that most young riders in Puerto Rico tend to hone their craft there before making the permanent move to the United States. Bisono, whose parents hailed from the Dominican Republic and spoke Spanish in their home, had no trouble assimilating to the Puerto Rican way of life.

“I didn’t have any family living there, but I did have friends, and I was just doing something I loved,” he said. “The warm weather in Puerto Rico also helped my asthma – I didn’t get as sick.”

Bisono won many important Grade 1 events in Puerto Rico and, according to his count, more than 1,000 races. But field sizes at the island’s racetracks began to shrink, as did purses, and Bisono realized it was time to come back to the United States.

And when he did, in 2010, the purses at Parx had swelled tremendously thanks to slot machine revenue.

“Last year, I went to Aqueduct for a few weeks during the winter, and I had a great meet,” said Bisono. “I won 19 races and the Toboggan Handicap (Gr. 3, aboard Sassicaia) for Rudy Rodriguez. They wanted me to go back to New York this year, but I’m going to stay at Parx.”

During his tenure at Parx, Bisono has experienced just about everything. In the mid-1990’s, he was struck by a flying object during the running of a race.

“We were going into the first turn and all of a sudden this (Canadian) goose comes out of nowhere, he flies right at me and hits my chest,” recalled Bisono with a laugh (a goose weighs about 14 pounds). “I was pretty surprised, but I kept riding. I’ve seen a lot of crazy stuff here.

“I’ve had a good career, thank God, and I’ve been able to do what I love to do,” he continued. “I win my share of races, and when Todd Pletcher ships in, I ride his horses. So I plan on riding as long as I can.”