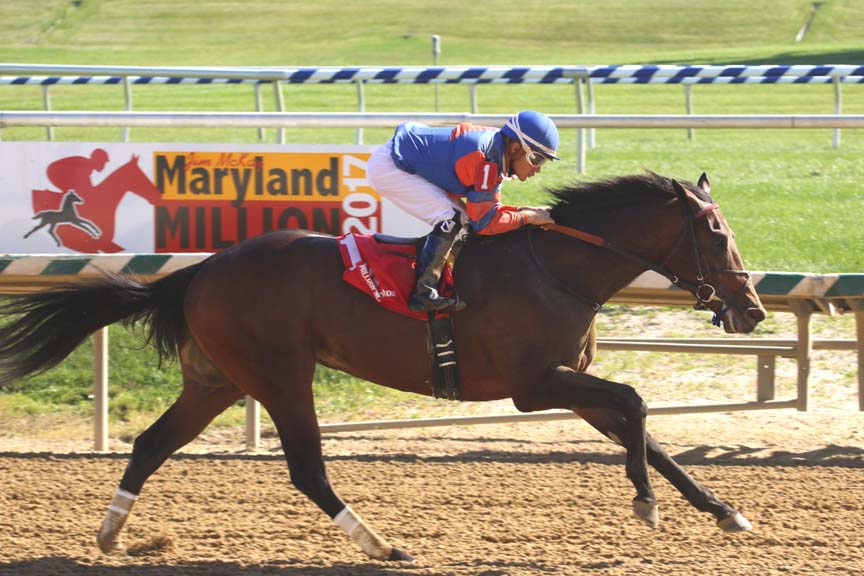 After the first couple of jumps of his career debut, two-year-old Clever Mind seemingly had no chance at all after a sluggish break. By race’s end, he was two lengths clear of his rivals thanks to an impressive sustained rally that brought him to victory in the six-furlong, $100,000 Maryland Million Nursery.

Clever Mind, a bay Buffum colt trained by Fair Hill-based Graham Motion, was making his career debut in the six-furlong Maryland Million Nursery Oct. 21 at Laurel. He drew the rail and got off slowly, trailing the field by 12 lengths through the opening quarter, and was still behind by 11 with less than a half-mile to run.

Swung to the far outside by jockey Nik Juarez, Clever Mind came with an eye-opening rally down the center of the track to win by two lengths in a sparkling 1:10.95 over Mahoning Valley shipper Jamaican Don. Hall of Famer Edgar Prado replaces Juarez in outside Post 6; all horses will carry 120 pounds.

“I was quite pleased with his race,” Motion said. “I thought he might be that good, but I rushed him a little bit to make the Maryland Million because you only get one shot to run in the Maryland Million as a 2-year-old. I was surprised how well he handled it, I must say, but he’s a very classy individual. I was very impressed.”

Jamaican Don, owned and trained by Jason DaCosta, also makes his return in the Maryland Juvenile. Second in the First State Dash at Delaware Park prior to the Maryland Million, he is coming off a 1 ¼-length triumph in an open six-furlong allowance Nov. 13 at Mahoning Valley. He will break directly to the inside of Clever Mind with regular rider Walter De La Cruz aboard.

The other stakes winner in the field is Marathon Farms homebred Whirlin Curlin, who shocked the six-furlong Christopher Elser Memorial Nov. 25 at Laurel by 2 ½ lengths at odds of 23-1. It was the first win in three starts for the gelded son of Hall of Famer Curlin, trained by Gary Capuano.

“That was something. He ran huge that day,” Capuano said. “Even though this is a restricted race like the last one, it’s a whole lot tougher trip. He’s going to have to improve quite a bit again to win this race. He improved greatly from the first race to the second race to the third race. He’ll have to make another big leap.”

Hillwood Stables’ Cordmaker, another son of Curlin, broke his maiden in his second start going six furlongs Sept. 15 at Laurel, then came up a neck short in his first try against winners in a one-mile optional claiming allowance Oct. 15. He has been freshened by trainer Rodney Jenkins for his stakes debut, and tuned up with a bullet half-mile work in 48 seconds from the gate Nov. 25, the fastest of 59 horses.

Completing the field are Terp Racing’s Still Having Fun, a 3 ¼-length debut winner Nov. 17 at Laurel for trainer Tim Keefe; and Riteamontofmschief, exiting a maiden special weight win Nov. 10 at Penn National in his seventh start.