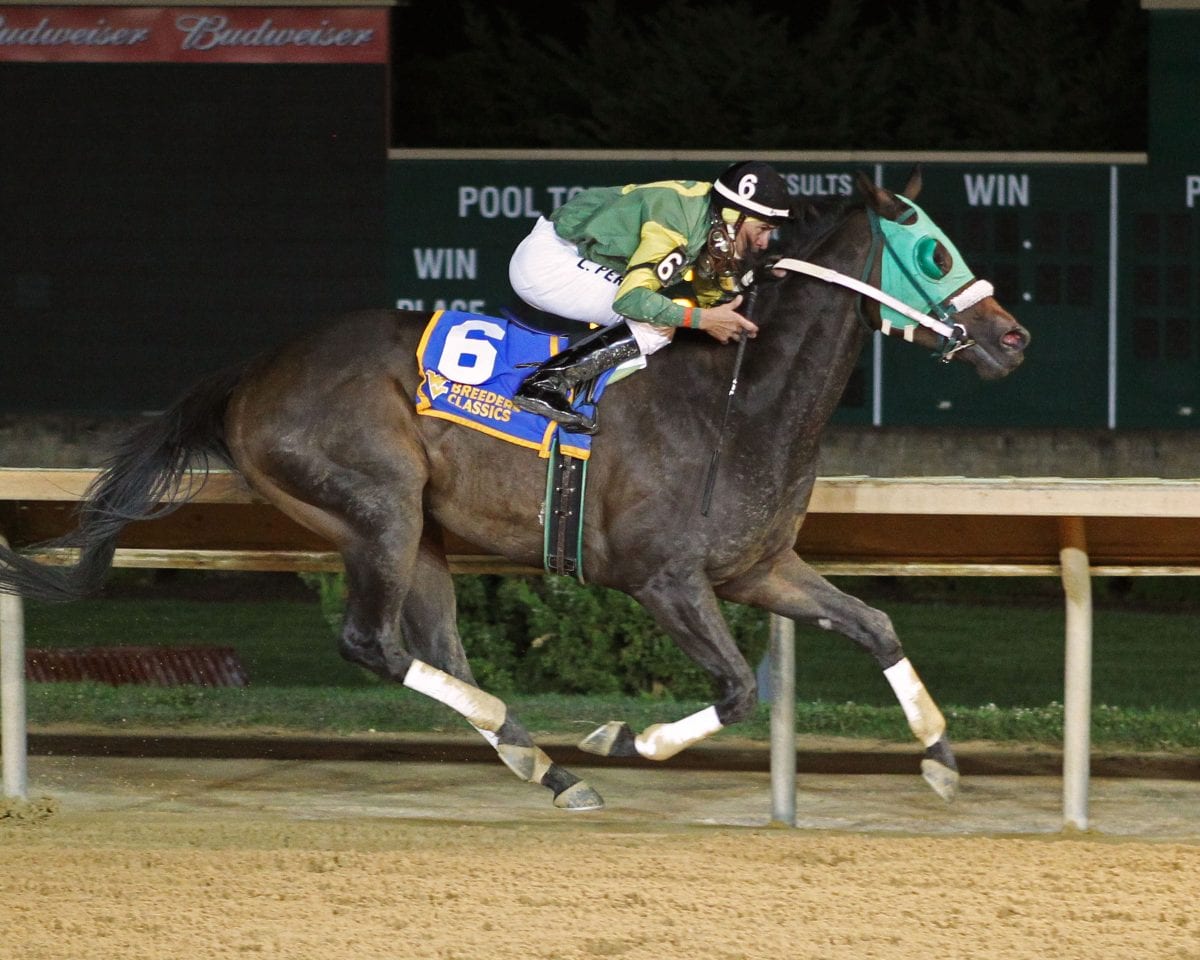 Help a Brother won the 2015 Onion Juice and is favored in tonight’s Autumn Handicap. Photo by Coady Photography.

A half-dozen racetracks will be in action Thanksgiving afternoon, including traditional mainstays like Aqueduct, featuring the Grade 3 Fall Highweight, and Laurel Park, with its annual pie giveaway.

Come dinner time, however, North America’s thoroughbred signals will go dark. All except one.

For the first time, Hollywood Casino at Charles Town Races will present live racing on Thanksgiving night — the only Thoroughbred track in action this evening. Post time is 7:00 p.m., and Erich Zimny, the track’s Vice President of Racing Operations, has high hopes.

“No other North American track is running that night,” Zimny said. “We thought it might be an opportunity to grab literally 100 percent of the North American Thoroughbred market.”

The nine-race card includes three maiden special weight events and is topped by the $30,000 Autumn Handicap. The Autumn features three of the top finishers from last month’s Onion Juice on the West Virginia Breeders Classics card.

“The card is strong,” Zimny said. “Field size is pretty good, and it’ll be nice not to have to monitor post times from other tracks.”

Help a Brother, who was a dominant winner of the Onion Juice, is a surprisingly tepid 5-2 favorite in the Autumn. But he’ll have to contend with Onion Juice runner-up Hear the Chatter (6-1) and fourth-place finisher In the Fairway from the Jeff Runco barn, as well as some intriguing new shooters.

What’s more, six of the nine races have 10 or more horses entered, which, if all go to the post, would mean a full starting gate.

Ultimately, though, the card’s success is likely to have more to do with its lone-wolf placement in the wagering day than the quality of the racing. Any horseplayer looking to make a post-turkey bet will be limited to one, and only one, North American choice.

“We kicked it back and forth for a couple of years,” Zimny said. “We think that it will be a success, though to what extent would be speculation.”

Charles Town normally operates on Thursdays, so its hard-core players already are in the habit of finding the track’s signal. Zimny said that fact, coupled with what he portrayed as growing national awareness of the track’s product, made now a good time to see how the market would respond.

On its last two Thursdays, the track has handled between $1 million and $1.1 million.

“We don’t have a target number in mind,” he said. “We think we’ll end up on the positive side of where we’d normally be on a typical night.”

And if not? Well, nothing ventured, nothing gained. And at the very least, nine sets of winning connections are sure to enjoy the evening’s racing.