Romantic Cork looks to double up in My Sister Pearl 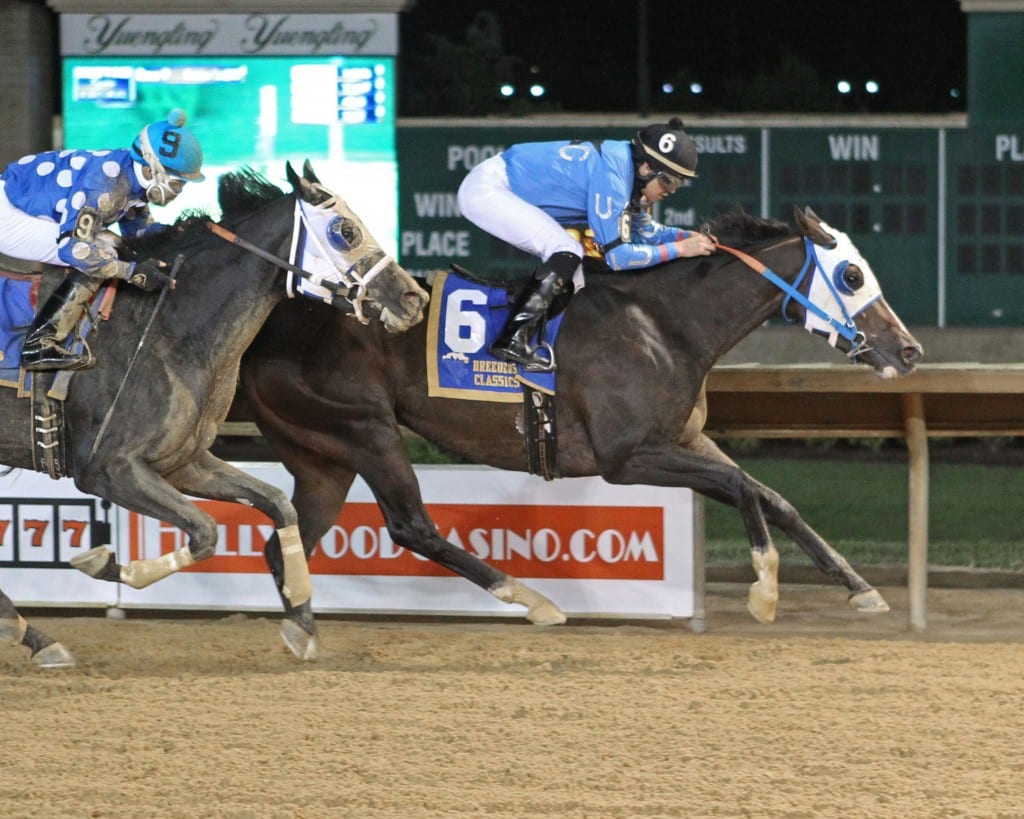 Romantic Cork held on to win the WVBC Distaff. Photo by Coady Photography.

A week ago, the runners from the West Virginia Breeders Classic reconvened in the $50,000 A Huevo Stakes at Charles Town.

Saturday evening, some of the distaffers who contested the WVBC Distaff will do the honors in the $50,000, 1 1/8 mile My Sister Pearl Stakes for West Virginia-bred fillies and mares three and up. The race has attracted three of the Distaff’s top four, as well as the runner-up from the seven-furlong WVBC Cavada.

A month back, John Casey trainee Romantic Cork parlayed a perfect trip under Jose Montano to a half-length win as the lukewarm favorite in the Distaff. She’s the favorite here, too, at 2-1, and with Montano up will look to repeat that feat. The four-year-old daughter of Denis of Cork ran second in this event a year ago to Red Hot Diva.

But though she’ll face just six rivals, at least half of those will have legitimate designs on knocking her off in this spot.

Perhaps the most intriguing of those rivals is T Rex Express (3-1). Trained by leading trainer Jeff Runco, T Rex Express has been first or second in three straight. In each of her last two, she’s had the unenviable task of chasing the speedy Moonlit Song, and she’s done so willingly, running second each time. This event will be her first try beyond seven furlongs, so the distance will certainly be a question mark. But, with regular rider Gerald Almodovar up, she may be the controlling speed in the early part of the race.

The runner-up and fourth-place finishers from the WVBC Distaff both are signed on for this event, as well.

Tim Grams trainee Rock n’ Gold (9-2) gave a spirited effort to be second in the Distaff, falling just a half-length short of the win at odds of 10-1 in what was her first effort in stakes company. That was also her first try beyond seven furlongs, and the daughter of Medallist certainly seemed to take to the stretch out. Christian Hiraldo will have the mount once again.

Spa Creek (4-1), the 2015 and 2016 Distaff winner, could do no better than a fourth-place finish in this year’s event. One of three in here trained by Runco, Spa Creek made a move to challenge in the Distaff before tiring. But the seven-year-old has two wins at the trip — the only runner here with multiple wins at the distance — and certainly seems to be a candidate to contend here. Of some concern to the bettor: Arnaldo Bocachica, who rode her in her last two and is Runco’s go-to rider, picks the third Runco trainee in here, March Wind (5-1), over this one.