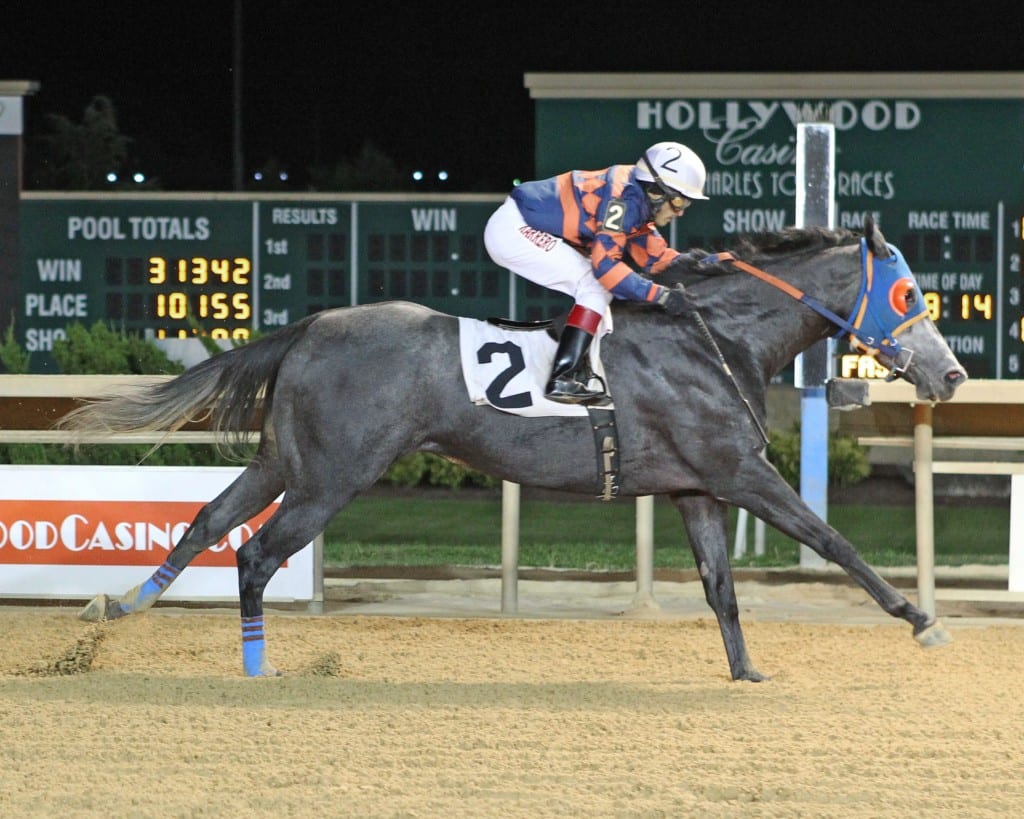 Sonde of Music was all by her lonesome after winning an allowance race October 20. Photo by Coady Photography.

During his days as a groom working for late, great Maryland trainers Grover “Buddy” Delp and Richard “Dick” Dutrow, Sr., Charles Town-based trainer Lee Couchenour learned very quickly that any number of minor incidents can spoil the biggest plans for even the best horses. After watching his three-year-old filly Sonde of Music win the first two starts of her career in one-turn events at her home track, Couchenour is cautiously optimistic she can notch her third win before the year ends — emphasis on cautious.

In fact, Sonde of Music had been prepping for her career debut one year ago when Couchenour noticed something was not quite right with the Fiber Sonde filly after a workout. The trainer could not find any soreness in her knees or ankles or the ligaments in between, but a veterinarian diagnosed Sonde of Music with a pulled suspensory ligament above her knee and prescribed some r’ ‘n’ r’.

“In all of my years of working for Dickie or Buddy Delp in Maryland, I can’t recall any of their horses pulling a suspensory above the knee,” Couchenour said. “We went over her pretty thoroughly and we couldn’t find anything between her knees and her ankles, but we knew something wasn’t right. Then when the vet examined her he found she had pulled her suspensory above her right front knee. It was a very peculiar injury, but we had to give her time off after that.”

Granted ample time to recover and obtain a clean bill of health, Sonde of Music began showing her usual signs of zip in workouts this summer and fall and Couchenour entered her for a one-turn maiden special weight dash for fillies and mares at Charles Town on October 5. Owned and bred by Couchenour and John Oller, the daughter of Fiber Sonde out of the stakes-placed Copelan Too mare Bear’slittlebeauty was made the 9-2 second choice following a pair of opposing workouts, one in which she was 46th of 51 going four furlongs followed by a “bullet” on September 30 when she drilled a half-mile in 48 seconds flat.

When the gates opened in her career debut that evening, Sonde of Music and jockey Carlos Marrero broke alertly to gain the advantage from P.J’s Pride before getting the opener in 21.81 seconds and went on to win by almost five lengths in a sharp 52.61. The effort impressed Couchenour so much that he entered her in an allowance race only 15 days later expecting her to improve off of her debut performance.

Even in her first try against winners and with only one race under her belt, Sonde of Music was made the 3-5 favorite in that October 20 affair. That allowance contest looked to an outside observer like a replay of her debut. Sonde of Music again broke very alertly to gain command before the opener in 21.90 seconds and went on to win by 1 1/2 lengths in 52.84.

Despite staying perfect in two starts to begin her career, however, Sonde of Music did not get an improved grade from her trainer and co-owner, and Couchenour has since opted to give her a little time between that victory and her potential next start in a non-winners of three races lifetime event on December 14.

“I haven’t looked at the Beyer figures for that race, but to me it did not look as fast as her first race,” Couchenour said. “I know from working with Buddy Delp, he always insisted a horse makes its biggest improvement from race one to race two. I was a little disappointed with her final time. She went a little slower. Maybe the track was slower, too. But I really thought she would take a step forward in her second race and I just didn’t see it, so I’m going to give her a little more time before her next start.”

Couchenour graduated from Oxon Hill High School in Prince George’s County in 1966, and his first introduction into horse racing was not at one of Maryland’s thoroughbred flat tracks but instead at Rosecroft Raceway, at the time a half-mile harness racing oval virtually within walking distance of his home. One night his brothers convinced him to ride over to the track and make a few wagers, a concept he initially did not greet with a positive reception.

“When my brothers wanted to go to Rosecroft and watch and bet some of the horses, all I could think was that it was just a stupid idea,” Couchenour said. “But, while I was there I bet $2 to show on the favorite every race and won every time, and when the night ended I thought it was the greatest thing ever. I went to the library to find some books about handicapping horse races and finally went to the Bowie Library and found the Selima Room, which has everything you could ever want to read about horse racing, and from then on I was hooked.”

Couchenour’s sudden passion for the game transcended handicapping and wagering, and he eventually began working as a groom at Bowie Race Course with Dutrow and then later with Delp. Those two comprised half of Maryland’s legendary “Big Four” trainers of the 1960s and 1970, along with John Tammaro and King Leatherbury; Delp and Leatherbury are both now in the Hall of Fame. With those two established trainers as teachers, Couchenour became a hands-on student of the game and learned all of the highs and lows about training and racing horses.

“Dickie (Dutrow) was the ultimate hands-on trainer,” Couchenour said. “He was at the barn every morning by 5:30 and he would get down on his knees and rub every horse he had. He knew which ones were doing really good and which ones were going to need a little time between races. Buddy also had a great eye for his horses. If he had one that raced well in his debut and he told you the horse was going to win next time out, he won next time out. He just had such a great understanding of where horses belonged, so when he said Spectacular Bid was the greatest horse to ever look through a bridle, then you better take that seriously.”

In 2017, Sonde of Music represents both of Couchenour’s winners thus far from nine starts overall. The longtime local conditioner has saddled 710 winners from 4458 starts and has career earnings just above $4 million. His top trainees include Son of a Bear, King With the Axe and Stray Cat Jack, all of which made over $100,000 lifetime. Son of a Bear provided Couchenour’s lone West Virginia Breeders Classic win to date when he scored in the 2009 Vincent Moscarelli Memorial, for two-year-olds.

Sonde of Music has earned $28,000 for her first two triumphs and could eclipse the six-figure sum next summer or fall.

“She worked well the other day [Nov. 2], but she has a peculiar habit of bolting on the far turn in the mornings, which is why she wears blinkers,” Couchenour said. “She has plenty of early speed and I really think she will be just as good going two turns here. She’s got a half-brother named Redoubtable, a two-year-old colt by Windsor Castle who is getting ready to make his first start. The ideal thing would be for Sonde of Music to get her third win before the year ends then we could give her plenty of time off and bring her back next spring and see where she is.”