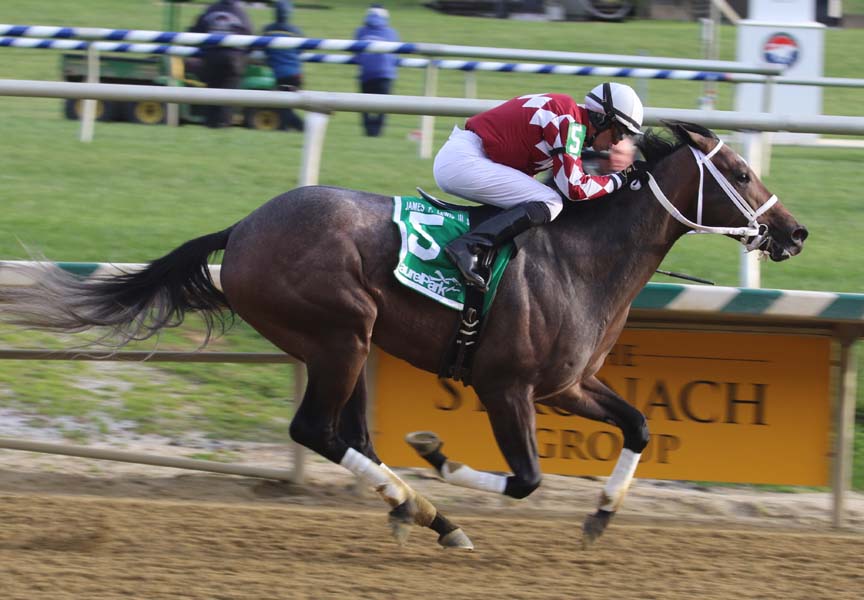 A Different Style was best in the James F. Lewis, III Stakes. Photo by Laurie Asseo.

A third had a stakes win, and yet another was stakes-placed. But by the time the dust had settled, it was perhaps the least accomplished of all, A Different Style, who proved best of all, zipping to the front and holding his pursuers off throughout to post a two-length victory in 1:10.16 for six furlongs.

“This was one of John’s picks from the beginning,” assistant trainer Jennifer Hamm said of her boss. “We all pick one of the babies we think is going to be the best. He picked good. He picked right.”

A Different Style, a son of The Factor, was bred in Kentucky by Fletcher and Carolyn Gray, the husband-wife duo that also bred and campaigned multiple Grade 1 winner I’m a Chatterbox. A Different Style’s dam, Right to Rule, by Five Star Day, also was a stakes winner.

In today’s race, Kowboy Karma, the Larry Jones trainee who came in a winner twice in four starts and last out was fourth in the Grade 1 Champagne, in which he was beaten three lengths by Breeders’ Cup Juvenile winner Good Magic, took all the early money, opening at 1-9 and leaving the gate at 2-5. The Sagamore Farm runner Barry Lee, who won the Arlington-Washington Futurity and last out was second in the Grade 3 Futurity at Belmont Park, was the second choice at 2.80-1.

But when the gates opened, it was A Different Style, the 5-1 third choice, who shot right to the lead under regular pilot John Bisono.

“We knew that there were two horses that looked a little competitive,” Hamm said. “We knew we wanted to break and be in front. The horse was coming into this race just ready. He win that race at Parx and the next day he was on the bit ready to go.”

And go he did, opening a two-length lead after a quarter-mile in 23.11 seconds.  Nearing the quarter-pole Barry Lee and longshot Blame It On Honey launched their bids, but were abruptly turned away. That left only the characteristic late close of Kowboy Karma, but though he made steady progress under Alex Cintron, he never was a threat to the winner.

The final margin was two lengths, with Kowboy Karma in second and Barry Lee another three parts of a length farther back in third. Running time was 1:10.16. The winner returned $12.60 on a two-dollar wager.

It marked three straight years that runners from the Servis barn had come to Laurel to scoop up late-season juvenile races. In 2015, Cathryn Sophia came down to take the Gin Talking and launch her terrific career; last year it was Miss Locust Point who won the Gin Talking.

Now the barn has struck with a colt.

“We’ve just been very fortunate with the horses we’ve had,” Hamm observed. “We all work hard as a family, as a team. We’ve got big shoes to fill with Cathryn. Not everybody gets a Cathryn Sophia.”

That’s true, and it’s a long way from here to winning a Grade 1, as did Cathryn Sophia. But Hamm said there’s plenty to like with A Different Style.

“He’s shown nothing but talent. He’s maturing every day,” she said. “He’s really coming along in his training. We think with some of the babies that we have, one or two of them are going to step up there and be the real deal.”

And A Different Style looks to be a pretty strong candidate to do just that.