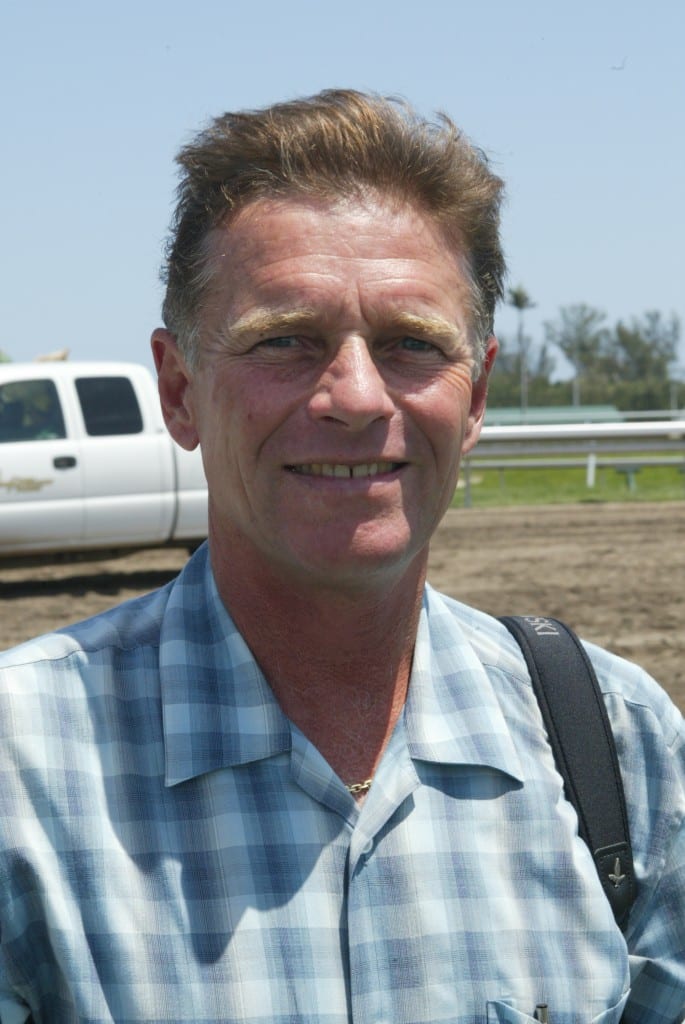 When Tim Hills first became involved in thoroughbred racing, it was because he needed to get a job related to his college major. Now, more than four decades later, he’s on the cusp of saddling his 2,000th winner as a trainer, having won 1,999 races through October 22.

“When people ask me what I think about winning 2,000 races, I laugh and say it just goes to show how long I’ve been around,” said Hills, 65. Hills’s next entry is Friday, when Acorn Street is in a maiden claiming event. He’ll be watching from his south Florida home, where he’s recently celebrated his 32nd wedding anniversary.

A native of Nashua, New Hampshire, Hills was a freshman pursuing pre-veterinary coursework at the University of New Hampshire when he took that first job galloping horses at Rockingham Park. When the trainer he was working for packed up to spend the winter in sunny Florida, Hills decided to go with him and leave college, much to the consternation of his parents.

“I regret leaving college a little, but, frankly, I don’t think it would have made much of a difference for me,” said Hills.

Hills began training in 1973 at Rockingham, and raced in New England as well as throughout the mid-Atlantic region until the early 1990s, when he decided to leave the northern climes for good.

“At the time, Suffolk Downs and Rockingham were running dueling meets, and then when Suffolk stopped live racing and Rockingham decided to lower purses, I said ‘I’m outta here,’” he recalled. It was then that Hills began running full-time in New Jersey and wintering in Florida, a circuit that was once very fashionable with a large colony of trainers, including Hall of Famers Jimmy Croll and Sonny Hine.

Hills became a force at Monmouth Park, especially known for his prowess with turf horses. He won the Monmouth meet title in 2002 and 2004, and he finished second 2001 and 2003. In 2004, he had his best overall year, ringing up a career-best 103 races and more than $3 million in purses. That also marked his fourth straight year with at least 70 wins and came in the middle of what would be an eight-year streak with at least $2 million in purse earnings.

Among the best horses he’s trained is a quartet of graded stakes winners. San’s the Shadow was a lowly RNA at the 1983 Fasig-Tipton Eastern Fall Yearling Sale at Timonium, but blossomed for Hills and owner J. S. Rutan, annexing the 1987 Choice Handicap (Gr. 3) at Monmouth, the Daryl’s Joy Stakes (now the Fourstardave Handicap) (Gr. 3) at Saratoga, and the 1988 Kelso Handicap (Gr. 3) at Belmont Park, as well as four other stakes, earning nearly $400,000.

Another graded stakes winner was Thomas L. Croley’s homebred Kissin’ Jeb, a daughter of Jeblar, who took two stakes at Monmouth in 1999, first winning the Revidere Stakes in May and then the Gr. 3 Reeve Schley, Jr. Stakes in July.

Perhaps the most popular horses that Hills has trained are the graded stakes-placed millionaire Kharafa; the quick turf sprinter Joe’s Son Joey, who won four stakes in 2002-2003; the tough racemare Mooji Moo, who earned over $500,000, and the durable New Jersey-bred Trueamericanspirit, who captured five stakes from 67 starts, and earned $550,000.

During the summer months, Hills carries between 20-25 horses, but he said he currently has 16 in training, with some stabled in New York.

“I’ve always had quite a few turf horses in my barn, and a lot of them I’ll turn out after the New Jersey racing season is over,” he said. “I have a few New York-breds, and I might leave a couple there over the winter.”

Hills is currently serving his third term as a board member of the New Jersey Thoroughbred Horsemen’s Association.

“I enjoy being on the board and helping out Monmouth Park,” he said, noting that it was Robert J. Kulina, the track’s soon-to-be-retiring president, who helped lure him to the track after he became disenchanted with New England racing.

Hills said that it’s often frustrating to try to maintain the same number of racing dates at Monmouth Park and Meadowlands each year, but is encouraged that in 2018 the track will open on Kentucky Derby day, May 5, a day that typically lures large crowds and had long been sought by the horsemen, but that had been resisted in the past by management.

Monmouth is tentatively expected (pending Commission approval) to run two days a week from May through the opening of Saratoga in late July, when it will run four days (Thursday through Sunday), a departure from this year’s schedule that saw racing three days each week (Friday through Sunday).

While Hills isn’t a New Jersey native, he understands the importance of keeping racing alive in the state. Sports betting could be on the horizon, and if it comes to fruition the William Hill company will be the track’s partner in this much-needed revenue stream.

“So many tracks have gone by the wayside,” he said. “It’s important to me that I support New Jersey racing every year, and try to help it survive.”