Trainer Mangual “blessed to be alive” — and to win first stake 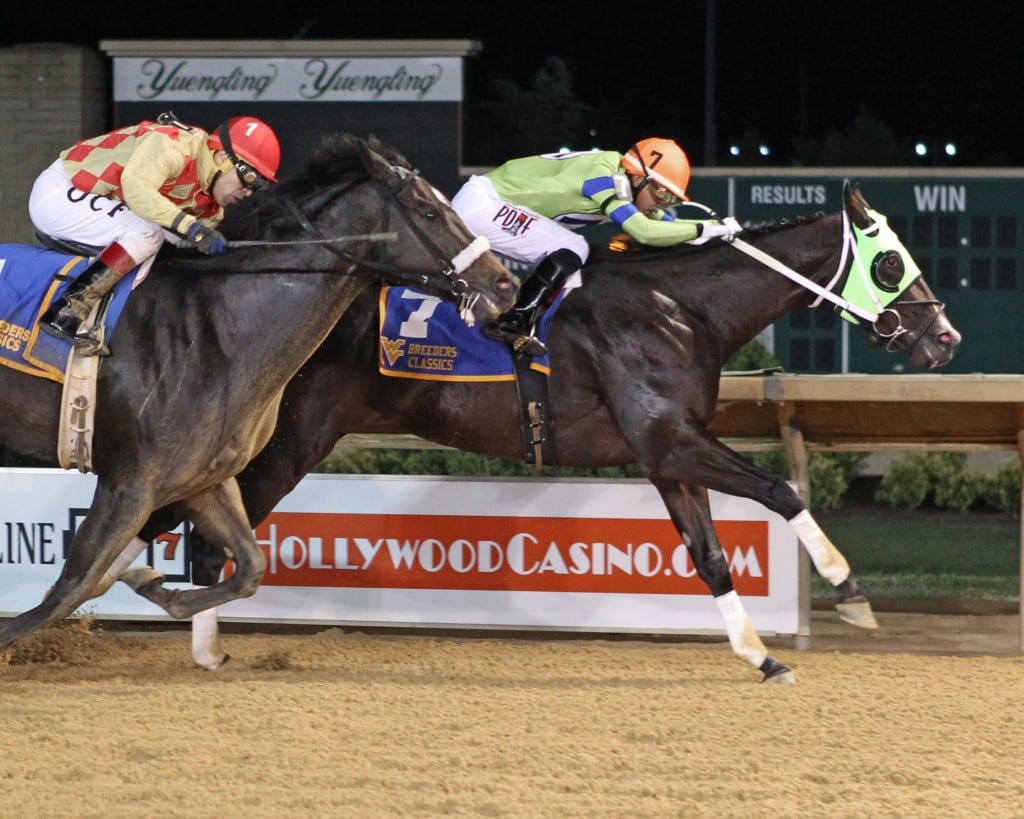 Back in July, trainer Manolo Mangual was involved in a frightening motorcycle accident that left him clinging to life in intensive care at Fairfax Hospital for some three weeks.

“I don’t really remember anything from the accident,” Mangual said Saturday evening. “I just blacked out after it happened and when I woke up I couldn’t remember anything. I’m blessed just to be alive right now.”

Though just a few months back, those dark days seemed like a long time ago this evening when a beaming Mangual stepped into the winner’s circle following the $65,000 West Virginia Dash for Cash Breeders Classic, met there by George Town Cat, a horse he both owns and trains.

And if he has a hard time remembering anything from the accident, it’s likely that every detail of George Town Cat’s win — Mangual’s first stakes win as a trainer — will stay with him for a very long time.

The bettors didn’t have much use for the five-year-old George Town Cat, a Fiber Sonde gelding bred by John McKee, though he had netted eight wins and over $130,000 in earnings in his 36-race career. In his prior race, the $50,000 It’s Only Money Stakes on the Grade 3 Charles Town Oaks undercard, he’d had a rough trip and struggled home eighth and last at 19-1. By post time tonight, he was 41-1.

While bettors saw a last-place finish from a longshot, Mangual saw a horse struggling with a bad trip who drew a much more congenial post — the seven-hole — this evening.

“Last time this horse had the rail and he got stuck along the inside the whole race,” Mangual explained. “When he drew post seven for this race, I knew he was going to be very tough. He has a lot of speed and I knew he could get away from there and stay clear of trouble.”

And that’s how it happened. Under jockey Arnaldo Bocachica, George Town Cat broke sharply, zipped to the rail, and engaged in a spirited duel with the speedy mare Nay’s Back. Those two duked it our during an opening quarter-mile in 21.90 seconds, with Eutaw Street a length away in third.

Approaching the lane, Nay’s Back began to give way — she would finish seventh — but Eutaw Street and favored Greenway Court, the eight-year-old who took the It’s Only Money last month and was favored here, loomed major threats.

But George Town Cat proved stubborn, Eutaw Street could find nowhere to run until it was too late, and Greenway Court emptied out.

“I knew at the top of the lane that he was going to be tough to go past,” Mangual said. “It was so exciting to see him hold off (Eutaw Street). I know my horse is tough and when he makes the lead he doesn’t mind having another horse look him in the eyes.”

In the end, George Town Cat won by a half-length over Eutaw Street, with Rip Current outbobbing Greenway Court for third another three-quarters of a length farther behind. Running time for the 4 1/2 furlongs was 52.44 seconds.

Mangual, whose brother-in-law is jockey J. D. Acosta, got his start working in the Charles Town barns of Sandra Dono, who trained Lucy’s Bob Boy, and Ollie Figgins, III, whose top runner was Dance to Bristol.

“Manny really cares a lot about the horses,” said Dono, whose top charge was retired in a pre-race ceremony tonight. “He used to gallop Lucy’s Bob Boy and he worked him the very first time as a two-year-old. I was very, very happy to hear that he got his first stakes win tonight. He works hard and he’s really good with the horses. I think he’s going to do well.”

“I learned a lot from Sandy and from Ollie,” Mangual said. “They taught me a lot about taking care of the horses.”

Still, since going out on his own in 2012, it hasn’t been easy for Mangual. He’s registered 41 wins in that time with total purse earnings of $712,769 prior to this evening. He hadn’t won more than 15 races in a year or had more than 114 starts in a season. And the July accident didn’t help.

“When I was out of action I lost a few horses, so it’s taken me a little while to get my whole stable back,” he said. “I only have five now, but I’m getting more. I am getting six horses from Finger Lakes tomorrow and then I am going to Monmouth on Monday to get another one.”

And of course, those new horses will coming back to the barn of a stakes-winning trainer. That’s bound to add some bounce to their steps.