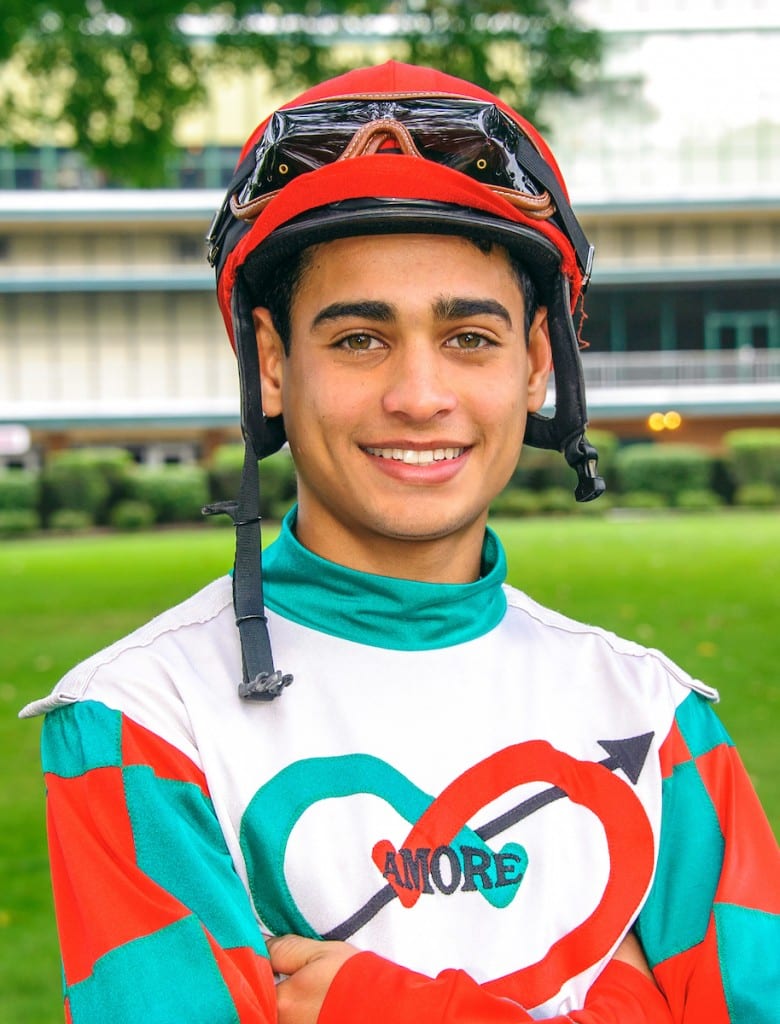 ”I always wanted to be a jockey when I grew up.”

No doubt if you’re a fan of racing or have been involved in the sport, you’ve heard riders say that more than once. Young Franklin Ceballos, who has turned more than a few heads since he began riding in the Mid-Atlantic on a regular basis last month, had also told anyone who would listen his goal was to be a champion rider.

Unlike many of his fellow reinsmen, Ceballos didn’t wait until he was in his teens to begin riding. He started riding horses as early as age five.

That’s right, at five years old Ceballos rode in pony races, he had his own riding pants and boots and had gone so far as learning how to use portable microphones for simulated interviews.

“Being a rider was all I’ve ever wanted to do,” Ceballos recalled recently. “My father was a jockey, so I’ve been around the lifestyle all my life. Even at five the thrill of competition was in my blood.”

Ceballos has come a long way from those pony races, and since moving to the area last month the career of the 18-year-old native of Valencia, Venezuela has taken off.  He’s won three races from seven mounts since he began riding at Delaware Park in early September, and three others finished third. He also has three wins at the Laurel Park fall meeting. Ceballos rode in his native land for a year before coming to the U.S. and struggled in his first eight months in this country before coming north.

“I’ve got much better support behind me here and it’s showing in the kind of horses I’m riding,” the apprentice said, alluding to his agent Tom Stift, who also handles the engagements of Victor Carrasco and Jomar Torres, two of the top riders in the region. “It’s great to be on horses who are competitive and have a chance to win.”

A good example of Ceballos’ abilities was his ride aboard Marble Falls at Delaware Park on September 21. Marble Falls had dueled for the lead from the start of that six furlong claiming sprint, but moving into the final furlong Speedy Mexican had ranged up on the outside and taken about a half length lead. Ceballos never gave up, though, working feverishly on Marble Falls, and the seven-year-old gelding responded gamely, coming back on again to be up in the final strides.

Claudio Gonzalez trains Marble Falls, and he said it was a combination of Ceballos’ refusal to quit and the gameness of Marble Falls that resulted in the narrow win.

“I think Franklin (Ceballos) actually got a little tired in the drive but he regrouped and never gave up and Marble Falls is a warrior who gives you all he’s got,” the trainer observed.  “Franklin’s a young rider and is still learning as he goes along, but he works hard. If he continues to improve he’s got a chance to be a solid rider.”

And what is Ceballos’ goal, “I want to be like Ramon Alfredo Dominguez,” the young rider said simply. “He’s been my hero growing up and my dream is to be like him both as a rider and as a person.”

With a role model like Ramon Dominguez, a member of racing’s Hall of Fame, it looks like Franklin Ceballos is on the right track.