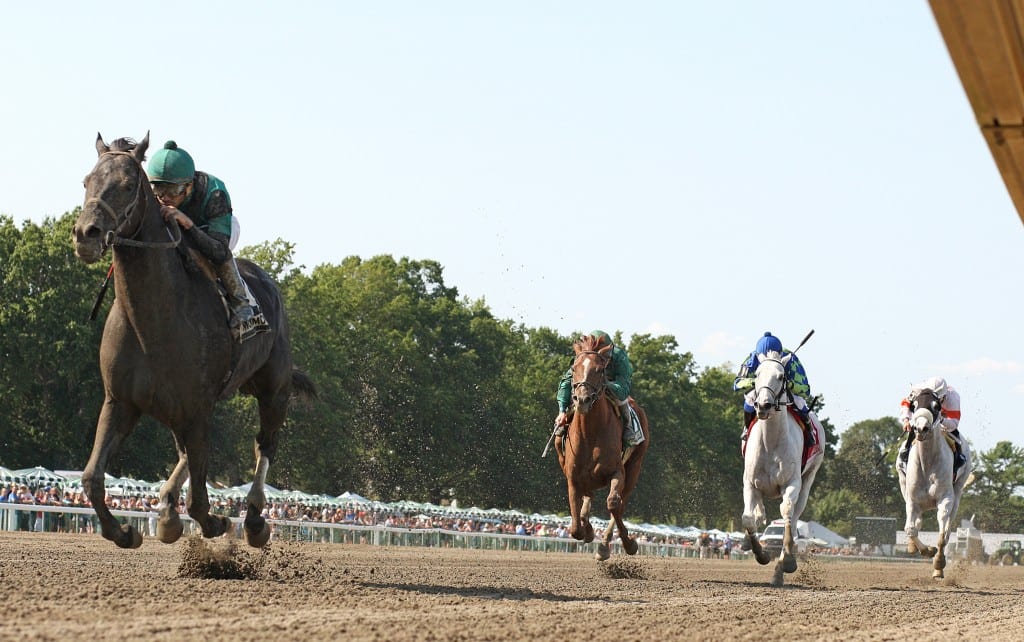 Just Call Kenny was much the best in the G3 Iselin Stakes at Monmouth Park. Photo By Bill Denver/EQUI-PHOTO

Multiple stakes winner Just Call Kenny, who became a graded winner for the first time this summer, is being pointed to the $100,000 Richard W. Small for 3-year-olds and up next month at Laurel Park.

Contested at 1 1/8 miles, the Small is one of six stakes worth $575,000 in purses on a Saturday, Nov. 11 program that will also pay tribute to late Mid-Atlantic legend Ben’s Cat, featuring autographs from his connections and a bobblehead giveaway.

The Small would be the 10th start this year for Just Call Kenny, bred in Virginia and owned by ABL Stable, Dominic Bossone, James Cahill and Peter Donnelly. He is no stranger to Laurel having raced over the surface three times this year, most recently winning a seven-furlong optional claiming allowance April 21.

Among the horses in the field that day were Blu Moon Ace, subsequent winner of the Coalition at Timonium and second in the De Francis Dash (G3), multiple stakes winner Grande Shores and stakes winner Stolen Love.

“We’re looking at the Richard Small,” trainer Pat McBurney said. “It might be a little bit further spaced apart than we’d like, but we like the distance. Last winter when we ran him at Laurel and Parx, the longer races wouldn’t go so we were going six and seven furlongs and he was running good and finishing third, second, fourth and getting checked the whole way. He really does like the mile or further. We like the fact that it’s a distance race. Anything a mile or longer up to a mile and a quarter, he loves it.”

Just Call Kenny is coming off a runner-up finish behind claimer-turned-multimillionaire Page McKenney in the 1 1/16-mile Pa Derby Champion Stakes Sept. 23 at Parx, beaten a half-length. In his prior start, the 6-year-old son of Jump Start strolled to a four-length triumph in the 1 1/8-mile Iselin (G3) Aug. 26 at Monmouth Park.

“The partners all live in New Jersey and that was their home track basically so that was a huge win for us,” McBurney said. “I kind of thought we had Page McKenney leaving the eighth pole last time and the kid who rode for us said, ‘Boy when he got alongside Page, he just dug in and put his head down and held us off by a long neck.’ It was a very good race.”

Following some injury problems that plagued his last two seasons, Just Call Kenny has finished in the top three in each of his last seven starts. Winner of the 2014 Spectacular Bid at Gulfstream Park in his 3-year-old debut, he placed in four graded stakes prior to his breakthrough win in the Iselin.

“When he won his first race as a 3-year-old he got a condylar fracture in his right foreleg and then subsequently had a chip in that leg and then had another chip in that leg,” McBurney said. “So we had done arthroscopic surgery the last couple years and now, finally, it looks like everything’s behind us, thank goodness.

“The owners have been very patient with him and let us train him on his own kind of schedule,” he added. “He’s back to racing as fast, if not faster, than his 3-year-old year.”