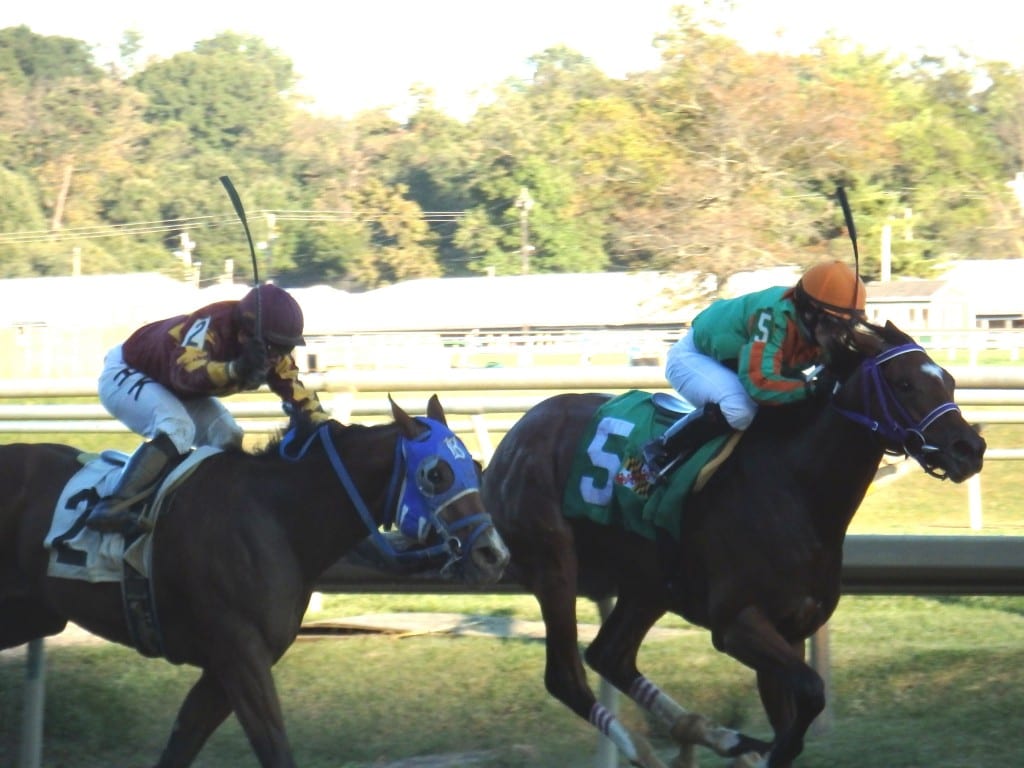 Margie’s Money took an allowance at Laurel Park. Photo by The Racing Biz.

It’s two-up and two-down for Margie’s Money. And now it’s on to the Maryland Million.

“I’m super-excited, to tell you the truth,” jockey Katie Davis said Sunday afternoon after Margie’s Money had powered to a half-length victory in 1:11.62 for six furlongs in a $42,000 allowance contest for two-year-old fillies. “Especially after this race.”

Margie’s Money, a daughter of Great Notion bred and owned by former trainer Terry Shane, now has two wins from two starts. She powered to a six-length victory going five furlongs on debut, a result that’s been flattered twice since, as runner-up Enchanted Star took a maiden race in her follow-up and then, on Saturday, won the Small Wonder Stakes at Delaware Park.

“It was raw speed the last time. She didn’t really get much out of it,” he said. “Now she’s running against winners.”

And though she went off today as the 4-5 favorite, the winners didn’t make it easy on her.

Deep Red and Gibby both were on the engine early, leaving Davis and Margie’s Money hung out in the three-path through quick early fractions. The quarter-mile went by in 22.45 seconds, the half in 45.96.

Deep Red, along the inside, was the first to give way, but Gibby, in between proved a bit more stubborn. Nearing the quarter-pole, Margie’s Money moved to command and then drifted in, tightening the screws on Gibby.

“I was a little nervous dueling with those two other horses,” Davis said. “But I knew once we got into the turn, Hugh said, ‘Make a split decision. If you’re going to go, go and kill the other horses. Rip their heart out.’ That’s basically what I did.”

Gibby would hold third but was no longer a threat to Margie’s Money. But late in the race, Zensational Kiss and Horacio Karamanos made a late run to threaten the leader.

“I was getting nervous,” McMahon said.

“I was switching left and right, just trying to keep her focused and keep going,” Davis added.

In the end, the margin was a half-length. Zensational Kiss was more than three clear of Gibby in third. The running time was a moderate 1:11.62 — the same time that maiden claiming two-year-old fillies had gone earlier on the card.

But the way she did it was undeniably impressive. Two-for-two speaks for itself. And the race, McMahon said, sets his charge up perfectly for the stiffer test to come, in next month’s Maryland Million Lassie.