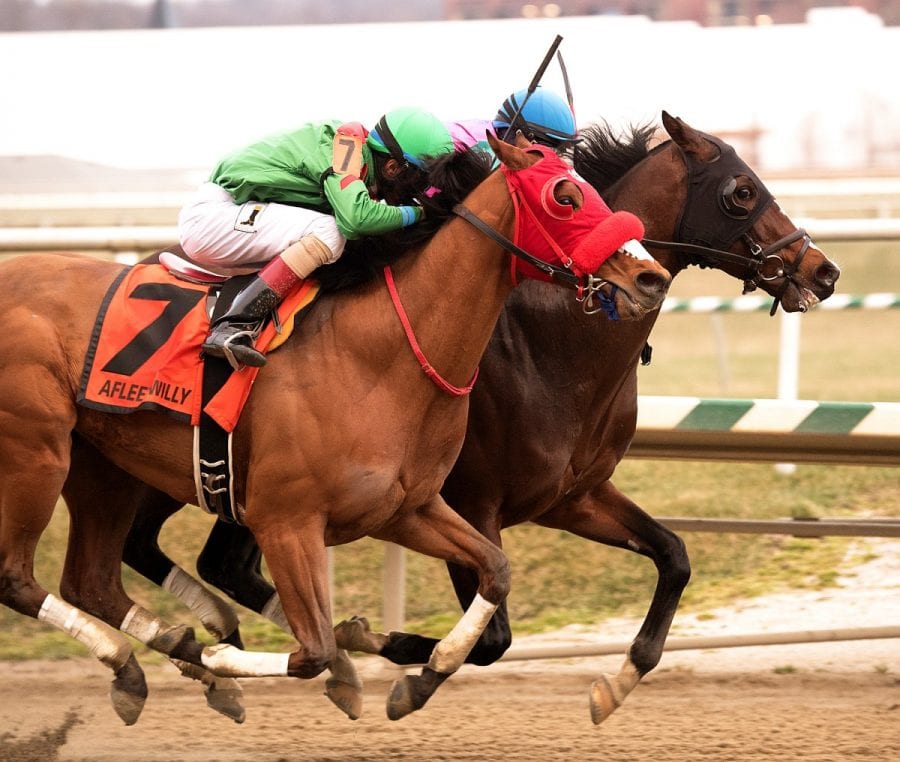 On a day when Delaware Park showcased its best, four-year-old Afleet Willy showcased his, and the result was a new track record.

Afleet Willy, a Wilburn gelding trained by Claudio Gonzalez for BB Horses, posted a dominant 5 3/4 length victory in the $75,000 DTHA Governors Day Handicap Saturday over five rivals. Running time for the 1 mile 70 yards was 1:38.58 — shattering Distinct Vision’s 2003 record of 1:39.20 for the trip.

“He went really easy and when I asked him to go around the far turn, he really turned it on,” said winning rider Jomar Torres.

Afleet Willy’s win came in the first of seven stakes, one for Arabians, comprising the track’s 25th annual Owners’ Day. Handle on the day was $1.07 million, an increase of more than 20 percent from 2016, when the day was held September 10.

Afleet Willy, claimed by Gonzalez out of his maiden-break score in December 2015, now has nine wins from 23 career starts and earnings of more than $300,000.

Saturday, he benefited from the scratches of three other horses — Warrioroftheroses, Dr Blarney, and All Out of Aces — who figured to be part of the early pace mix. That left him the speed of the speed, and he cut half-mile and six-furlong fractions of 45.96 and 1:09.71 with Twocubanbrothersu chasing in second, the two of them well clear of their rivals.

For comparison purposes, the six-furlong time of 1:09.71 was faster than sprinters managed the same distance seven races later in the New Castle Stakes.

Twocubanbrothersu held second, while Fellowship, a runner who figured to benefit had all the speed horses remained in, was along for third.

Another race in which scratches played a role was the George Rosenberger Memorial Stakes, for fillies and mares going 1 1/16 miles on the turf and, like the Governor’s Day, restricted to horses that had started previously at Delaware Park during the meet. That race lost four runners, including 7-2 Bishop’s Pond and 6-1 Lift Up.

Those scratches moved Laur Net, a six-year-old Strong Hope mare, into the eight-hole — from the 12. The Aldana Gonzalez trainee, a $62,500 claim for Looch Racing Stables five back, rallied along the inside to post a 1 1/4 length win in 1:42.30. Boreale, the 6-5 favorite, finished second, and longshot Nawlins Kitty was third.

“Since we drew an outside post, I was a little concerned about saving ground,” said winning rider Scott Spieth.  “Fortunately, I got her down on the inside going around the first turn where we saved ground.  Going into the far turn, the #4 horse (Wowwhatabrat) was fortunately backing up which allowed us to shoot to the fence.  From there, it was just about being patient.  I knew once he opened up, I was loaded and had plenty of horse.”

In the day’s other stakes: