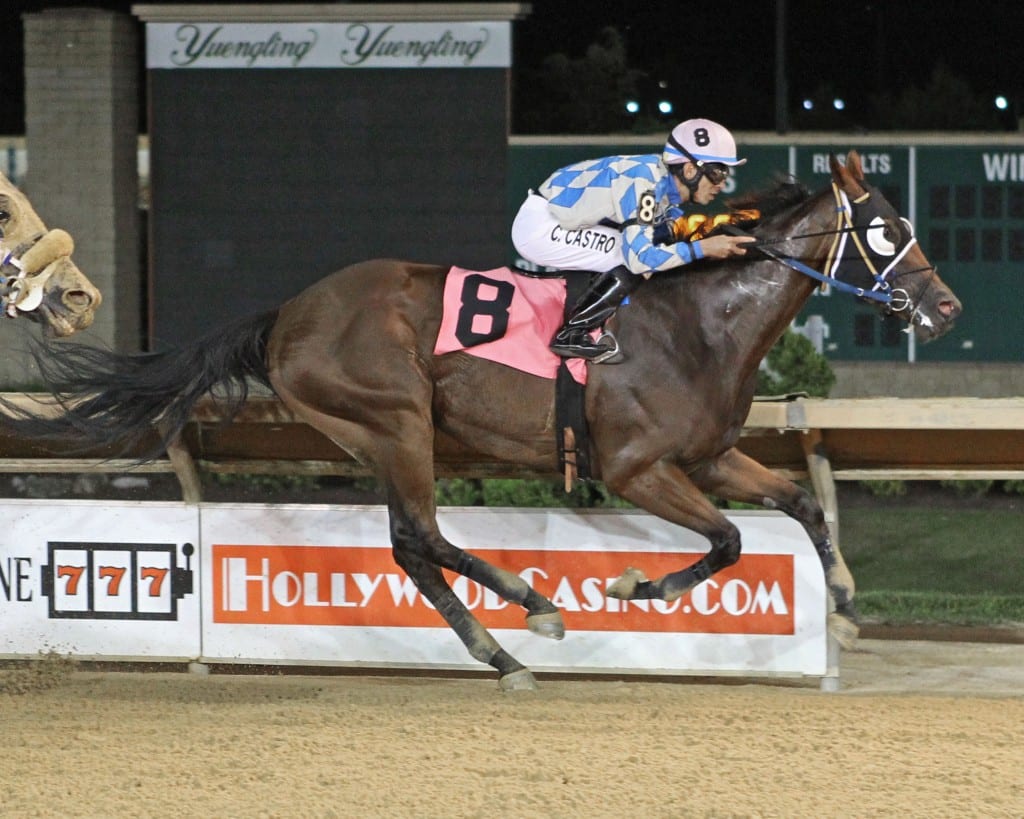 Besides crowing Tequilita champion of the Grade 3 Charles Town Oaks, Saturday’s races at Charles Town also served up the final five “Win and You’re In” races for the West Virginia Breeders Classics (WVBC), to be contested over the same track October 14.

All told, the nine “Win and You’re In” races went to seven different horses. Two runners — Unrideabull and Moonlit Song — will have a choice of two different spots.

Unrideabull, a three-year-old Bullsbay gelding, took Saturday’s Frank Gall Memorial Stakes in front-running fashion, just holding off the late charge of Start Line. That earned Unrideabull automatic entry to the 1 1/8 mile, $350,000 Classic; with his win in the August 19 Robert G. Leavitt Stakes, the Michael Sterling trainee previously had earned a spot in the West Virginia Lottery Breeders Classic, a seven-furlong test for three-year-olds.

Given how the Gall played out — Unrideabull’s four-length lead with a furlong to go ended up just a half-length advantage at the wire — it seems likely that Sterling, who also bred and owns the horse, will choose either the WV Lottery or the seven-furlong Onion Juice over the nine-furlong Classic.

Moonlit Song registered one of the evening’s most impressive victories. She sped to the front and went on to win the seven-furlong Sadie Hawkins by almost seven lengths in a sharp time of 1:25.87 — faster than the Gall, one race later, and faster than the Grade 3 Charles Town Oaks three races later.

Moonlit Song, bred, owned, and trained by Tim Grams, earned a spot in the nine-furlong WVBC Distaff with the triumph. She previously had earned a date in the seven-furlong West Virginia Division of Tourism Breeders Classic with her win in the Sylvia Bishop Memorial Stakes August 26.

But Grams said she’s likely to ignore both those spots and instead head for the West Virginia Cavada Breeders Classic, a seven-furlong test with a $125,000 purse that serves as the top undercard race to the Classic. In that race, Moonlit Song would see a group largely similar to those she bested on Saturday. Spa Creek, seventh in the Sadie Hawkins, previously had earned a spot in the Cavada with her win in the April 22 Original Gold Stakes.

A pair of juveniles also stamped their tickets to WVBC races on Saturday. Henry Mercer Memorial winner William and Mary earned a slot in the 6 1/2 furlong Vincent Moscarelli Memorial Breeders Classic for two-year-olds, while Rachel’s Turn winner Noblame locked down a spot in the starting gate for the 6 1/2 furlong West Virginia Triple Crown Nutrition Breeders Classic for two-year-old fillies.