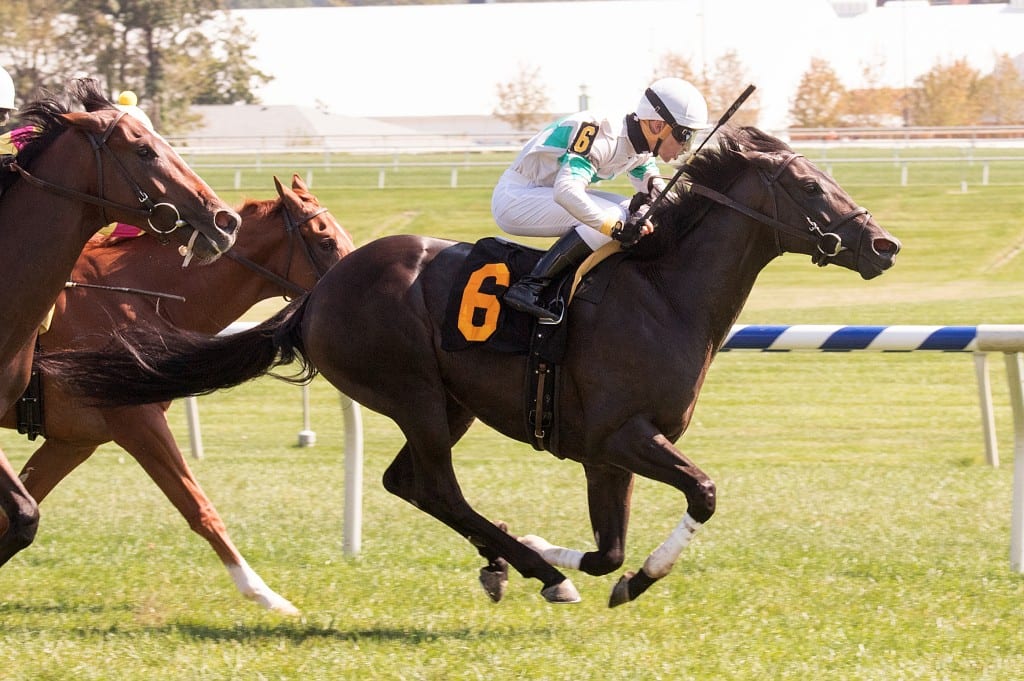 Monticule LLC’s well-regarded homebred Archaggelos, sent off as the third choice in a strong field of a dozen juveniles, forged a short lead in mid-stretch and kept on determinedly to the wire for a half-length victory in Sunday’s second-race feature at Laurel Park.

Archaggelos ($10.80) ran 1 1/16 miles over a firm Dahlia Turf Course in 1:42.06 under jockey Alex Cintron for trainer Michael Dickinson in the $40,000 maiden special weight event. It was the second career start for the bay Temple City colt, second in his July 27 debut at Delaware Park.

“Before the race we’d have been happy with third, because there were a lot of well-bred, well-fancied horses in there,” Dickinson said. “We knew it was a competitive race. We’re very happy to win.”

Cintron had Archaggelos rated kindly along the inside behind a contested pace of 23.98 and 48.56 seconds from long shots My Brothersledge (72-1) and Monongah (16-1). Cintron swung out three wide leaving the quarter pole, split horses in upper stretch to get in contention and held off a spirited lat eeffort from runner-up Home It Tiz. It was another half-length back to Quail Hunt in third. Post-time favorite Survey, an Irish-bred son of Galileo, wound up eighth.

David and Meg Wimer’s Anna Strong sparkled in her career debut, coming from off the pace for a half-length victory in Sunday’s co-featured $40,000 maiden special weight for juvenile fillies in Race 4.

Anna Strong ($9.80) showed a string of several strong works at Laurel for her unveiling, where she trailed all but one horse through fractions of 23.55 and 48.63 seconds before angling out for a clear run approaching the stretch and powering down the lane to catch 27-1 long shot and Cal Lynch-trained stablemate Dancingwithpaynter to hit the wire in 1:42.85 for 1 1/16 miles over the All Along Turf Course.

“We were really, really hopeful that this filly would show up on the turf and thank God she did. She was working on the El Areeb schedule, mile and an eighths and stuff like that. She had done quite a few of them,” Lynch said. “We have a couple other 2-year-olds that haven’t run yet that she’s been working with and we were excited.

“We were hoping she’d like the turf. We thought she would with her pedigree, out of a Dixie Union mare. We’re delighted to get the job done today,” he added. “We’re not in any hurry with her. They’ve been very patient up to now and she’s still a big, growing filly. She’s nowhere near where she needs to be. There’s a lot of room for improvement so we’re quite excited actually.”

Live racing returns to Laurel with a 10-race program Friday beginning at 1:10 p.m.