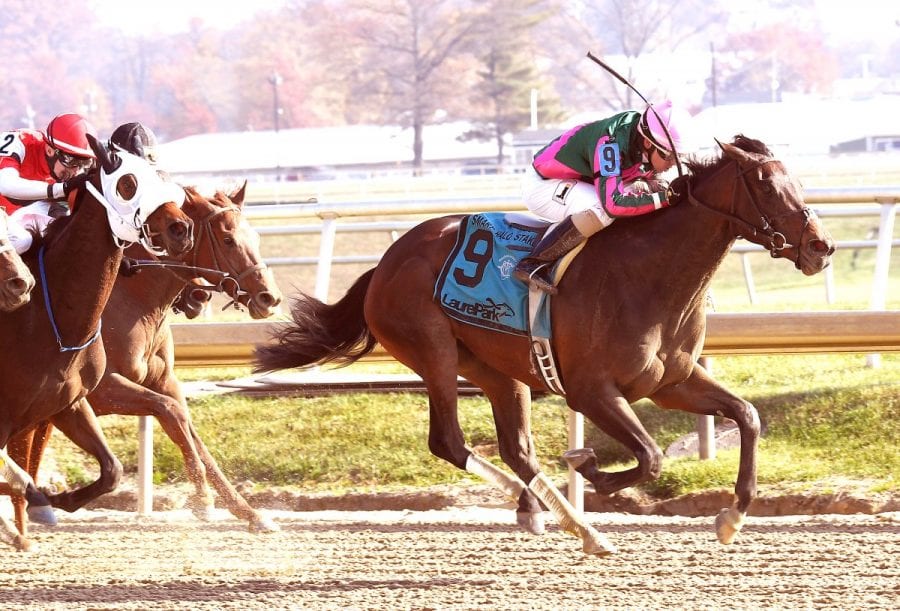 An overflow field of three-year-old fillies will take to the gate at Hollywood Casino at Charles Town Races this Saturday night in a quest to take home the lion’s share of the money in the Grade 3, $300,000 Charles Town Oaks. The Charles Town Oaks is the featured race on the track’s 12 race Race for the Ribbon program which includes a total of seven stakes races and gets underway at the special first post of 5:00 P.M. EST.

The role of morning line favorite for the Charles Town Oaks falls to Forward Gal (G2) winner Tequilita from the barn of trainer Michael Matz. After earning the first graded stakes win of her career in her three-year-old debut, Matz stretched Tequilita out to 1 1/16 Miles in the Gulfstream Park Oaks (G2) before a seventh place finish in the Kentucky Oaks (G1) over a sloppy racing strip at Churchill Downs one month later. Following three months away from the races, she returned to sprinting in the Test (G1) at Saratoga where she finished a solid third behind the Bob Baffert-trained duo of American Gal and Faypien.

Matz trained Tequilita’s dam – Grade 2 winner Sangrita – and the filly is owned and was bred by his wife, Dorothy Alexander Matz. Throw in the fact that Matz saddled Tequilita’s sire Union Rags to a win in the 2012 Belmont Stakes and it makes for a tight bond between the horse and her trainer.

“I trained her mother and her best distance was probably a mile, and obviously I think she [Tequilita] can do that, but she has enough speed to get the job done at seven furlongs as well. But certainly when you train both the mother and the father its special, and you can pick up on different characteristics they had and use that to your advantage.”

Tequilita will once again have the services of jockey Luis Saez on Saturday night. She’s 7-2 on the morning line.

WinStar Farm’s Overture will also be looking for her second victory in a graded stakes this year after taking the Indiana Oaks (G3) in front running fashion back in July. Trained by Bill Mott, the daughter of Congrats most recently set a quick pace in the Monmouth Oaks (G3) before losing the lead and checking in third behind Teresa Z and Sine Wave.

While Overture’s last four starts have seen her on the lead, she’ll be cutting back to a seven furlong distance for the first time since her maiden breaking score at Gulfstream Park on April 5 and her trainer doesn’t believe she needs to be squarely on the front end to be effective.

“The fact that she should have decent position in the race is important,” said Mott. “It sounds like there should be plenty of speed in the race, so she doesn’t have to have the lead but we expect her to be forwardly placed.”

Jose Ortiz, who will look for his second win in the Charles Town Oaks, has the call on Overture (5-1).

The West Coast will be represented in the Charles Town Oaks in the form of Munny Spunt, winner of the only graded main track race for three-year-old fillies at Del Mar’s summer meet when she was promoted to first in the Torrey Pines (G3) following the disqualification of Zapperkat.

Owned in a partnership that includes NHL defenseman Erik Johnson’s ERJ Racing LLC, the daughter of Munnings was claimed for just $25,000 by current trainer Doug O’Neill before easily winning a claiming event at Del Mar at the $32,000 level. Munny Spunt would then make her first foray into graded stakes company when finishing fourth against older fillies and mares in the Rancho Bernardo (G3) prior to her victory in the Torrey Pines.

The start in the Torrey Pines marked the filly’s first go around the same two-turn distance she’ll face Saturday night, a fact O’Neill believes bodes well for her chances.

“We’re very excited and optimistic on Munny Spunt’s chances,” said the two-time Kentucky Derby winning conditioner. “Her first time going two turns in her last start really agreed with her. Drayden [Van Dyke] staying on her for this race is a plus as well.”

Munny Spunt (4-1) and Van Dyke break from post 8 in the Charles Town Oaks.

Three C Stables, West Point Thoroughbreds and Robert Masiello’s Berned (8-1) owns a graded stakes placing, having finished second behind Miss Sky Warrior in the Tempted (G3) at Aqueduct in November of her two-year-old season. The Graham Motion trainee then went to the sidelines following a poor showing in the Starlet (G1) before emerging in an optional claiming allowance at Monmouth Park in May where she won by 2 1/4 lengths over eventual Monmouth Oaks winner Teresa Z.

After dropping decisions in the Delaware Oaks (G3) and to the likes of Abel Tasman and Elate in the Coaching Club American Oaks (G1), Berned was switched to the turf in her last start – the $100,000 Riskaverse at Saratoga but could do no better than eighth. She not only returns to dirt in the Charles Town Oaks but the seven furlong distance of the race appears within her wheelhouse as Berned shows a pair of wins and a pair of runner-up finishes when going a mile or shorter in her eight race career.

“I’m very happy with how she’s done,” says Motion. “I’ve had a little bit of a hard time figuring out what she wants to do, but at this time we feel that it’s best to shorten her up, and this spot was very appealing to us.”

Poindexter Thoroughbreds sends its multiple stakes winning homebred Chanel’s Legacy out in the Charles Town Oaks in an effort to grab her first career win in graded company.

A winner of the Dixie Belle and Martha Washington stakes at Oaklawn and the Panthers Stakes at Prairie Meadows earlier in the year, Chanel’s Legacy will make her first start for trainer David Cannizzo following a run against some of the division’s heavyweights in the Test.

“She’s training very forwardly coming out of the Test, doing everything I’ve asked her to do, and hopefully she’s sitting on a big one,” said the New York based Cannizzo. “You have to take a shot in races like this. She’s grade stakes placed, but getting a graded stakes win on her resume would be a big thing.”

“I think the track configuration will suit her because she’s quick enough to get a good position out of the gate, and it’s just going to depend on who else shows up.”

Cannizzo has enlisted the services of local rider Jose Montano for the Charles Town Oaks. Chanel’s Legacy is 12-1 on the morning line.

After starting her career with three wins in her first four starts, Dreamchaser Thoroughbreds Astrollinthepark (15-1) looked to be on her way to bigger and better spots. However, she’ll enter the Charles Town Oaks on Saturday off a fifth place finish in the Miss Preakness (G3) and disappointing sixth place effort in the Alma North at Laurel Park in June, the latter of which took her away from the races for a few months.

Astrollinthepark’s trainer, Larry Jones, thinks that his filly is ready to turn the corner and get back to her winning ways.

“For a while there we thought she could be any kind, but she had a little issue coming out of her last race and we have that cleared up. She’s been doing really well. She’s not a particularly big filly so we think she’ll like the track.”

The other cross entered filly is Jeremiah Kane’s Sine Wave (8-1) who comes off a runner-up performance in the Monmouth Oaks and also has a second place finish in the Beaumont (G3) at Keeneland on her resume.

Lady Sheila Stable’s Downtown Mama (6-1) and supplemental nominee R Angel Katelyn (12-1) complete the lineup of the body of the race. Lady Sheila Stable and Downtown Mama’s trainer Linda Rice will attempt to team up to win the Charles Town Oaks for the second time, having won with Hot City Girl in 2015.

With the field limited to ten starters, a quartet of horses find themselves on the also-eligible list with supplemental nominee Yorkiepoo Princess (15-1) the first to draw in should there be a defection in the body of the race. The also-eligibles are rounded out by Who’s the Lady (12-1), Ellen Charles’ Shimmering Aspen (5-1) and Stormy Embrace (15-1).

Post time for the Charles Town Oaks is set for 10:18 P.M. and the race can be seen on TVG and heard on the Horse Racing Radio Network