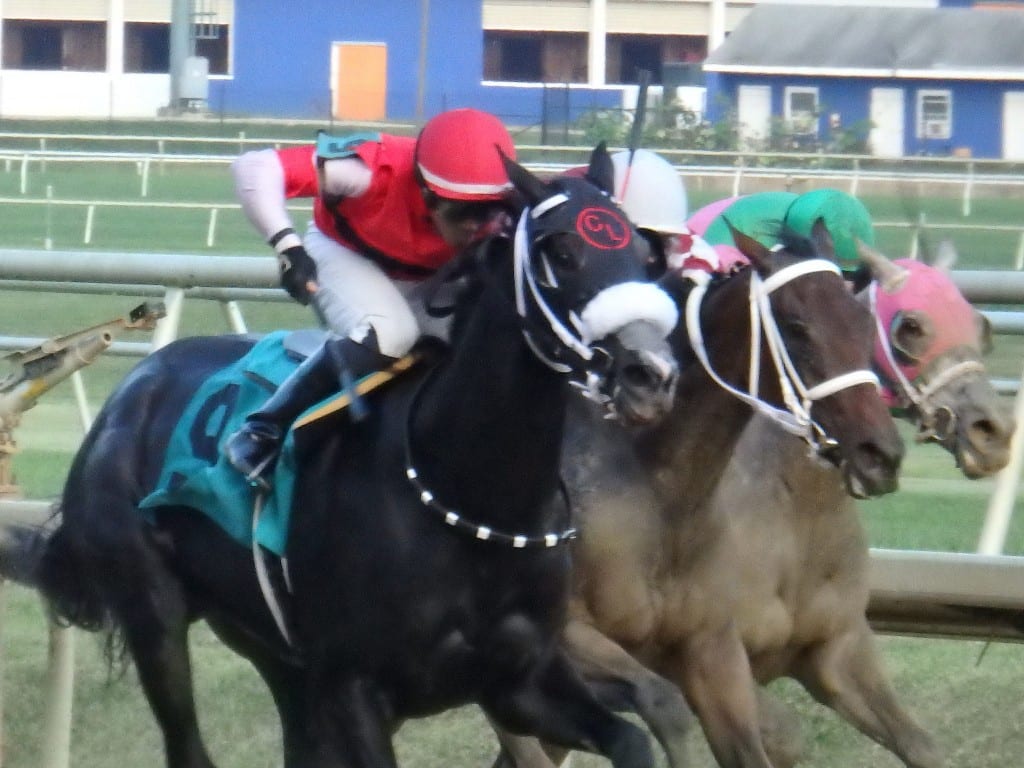 Theodosia won a maiden race at Laurel Park on September 17. Photo by The Racing Biz.

Our new Laurel Park racing notebook gives you the scoop on the weekend’s racing, even if you couldn’t make it out. Horses to watch, headlines from the weekend, leading jocks and trainers — it’s all here.

Check it out below.

The chart at right is the top 10 jockeys in the Laurel Park colony by return on wagering investment among all jockeys with at least 10 starts at the current meeting.

It was a wide-open weekend among Laurel Park jockeys. Five of them — Forest Boyce, Daniel Centeno, Alex Cintron, Sheldon Russell, and Jomar Torres — won three times each, with Centeno scoring with three of just nine starters.

Four other jocks — Arnaldo Bocachica, Kevin Gomez, Edwin Gonzalez, and Steve Hamilton — won twice each. Bocachica’s two wins were from just five starters on the weekend. Oddly enough, the jockey with the highest purse earnings during the weekend won only once. Horacio Karamanos’ lone win from 18 starters came aboard Chublicious in the Grade 3 De Francis Dash, but that one score helped power him to weekend earnings of $217,666.

Overall, Alex Cintron leads the colony with nine winners, followed by Steve Hamilton (six), and then Katie Davis and Kevin Gomez (four each). In terms of ROI, Edwin Gonzalez is the only jock with at least 10 starts to date to have returned bettors more than they cost, checking in with a $2 ROI of $2.44. Alex Cintron is next, at $1.92.

The chart at left is the top 10 trainers in the Laurel Park colony by return on wagering investment among all trainers with at least six starts at the current meeting.

For the meet to date, Capuano, Gonzalez, and Mike Trombetta lead the standing with four wins apiece, with four others having won twice each.

Oddly enough, the trainer leading the colony in wagering ROI among those with at least six starts has just a single win thus far. Howard Wolfendale’s lone score, with Unspoken, generated a $20.80 win payout, giving him a return on investment of $3.46 per $2 wagered. Wolfendale is one of five trainers with an ROI above $3.00 and one of eight over $2.00.