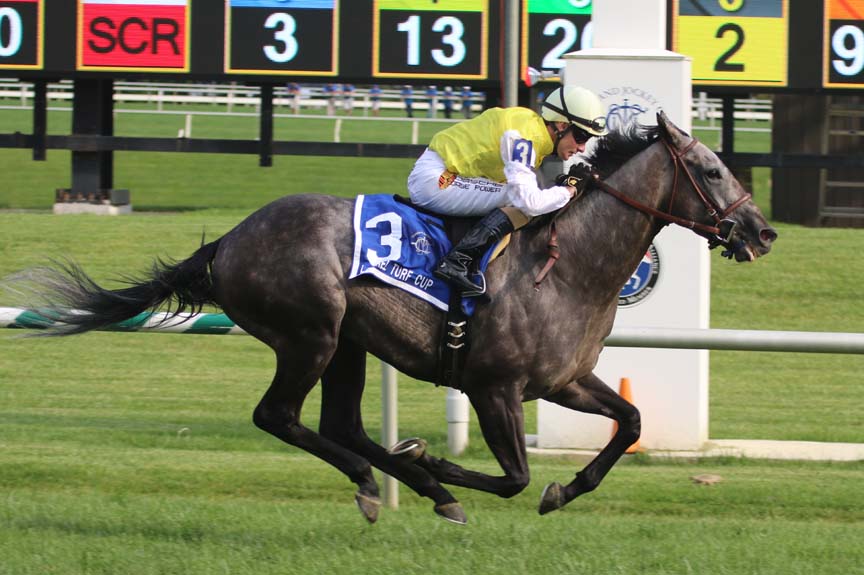 Canessar was much the best in winning the Laurel Turf Cup. Photo by Laurie Asseo.

In the six weeks since he took over the training for Canessar after the four-year-old Kendargent gelding arrived from France, trainer Arnaud Delacour has watched the turf specialist continue to progress in his modest workouts at Fair Hill. On Saturday he watched him unleash his stellar late kick en route to a sharp score in the $100,000 Laurel Turf Cup for owner Guy Pariente.

Sent out as the 3-1 second choice in the demanding one-mile and one-half affair over the firm Laurel grass, Canessar bided his time through the early stages as Renown set honest early fractions on a clear, uncontested lead through the first mile in a surprisingly zippy 1:37.34.

Canessar shifted gears between horses leaving the three-eighths pole, swept to command turning for home, and drew clear to a two-length score while stopping the timer in 2:25.23 for the 12 furlongs with Feargal Lynch aboard.

“My whole plan was really just to follow the six horse (Infinite Wisdom with Mike Luzzi aboard),” Lynch said. “I wanted him to settle in early and when the six horse went, that’s when I made my move. He seemed like he was one of those typical French horses that likes to race covered up. So, I stayed in behind horses until the three-eighths and then let him roll. Arnaud does a good job with all of his horses. Anytime he sends one down here I know he’ll be ready.”

Canessar arrived in Delacour’s Fair Hill barn on August 10 and in his preparation for his United States debut on Saturday, he participated in a quartet of moderate workouts over the synthetic surface with several purposes in mind. Delacour wanted to make sure the gelding was gradually getting fitter for his local debut and also adapting well to the surroundings after spending the early part of his career in France.

“When I watched films of his races, I noticed that he liked to race covered up,” Delacour said. “In each of his workouts I wanted to get him a little more fit and then see how we would train in company. The first time (Aug. 20) he went four furlongs by himself, but his last three workouts (Aug. 27, Sep. 3 and Sep. 10) he worked in company with other horses. We had to put him on Lasix because he had showed signs of bleeding in his last couple of races in France. When Feargal set him down at the three-eighths, he really responded and the best part is he galloped out really well, so he had plenty of horse left.”

Canessar arrived with three wins in six starts this year at Saint-Cloud and Chantilly Race Courses in France, including a minor stakes score. Saturday’s win marked the four-year-old gelding’s first win in a six-figure event.

Delacour said that his next start will be the Grade 3 Sycamore Stakes at Keeneland Race Course on October 19, also at the 12-furlong distance. The Grade 1 Breeders Cup Turf on Nov. 4 is not in Canessar’s schedule, Delacour said.

“I’ll have to wait and see how he comes out of this race, but he finished up really well and at this point we’re looking to the Sycamore at Keeneland for his next start,” Delacour said. “The Breeders’ Cup comes up a little too close to the race at Keeneland for me to consider trying him there. But he definitely looks like he’s going to love the longer races here. He came into it training really well, and he really showed a strong finishing kick and I liked the way that he galloped out. That race at Keeneland should fit him perfectly.”

Canessar had won three of five starts including the $58,000 Prix la Moskowa Stakes at Chantilly on June 23 before struggling home eighth in a field of 10 runners in the Group 2, $148,000 Prix Maurice de Nieuil Stakes at Saint-Cloud on July 14 behind Talismatic, Marmelo and Sirius.

His triumph in the Laurel Turf Cup on Saturday afternoon was his first start in the United States and his first on Lasix and perhaps confirmed his new trainer’s belief that the gelding bred by the Haras De SA Aga Khan has ample time ahead to live up to his potential.

“When I got him we knew that he had the ability to be really good on the turf here, but he definitely needed Lasix,” Delacour said. “Personally, I have never trained a horse bred by the Aga Khan, but I’ve worked for trainers in the past who had horses with the Aga Khan, so it’s nothing that new to me. He ran really well today and now we’ll see how he quickly he bounces back and then we’ll see how he does at Keeneland before we make further plans with him.”