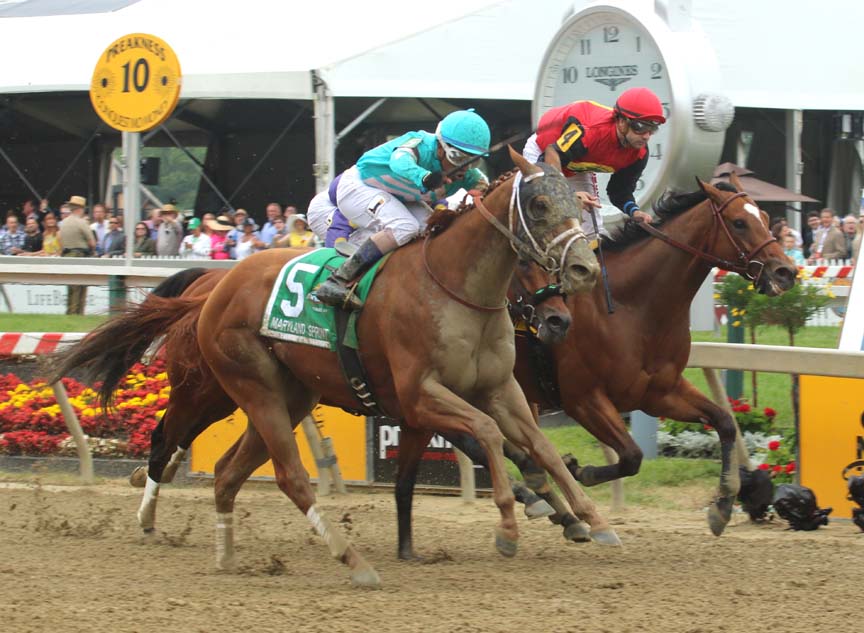 Whitmore (#5) was up late to win the G3 Maryland Sprint. Photo by Laurie Asseo.

More than three months since suffering the first loss of his sprint career, multiple Grade 3 winner Whitmore makes his return to the races with designs on starting another streak in Saturday’s $250,000 Xpressbet Frank J. De Francis Memorial Dash (G3) at Laurel Park.

The 26th running of the six-furlong De Francis for sprinters 3 and up highlights seven stakes, six contested over Laurel’s world-class turf course, worth $900,000 in purses on a 12-race Fall Festival of Racing program that drew a total of 125 entries, an average of 10.4 starters per race.

Named for the late president and chairman of Laurel and historic Pimlico Race Course, the De Francis was moved up this year from its mid-November spot on the Maryland racing calendar. Past winners of the prestigious sprint include Hall of Famer Housebuster and fellow sprint champions Cherokee Run, Smoke Glacken, Thor’s Echo and Benny the Bull.

Kentucky-based trainer Ron Moquett won the De Francis in 2015 with Gentlemen’s Bet, who finished second but was promoted to first following the disqualification of Trouble Kid for interference. He comes back this year with Whitmore, a horse he co-owns with Robert LaPenta and Head of Plains Partners.

Beginning with his debut victory in November 2015 at Churchill Downs and an optional claiming allowance triumph to kick off his 3-year-old campaign in January 2016 at Oaklawn Park, Whitmore reeled off seven consecutive wins at sprint distances. He capped the run with a half-length decision over A.P. Indian, a multiple Grade 1 winner and finalist for 2016’s sprint champion, in the Maryland Sprint (G3) May 20 on the undercard of the Preakness (G1).

“He likes to win. His personality, he’s got the will to win and he’s got the body to follow through with it. He’s a cool horse,” Moquett said. “Our major goal is the Breeders’ Cup. This leads us toward that goal plus the De Francis is a historic race and it would be a feather in our cap to win it.”

In his last race Whitmore found himself last through a half-mile in the six-furlong True North (G2) June 9 at Belmont Park and had to make his rally on the extreme outside under regular rider Ricardo Santana Jr., winding up third, beaten 6 ¼ lengths.

Moquett had hoped to bring the gelded son of Pleasantly Perfect back in the Alfred G. Vanderbilt (G2) July 29 at Saratoga but was forced to withdraw from consideration the day entries were taken.

“He pounded his foot traveling on the plane and he basically dislodged his shoe. It caused him to be sore, but it was just very temporary,” Moquett said. “The timing was unfortunate but I’m just glad he’s OK.”

Whitmore has trained forwardly since then with four works at Churchill Downs topped by a bullet five-furlong breeze in 1:00.60 Aug. 27. Most recently he went a half-mile in 47.60 seconds Sept. 10, fifth-fastest of 56 horses.

Moquett has kept Whitmore going short following a trip down the Triple Crown trail last year that ended when he ran 19th in the Kentucky Derby (G1). He didn’t race again for nearly seven months and proceeded to win five straight including the Count Fleet Sprint Handicap (G3) and Hot Springs at Oaklawn Park this spring.

“We’re trying to develop him into the horse that can make the most money,” Moquett said. “As a 3-year-old, you have no shot to make good money as a sprinter. They were beating me up on the radio [about running long last year]. He only made $463,000 in six starts. It’s not like he didn’t run well.

“I didn’t like the way he came out of the Kentucky Derby, stiff everywhere. That’s one of the reasons I’ve kept him short,” he added. “Obviously he’s good at it, but the other reason is it’s so easy on him. He comes back and has caught his breath before he gets to the test barn.”

Feargal Lynch has the call on Whitmore from Post 4 at topweight of 122 pounds, four more than each of his six rivals.

Jacks or Better Farm homebred Awesome Banner, a multiple stakes winner based at Laurel with trainer Ken Decker, seeks his first victory in nearly a year in the De Francis. The 4-year-old Awesome of Course colt captured the Florida Sire Stakes’ Foolish Pleasure last October at Gulfstream Park and finished first in his subsequent start, the Steel Valley Sprint at Mahoning Valley, but was disqualified to second for interference.

Since then Awesome Banner has run in seven more stakes, six of them graded, with two seconds and two thirds. He is winless in six tries this year, finishing second in the Smile Sprint (G3) July 1 at Gulfstream and the Vanderbilt at Saratoga, his most recent start.

Each of Awesome Banner’s last three races, including a third behind Whitmore and A.P. Indian in the Maryland Sprint, have come since removing the blinkers he wore when last of nine in the seven-furlong Carter Handicap (G1) in April at Aqueduct.

“I would say he’s probably hooked some of the best sprinters in the country,” Decker said. “We tried a little equipment change in the Carter and he didn’t seem to like it but we came back in the Maryland Sprint and showed that was probably what we had going on. Since then he’s been right there. He’s been keeping some pretty good company.

“He gets a little overlooked on the tote board but we don’t let that bother us. We go out there and he’s been showing up,” he added. “Everything looks good right now and hopefully we get the same thing on Saturday. We’re hoping he’ll make a good showing and I think that we will. Everything seems to be real good right now. We’re hoping he stays on target and shows up again on Saturday.”

Leading South Florida jockey Tyler Gaffalione ships in for the mount from Post 3.

Taking a step up into graded company for the first time in the De Francis will be Mark Sitlinger’s 5-year-old Curlin gelding Struth, winner of the Hockessin Stakes July 15 at Delaware Park in his third start since being claimed by trainer Kieron Magee for $20,000 out of a May 14 win at Laurel.

Struth has seven wins and six seconds from 19 career starts and has finished first or second in seven of 11 lifetime tries at Laurel with a pair of victories. Last out he was second by 3 ½ lengths to Blu Moon Ace in the Coalition at Timonium, and 4 ½ lengths clear of third. Prior to that race he was sixth as the favorite in the Senator Robert C. Byrd Memorial Aug. 5 at Mountaineer following a tardy beginning.

“He just walked out of the gate and got into trouble and it was over. He’s just a horse that you have to get him out of the gate. You can’t just sit there and let him break on his own. You’ve got to help him out of there and put an aggressive rider on him,” Magee said. “Three-quarters hits him right between the eyes. It’ll be the toughest race he’s ever run in, but I think he deserves a shot at it.”

Struth drew the rail post and will have the services of jockey J.D. Acosta.

David Melin, Leon Ellman and Laurie Plesa’s Grade 3 winner Mr. Jordan wheels back in three weeks and shortens up for the De Francis following his third-place effort in the 1 1/8-mile Iselin (G3) Aug. 26 at Monmouth Park, where he stalked the pace and dug in before being passed late and beaten less than a length for second.

The Iselin was just the second race since April 1 for Mr. Jordan, who returned with a five-length allowance win going seven furlongs July 18 at Parx. The 5-year-old Kantharos gelding, trained by Eddie Plesa Jr., won the Juvenile Sprint and Smooth Air at 2 and the 2015 Pegasus (G3) at Monmouth in the summer of his 3-year-old year.

Hall of Famer Edgar Prado has been named to ride Mr. Jordan from Post 2.

David Gruskos’ Chublicious, a multiple stakes winner with eight of his nine career wins coming at six furlongs, goes for his first graded score in the De Francis. Three of his previous four stakes victories have come against fellow New Jersey-breds, most recently his second straight triumph in the John J. Reilly Handicap July 30 at Monmouth.

Winner of the open Mr. Prospector last summer at Monmouth, Chublicious has raced twice previously at Laurel, finishing fourth in the Dave’s Friend to cap his 2016 season and second in the Fire Plug to open 2017. Laurel summer meet-leading rider Victor Carrasco will be aboard from Post 6.

PJG Stable’s four-time stakes winner Favorite Tale is entered to make just his second start of the year in the De Francis. The gelded 6-year-old son of Tale of the Cat has raced only twice since winning the Fabulous Strike in November 2015 at Parx, but owns graded sprint wins in the 2015 Smile Sprint (G2) and 2014 Gallant Bob (G3). Paco Lopez rides from outside Post 7.

Completing the De Francis field is Michael Foster’s Blu Moon Ace, winner of the Aug. 26 Coalition first time off a $30,000 claim for trainer Kevin Patterson. Gerald Almodovar has the call from Post 5.