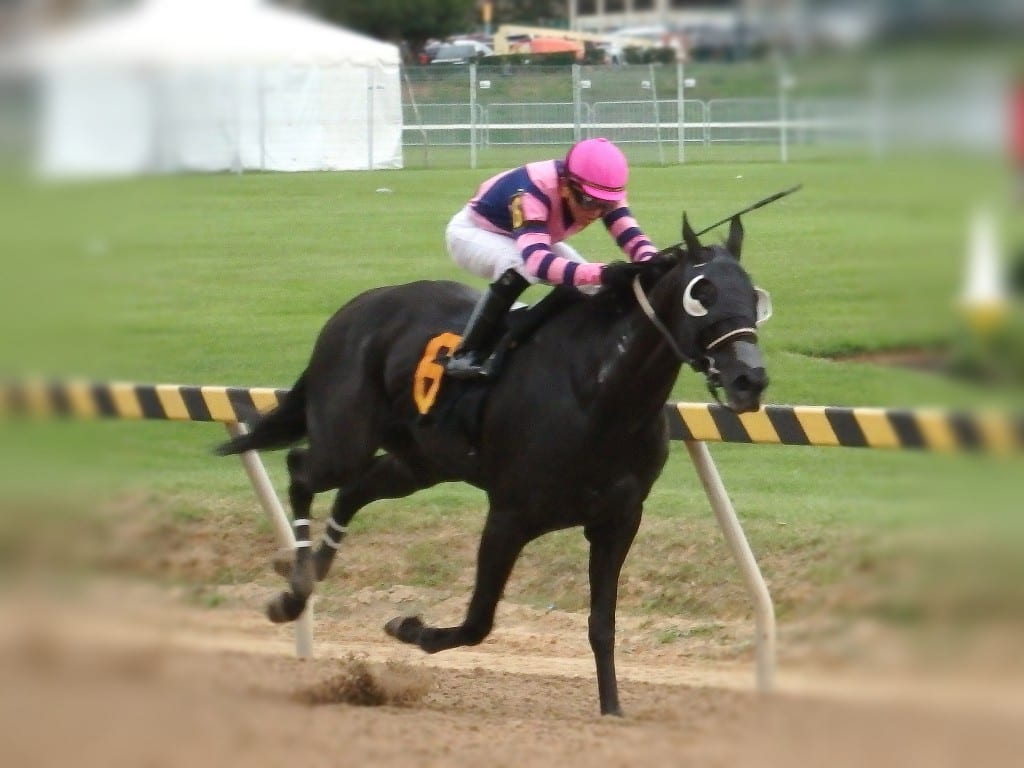 Willie B Mine won an allowance at Timonium. Photo by The Racing Biz.

Most people who decide to get into horse racing buy into a partnership or claim a couple or even head to the sale.

Dan Green took a different route, buying Roman Tango, a Horatius mare who at the time was in foal to Lion Hearted.

“Without his wife’s knowledge,” interjected the wife in question, Tamara Sobel.

Friday at Timonium, the product of that breeding, a six-year-old gelding named Willie B Mine, sped to the early lead and never looked back en route to winning the day’s featured race, a $36,000 allowance/optional claiming event for three-year-olds and up going 6 ½ furlongs.

The win was Willie B Mine’s fifth, and the winner’s share of the purse will push his earnings to the brink of $200,000.

Not bad for a horse trainer Ann Merryman describes as “eccentric.” She credits Green and Sobel for their patience with him, and they credit her for her horse-friendly approach.

“Ann lives right around the corner from us,” Green, a physician by training who owns a small farm in Sparks, MD, explained. “She brings the horses home for a respite, and they get a chance to be horses. From a welfare perspective, we think that’s the best.”

Willie B Mine, a Maryland-bred, endured a winless 2016 campaign and had spent much of this year knocking on the state-bred allowance door. He’d been second twice – once beaten just a half-length after leading late – third once, and beaten less than three lengths while out of the money on two other occasions.

Friday, with Kevin Gomez in the irons, Willie B Mine made sure there was no repeat of those failures. The running time for 6 ½ furlongs was 1:17.06, and his margin of victory was 1 ¾ lengths over Max Crown, with Leather Goods another neck back in third. Willie B Mine, the favorite, returned $5.80 on a two-dollar wager and topped an exacta good for $35.20.

He also, Green pointed out, burned a condition. Now having won an allowance race, he will no longer be eligible for the Maryland-bred a-other-than.

Still, neither he nor Sobel was complaining.

“It’s really exciting,” Green said. “When you know a horse for that long, it makes it all the more special.”

Sobel, who seems now to enjoy her husband’s surprise purchase, was even more effusive. “It’s like winning the Preakness,” she said.

NOTES  In the other division of Willie B Mine’s allowance, Ackeret was along late to win a frantic finish that saw four horses finish within one-half length of each other. Ackeret is trained by Wayne Potts and was ridden by David Amiss… Ackeret was one of two winners on the day for Potts and owner Rohan Ramdat… Mr. October won a four-furlong allowance dash earlier on the card under Edwin Gonzalez. Mr. October is trained by Kieron Magee for Helen Marshall… With three days left in the meet, J. D. Acosta retains a two-win lead in the jockey standings over Gerald Almodovar. Among trainers, Claudio Gonzalez leads with three wins; six trainers have two victories, among them Beth Worton, who has two wins and a third from just three starters… Friday’s handle was a robut $974,778…