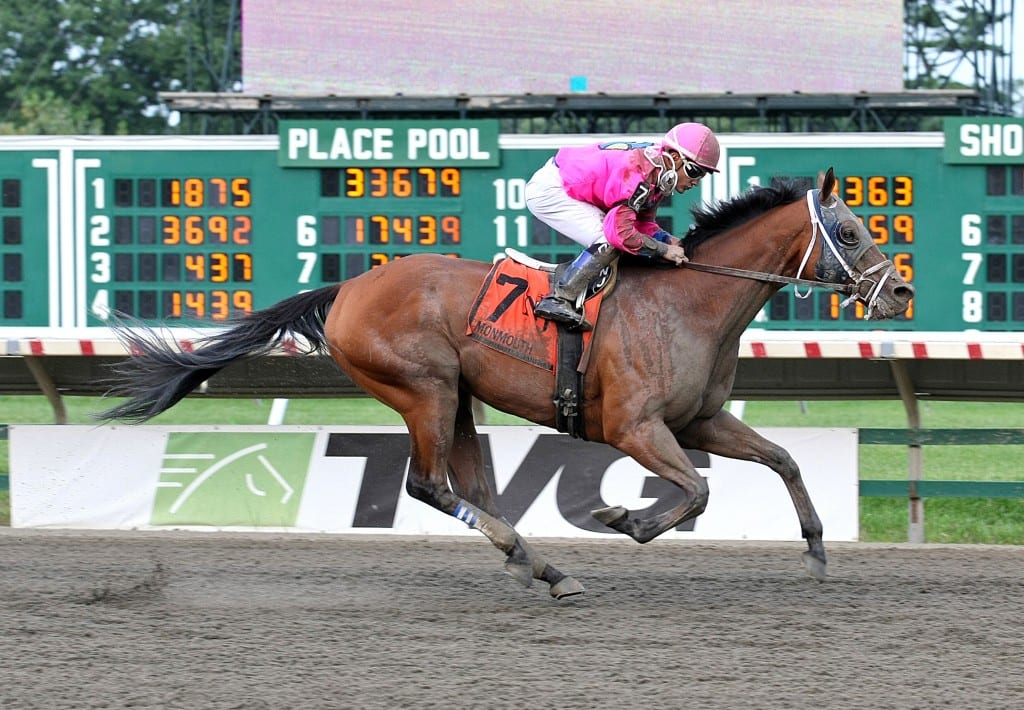 Rock Talk Farm’s Fuzzy Muzzle closed with determination down the center of the track to run by odds-on favorite Chublicious in the final 1/16th en route to a 3 ¼ length victory in the $60,000 Charles Hesse III Handicap before a crowd of 10,712 on New Jersey Thoroughbred Festival Day at Monmouth Park, featuring the best runners bred in the Garden State.

“His style is to sit back and make one run,” said Nik Juarez, who leads the rider standings at the meet. “I wasn’t too worried about the quickness up front. He just has a really good turn of foot coming down the lane. I just wanted to give him a clear run going for home.”

Fuzzy Muzzle captured the Hesse Handicap in 2015 and was runner-up last year before coming back to take it again on Sunday. The 8-year-old gelding by Closing Argument from the Victory Gallop mare Hope’s Folly, has captured eight of 28 starts with earnings of $315,224.

The New Jersey Breeders’ Handicap saw Rainbow Heir shoot through on the inside and draw away late to score by a length and a quarter in the 5 ½ furlong turf sprint.

“He broke great,” said winning rider Antonio Gallardo. “I wasn’t worried about getting stuck on the rail. I knew I had a lot of horse and I know carrying 127 pounds is a lot so I thought it would be best to save some ground and not move too soon. He’s a very easy and professional horse. When you ask him, he gives you everything.”

Bred and owned by New Farm, Rainbow Heir is a 7-year-old by Wildcat Heir from the Prospectors Gamble mare Rainbow Pride. He sports a record of 12-3-4 from 28 outings, good for earnings of $621,405.

In the first of three stakes races on the card, Bustin Out jumped out to the early lead and never looked back, cruising to a two-length victory in the $60,000 Eleven North Handicap.

“I never really asked her, she was so smooth the whole way around,” said winning jockey Jose Ferrer. “She broke so sharp, like always, and has that natural speed that makes her dangerous. They never really got close early and that was the end of it.”

Owned by Joseph and Gayle Ioia, Bustin Out has won nine of her 18 career starts, with earnings of $344,132. The New Jersey bred distaffer is by Bustin Stones from the Disco Rico mare Disco Shaker.