At Timonium, many happy returns 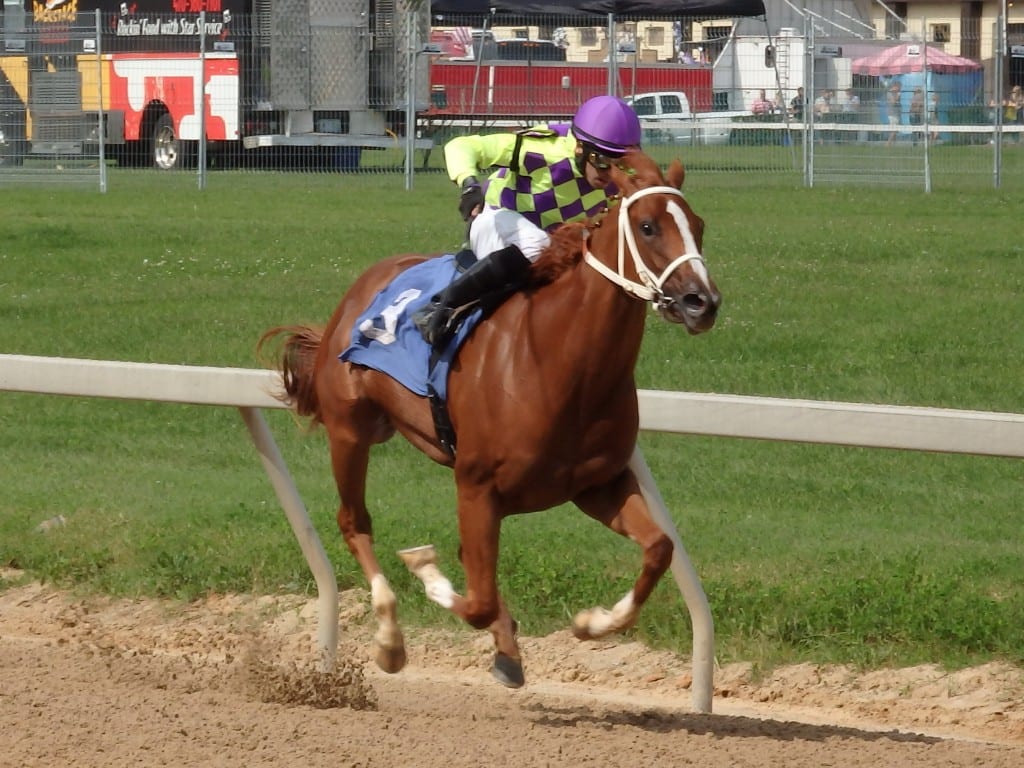 “We love Timonium. We’ve always been here,” Charlie Frock said today after the sixth race at the Big T. “My dad was here for 30 years. We got a box right here at the wire. I love to support Timonium.”

The trainer, celebrating his 74th birthday, had plenty to celebrate. His runner Greeley’s Bustnout had just motored to a length-and-a-half victory, navigating the four furlongs in 45.87 seconds. That result spurred a big cheer, both from friends and family gathered around him and from fellow boxholders yelling down towards the track.

It was, for lack of a better term, a true Timonium moment.

“I like this filly because she’s got a ton of speed,” Frock said of the sophomore Bustin Stones filly who posted the third win of her career.

Greeley’s Bustnout rushed clear leaving the chute to the lead, leaving 7-10 favorite Brooksie Robinson in her wake through an opening quarter-mile in 21.95 seconds. Brooksie Robinson packed it in after that and faded to last.

For a moment, Frock said, he thought his exacta box involving his horse and Brooksie Robinson was going to give him even more to celebrate.

Maybe not the best betting outcome, but Frock was in more of mood to celebrate his good fortune than bemoan the bad.

The same was true one race earlier, when Hip Hop blazed to a nearly-eight length win in a $35,000 maiden special weight race for trainer John Salzman, Sr.  Hip Hop, a two-year-old daughter of Drosselmeyer owned by Kenny Taylor, Track Makin, and Alan Kron, now has a win from three starts.

While Taylor and Salzman have long raced together — they were the team behind Hall of Famer Xtra Heat — the experience is somewhat newer for Kron and Makin.

“It’s our first horse,” Kron said. “We bought her at the Timonium sale. John Salzman saw her coming in the ring, and he really liked what he saw.

“Kenny Taylor and I and my girlfriend — we own half and Kenny owns the other half,” he continued. “I met Kenny 10 or 15 years ago at Pimlico. One thing led to another and he said, ‘If you’re interested, let’s go buy a horse.'”

One trip to the Fasig-Tipton May two-year-old sale — and $37,000 — later, Kron, who owns a construction business, and Makin had their first runner. Three races, and three months, later, they now have a winner.

“It feels great,” he said. “We’d been looking for it. We put a good jockey (Gerald Almodovar) on her, a great trainer.”

How much has Kron been enjoying the racing game?

“We really wanted to get into this game,” he said. “We actually just bought our second horse.”

Ruby’s Fire, their second horse, will race Friday at Timonium.

There was only one problem, Kron said.

Like Frock, though, he wasn’t complaining. He was, after all, standing in the winner’s circle — the happiest place at the track.