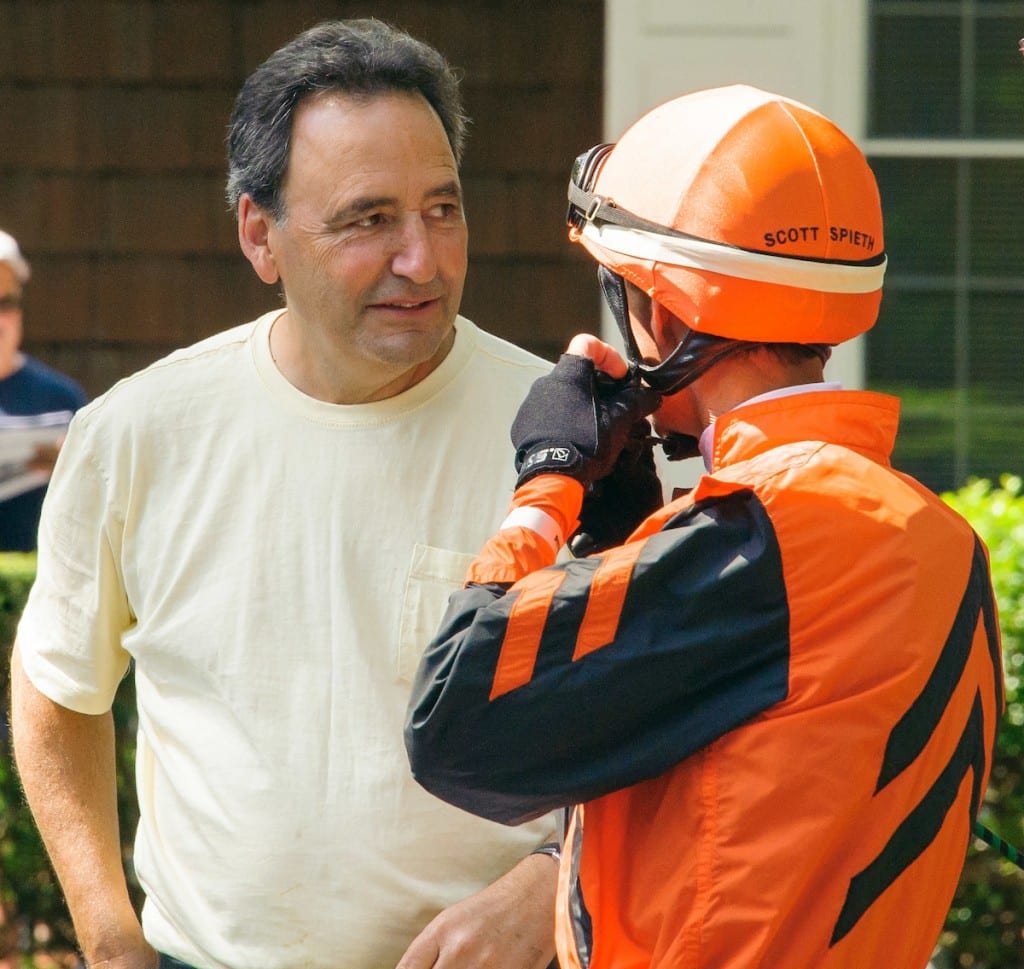 Andrew Simoff talks it over with a jockey. Photo by HoofprintsInc.com.

Andy Simoff was 16 years old in 1973 when his father Abe sent his prize 3-year-old Leo’s Pisces to the Fair Grounds to run in the Louisiana Derby. Leo’s Pisces scored a huge upset in the longstanding stake, paying $109.80 and for Simoff, the thrill of being part of that experience made it official.

“I knew then and there I was going to spend my life in racing in some way, shape or form.” Simoff said recently.

But if having racing in his blood and wanting to be a part of the business were one thing, trying to find a niche in the industry was something else. His father never had the financial independence to be able to keep more than a few horses at a time as an owner, and while young Andrew went about learning the basics of the business as first a groom then later an exercise rider for New Jersey mainstay trainer J. Willard Thompson, he was still searching for something that would provide him with a living while allowing him to be a part of the game he loved.

Then in the early 1980s Simoff found the answer.

“I saw the big van companies shipping in and out of Monmouth and found out that often it was difficult for local horsemen to book trips to tracks around the Mid-Atlantic region for their horses. The bigger van outfits concentrated more on trips to New York, Kentucky, and Florida,” Simoff explained. “I bought a small three-horse van to start, and I would freelance as a gallop boy in the morning if I didn’t have a trip lined up. I found out pretty quick there was a calling for short-haul bookings from tracks like Monmouth to Laurel or Delaware Park and Keystone (Parx), Penn National and Charlestown. The business grew, I wound up buying more vans, and before long Andrew Simoff Horse Transportation was a going concern.”

But while his van business continued to grow and prosper, Simoff still wanted to be on the backstretch in the morning, working with horses. Around 1987 a situation arose that thrust Simoff into the training side of the game: his father, who’d always wanted to ride horses, decided to try his hand at it.

“He owned a few horses at that time that he’d been taking care of himself, and he asked me to take over the training of those horses,” Andy Simoff said.

Simoff took out his trainer’s license that year, and while his father’s riding career never really took off, Simoff continued to train, in essence juggling two careers every day.

“We’ve got 10 horses this year which is more than we usually carry, and we’re having a pretty good meeting (Simoff has 6 wins at the Delaware Park meeting and has a 24 percent success rate). I have three or four with outside owners and own the rest myself. We’re never going to be leading trainer but considering we’re actually handling two organizations at the same time, I think we’re doing quite well.”

The van company has grown and expanded through the years,  “We now have six tractor-trailers and five box vans for a total of 11 we can put on the road at one time if we have to,” he pointed out, “and during peak periods, like the spring and fall, we can have 20 people on the payroll. During the winter that figure drops to 10 when racing cuts back for the winter. The business has been good to me and my family. I’ve been able to put my kids through college and we ship for most of the top outfits in the region, people like John Servis and Jorge Navarro.”

Simoff said that the shipping business can sometimes benefit his training, too.

“It’s funny how the training and van business can overlap sometimes,” he said. “I might have a problem with a horse, and in the course of booking a trip I may pick their (the trainers’) brains about how they might deal with the situation. You’re never too old to learn a new or different way to deal with horses.”

Simoff’s work day begins at 5:00 a.m. when he travels from his farm in Unionville Pennsylvania to Delaware Park, “I’m at the barn or out on the track with the pony, then I wrap things up at the track around 10:30 a.m. and head to our yard in Marshallton. I set up the shipping schedules, pay the help, and deal with the paperwork and red tape that you have to deal with. Then I try to head back out to the track and catch the last few races.”

Simoff is an unabashed fan of Delaware Park as a place to train and race.

“I don’t think there’s a better place in the country to stable and train horses.” Simoff stated. “There’s a training track, a turf gallop, and the main track is a great surface to train over. And on the backstretch there are places where you can graze your horses and give them time out of the stall in the afternoon. Just look at the trainers who are stabled here, Jamie Ness, Larry Jones, Michael Stidham, they’re top outfits. I have to tell you, if this place were to close I’m not sure I’d keep on training. I just can’t see myself with a stable of horses somewhere else most of the year.”