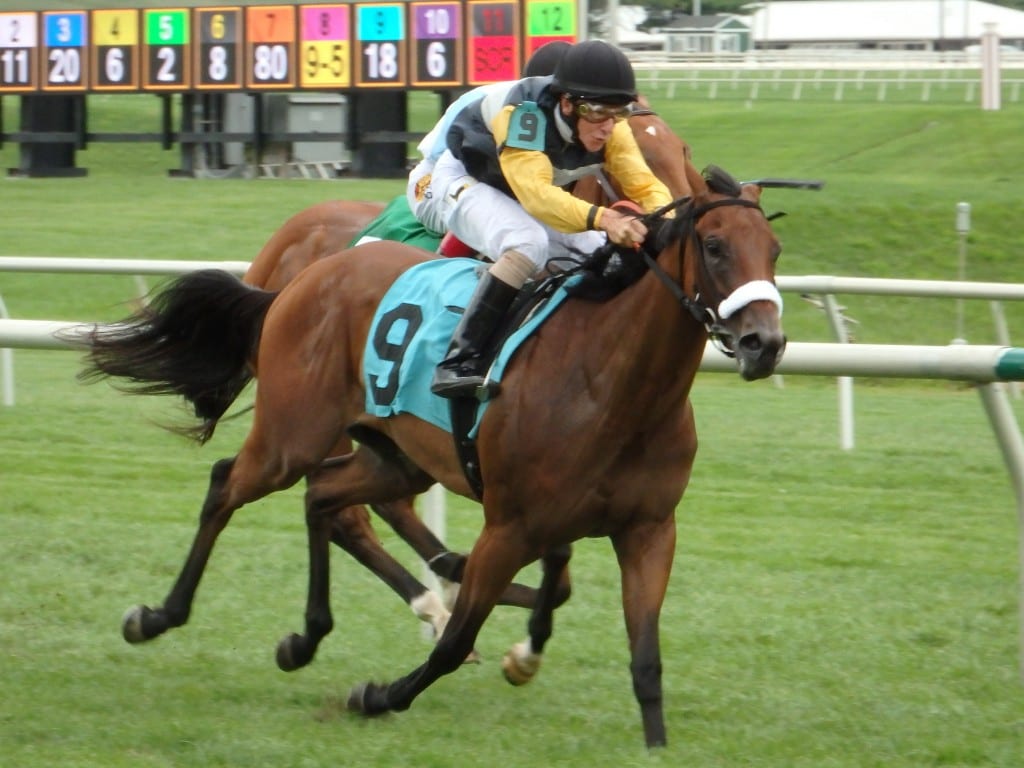 Wise Gal was best in a maiden race at Laurel Park. Photo by The Racing Biz.

Back in January 2004, Spirited Game broke her maiden at first asking at Laurel Park, powering to victory in a 5 1/2 furlong sprint.

Friday at Laurel, Spirited Game’s daughter, Wise Gal, reprised that feat, battling to a half-length score in a turf sprint in a $40,000 maiden special weight test.

Safe to say that owner Eric Wirth would be pretty happy if Wise Gal lived up to mom’s example. After all, Spirited Game won two stakes and earned over $270,000 in her career.

In fact, Houghton said, putting the Einstein filly in this race was almost more a matter of luck than of design.

“She’s been training well on the dirt for us,” the trainer explained. “I thought her pedigree would lean towards turf, so when I saw this race, I said, ‘Let’s just try, give her a run.'”

Spirited Game, by Not for Love, did her best work on the dirt. But she also ran a couple of credible races on the turf, showing the versatility of many of Not for Love’s offspring.

Einstein, of course, earned nearly $3 million and won Grade 1 events on both turf and synthetic. He also was a Grade 2 winner and Grade 1-placed on the dirt, finishing in the top three in three Grade 1 tests, making him among the most versatile runners of his era.

Just giving her a try certainly worked out to best advantage today. Under jockey Steve “Cowboy” Hamilton, Wise Gal moved up smartly while wide on the turn to reach even terms with Lake Geneva, who’d been slugging it out with Hip Hop for the lead.

Wise Gal looked like she might simply go on with it, but Lake Geneva found more, and those two fought it out most of the way down the lane. Finally, Wise Gal prevailed by a half-length in 1:04.22 over firm turf. Lake Geneva was second, and the apparent hunch play of the day, War Tweet, was third.

Wise Gal, dismissed by the bettors, returned $38.80 to win and topped a $170.60 exacta. The favorite in the race, Sagamore Farm homebred Drops and Buckets, was never involved and finished ninth.

Houghton said she wasn’t sure what might be next for Wise Gal, except that “it’ll be here in Maryland.”

With a horse likely to thrive on both turf and dirt, and possibly able to handle more distance — “We think she’ll go a little longer,” Houghton said. “(Hamilton) said she rated and relaxed very well today” — finding spots shouldn’t be too hard at all.