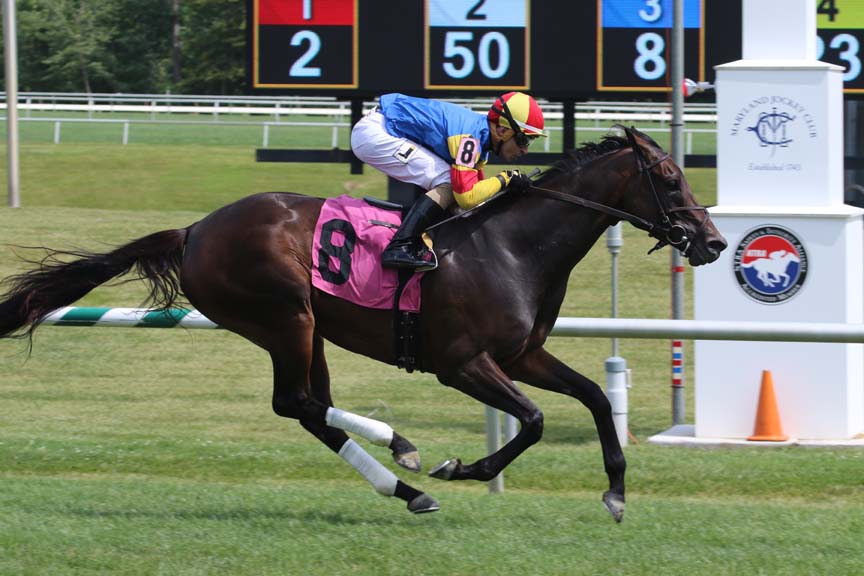 Special Envoy and Queen Caroline, impressive stakes winners in their last trip to Maryland, are among 95 Virginia-bred/sired horses nominated to a four stakes worth $300,000 over Laurel Park’s world-class turf course Saturday, Aug. 5.

Mr. & Mrs. Bertram Firestone’s Special Envoy ran down recently retired multiple stakes winner Rose Brier to capture the one-mile Edward Evans by a nose June 24 at Laurel. The Arnaud Delacour trainee is among 27 nominees in the $75,000 Hansel for 3-year-olds and up at 1 1/16 miles.

The $75,000 William M. Backer for fillies and mares three-years-old and up at 1 1/16 miles attracted 20 nominations led by Amy Moore’s Queen Caroline, a front-running 1 ¼-length winner of the one-mile Nellie Mae Cox June 24 at Laurel. Fourth in the Gallorette (G3) May 20 at historic Pimlico Race Course, the 4-year-old daughter of Blame followed a victory in the 2015 Nellie Mae Cox with back-to-back stakes at Indiana Grand last summer and fall.

Tiz Our Time, gate-to-wire winner of the 5 ½-furlong White Oak Farm June 24 at Laurel, stakes-placed Complete St. and My Dinah Lee, and Firestone-Delacour stablemates Armoire, second to Queen Caroline in the Nellie Mae Cox, and Well Blessed, a winner of her last two starts at Delaware Park, are also nominated.

Tiz Our Time is among 17 nominees for the $75,000 Meadow Stable for 3-year-olds and the $75,000 Camptown for females 3 and up, both at 5 ½ furlongs. The Meadow Stable drew 17 nominations including fellow stakes winners Lime House Louie and Two Notch Road, while stakes winners Ring Knocker, Exaggerated and Do What I Say – the latter coming off a victory in the 5 ½-furlong M. Tyson Gilpin June 24 at Laurel – top 21 nominations to the Camptown.