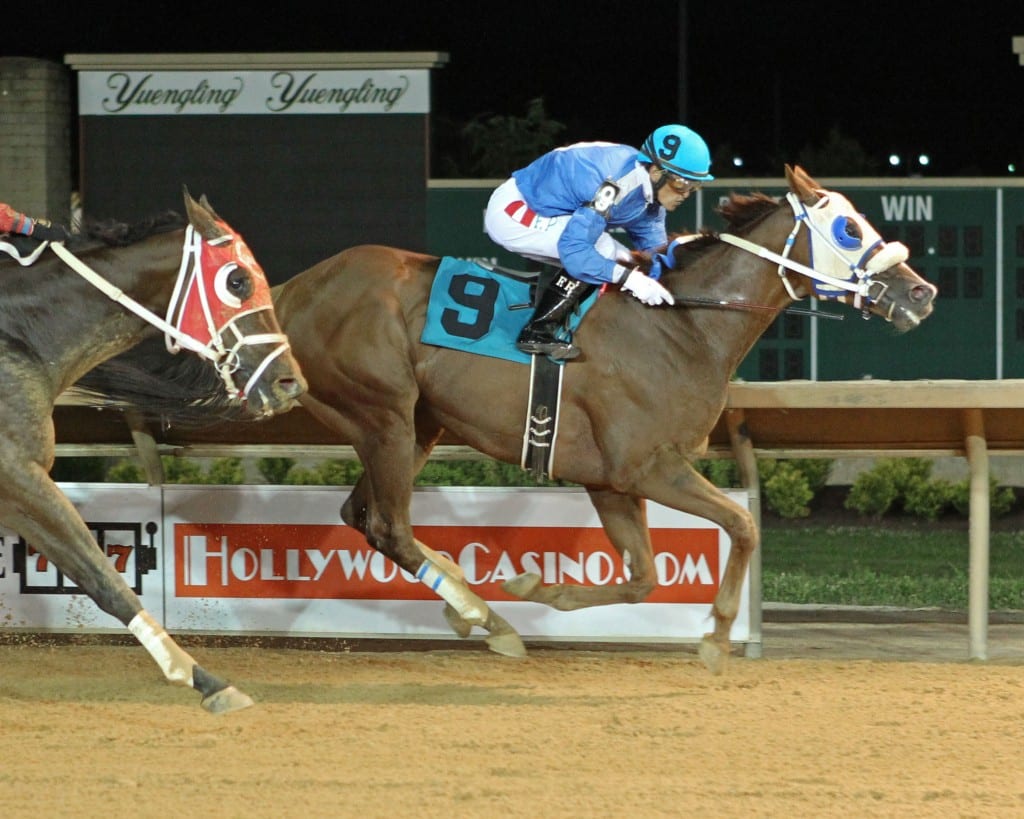 As Collins has hoped, Primary Account benefited from the year off. He returned fresh and fit, winning four times in nine starts in a little more than half a season’s work last year. And this year at age eight he has already recorded three wins from six starts and given Collins a clear indication of what his future holds.

Collins, 54, whose barn has 13 wins from 134 starters this year, mostly at Charles Town, purchased the Mutakddim gelding soon after his start on June 27, 2015 and promptly sent him. Collins could not find anything seriously wrong with the gelding who began his career under the guidance of Crystal Pickett for owner-breeder Francis Daniel, but the gradual collection of race track aches and pains had taken their toll on him.

“When I decided to give him some time off, it just seemed like the best thing for him,” said Collins, who has saddled 185 winners with earnings of over $3.25 million in his career. “He just needed to get away from the track for a while and recover from all of the racing that he had done. Sometimes the best way to train them is to just give them time off and let them get healthy and happy again. After he was off six, seven months, he really started showing signs that he wanted to run again, and we took him to the track to begin galloping him and he seemed like a new horse.”

Primary Account notched his first career victory in his second lifetime start on January 17, 2012 for Pickett and later won allowance races for her on March 29 and June 14 of that year. Pickett also tried him in a pair of West Virginia-bred stakes for three-year-olds where he finished third in the Robert Leavitt Memorial and then was fifth in the West Virginia Lottery Breeders Classic. But 2013 and ’14 proved to be lean years for Primary Account and he did not win another race until December 6, 2014 when he defeated $8,000 claimers.

Primary Account won a couple of claiming races In 2015 before Collins purchased him after his eighth-place finish Primary Account won one claiming race for trainer Jeff Runco and another for Haynes, but after an eighth place finish against $5,000 claimers on June 27 of that year, Collins has had three prior trainees earn at least $100,000 under his guidance, including Autumn Affair, who posted a 6-7-5 slate and $185,000 bankroll from 49 outings, Lil Bright Berry, who sported a 6-5-6 slate and $133,500 banked from 33 tries, and Covert Affair, who had a modest 5-8-6 slate and $125,000 bankroll from 48 lifetime tries.

In each of his first two starts back for Collins last summer, Primary Account finished second against $5,000 claiming races then ventured to Belterra Park in Ohio to defeat $4,000 claimers by two lengths in a 6 1/2-furlong affair by getting the distance in 1:17.87. He then finished fourth in a claiming race at Suffolk before returning home to more familiar surroundings at Charles Town to conclude his seven-year-old campaign and shed some light on what his future might hold.

“Like they say, if it ain’t broke then don’t fix it,” Collins said. “He ran well in his first two starts back for me against $5,000 claimers and then he won that race at Belterra and I knew he was going to be eligible for the starters [races restricted to horses that had started for a claiming price of $5,000 or less] here and anywhere. I’ve always just wanted to put him in spots where he could be competitive. I’ve always tried to do that with all of my horses.”

Collins patience was rewarded further when Primary Account won his next two starts at Charles Town on September 21 and then nine days later on Sep. 30 before running seventh in the Onion Juice Breeders Classic. But Primary Account immediately rebounded to win his next start at Charles Town on October 29 by getting the seven panels in 1;27.79 before concluding his campaign with a fifth-place finish.

This season, Primary Account has won three times and is working on a five-race streak in which he has not finished worse than third. Most recently, he defeated Rockhopper Penguin by three-quarters of a length to win an allowance/optional claimer at the $12,500 level. That win, his 13th from 48 career starts, pushed his lifetime earnings to $168,191, just over $60,000 of that under Collins’ tutelage.

“That last race came up pretty tough,” Collins said. “It was an allowance/optional $12,500 claiming event and a starter which he fit. He came into the race just right and it set up pretty well for him and he ran a big race. There’s another race with similar conditions for him here on July 29 and depending how well he does there we might try him in the Frank Gall. I’m not sure he’s really a stakes horse anymore. But he loves being at the track. He loves racing. He really enjoyed his time off and he got healthy at the farm, but he prefers to be at the track with other race horses.”