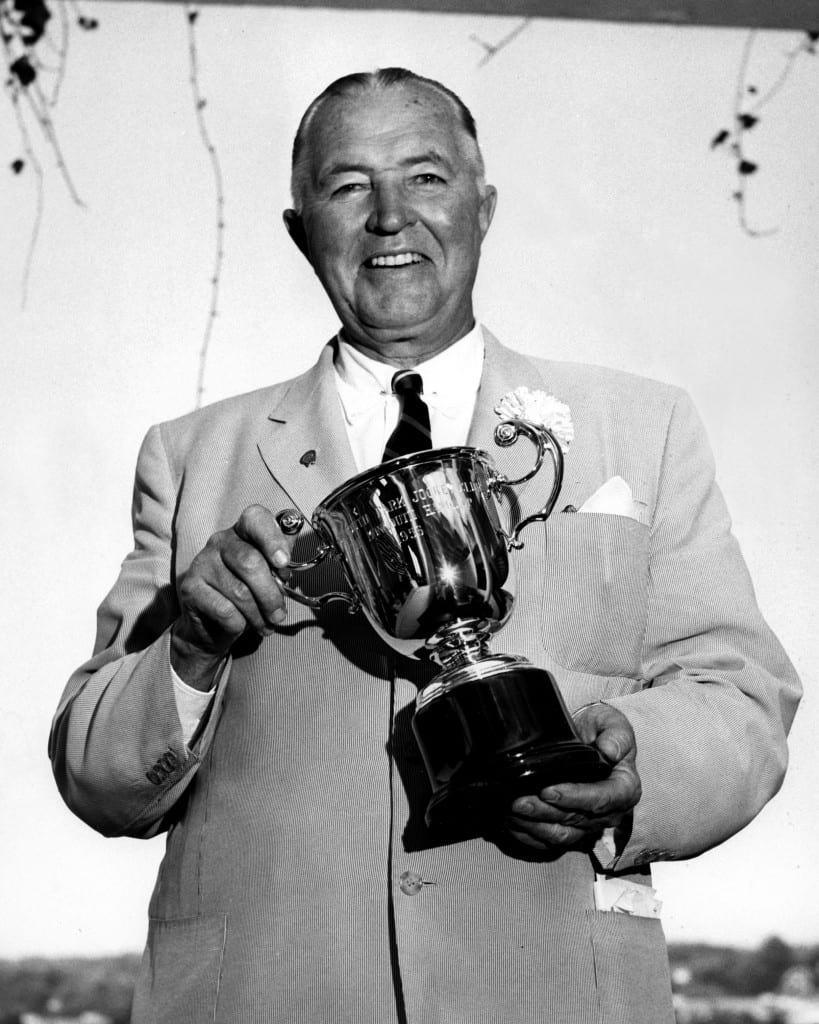 The Grade 1 Haskell Invitational, contested each year at Monmouth Park, is named in honor of the track’s first president and driving force, the late Amory Haskell. In Sunday’s 50th renewal, one of the top contenders will be Irish War Cry, owned by Isabelle de Tomaso — one of Amory Haskell’s two surviving children.

When New Jersey voters passed an amendment in a special election on June 20, 1939 to legalize racing and pari-mutuel wagering in the state, no man was more dedicated to bringing a racetrack to Monmouth County than Amory Lawrence Haskell.

Haskell had the proverbial “silver spoon” in his mouth from the day he was born in November, 1893, to Jonathan Amory Haskell and Margaret Riker Haskell. His father was a vice president of General Motors Corporation and E. I. du Pont de Nemours Co., which prompted several newspaper reports to dub him the “powder magnate,” as he headed up duPont’s Smokeless Powder Division. The family maintained residences in Manhattan and at their 240-acre Oak Hill Farm in Red Bank, N. J., and wintered (or “spent the season”) in Palm Beach, Florida.

Young Amory, who was born in Manhattan, was fascinated with horses at a young age. “He was not much more than a toddler when his interest in horses began,” wrote Hy Cunningham in the Red Bank Register. “When seven years old, Mr. Haskell was an accomplished rider and had acquired an interest in hunters. He was guiding them over the hurdles at that age. This early interest held and held, grew and grew.”

Haskell attended the Pomfret School, an elite boarding school in Pomfret, Connecticut, and graduated from Princeton University in 1916. With an Ivy League education under his belt, and thanks to his father’s influence, he then began a business career with the New Jersey Zinc Company. That was interrupted by two years with the Naval Aviation Service in World War I. After his tour of duty, Haskell joined the General Motors Corporation like his father and rose to the position of vice president in charge of the company’s export division, and later general manager.

During his lifetime, Haskell’s great wealth allowed him to wear many hats: as a Master of Hounds, a clubman, a guiding figure of the National Horse Show, an amateur actor and a politician, having served as a delegate from New Jersey at the Republican national convention that was held in Philadelphia in June, 1948.

THE MOST MODERN AND INNOVATIVE RACETRACK

Haskell was responsible for making Monmouth Park one of the most modern and innovative racetracks in the country, and fashioned it after the most beautiful venues in England. From 1946 through his death 20 years later, Haskell made sure Monmouth offered its human and equine participants the finest in accommodations.

The clubhouse was completed in 1947 and featured three levels of parterre boxes, which were patterned after the Golden Horseshoe boxes at the Metropolitan Opera House. The parterres are regarded even today as a unique symbol of the track and are used to host celebrities, politicians, and dignitaries. Each box had its own overhead fan for relief on humid summer afternoons, as well as a dining table in the rear, a television monitor, cushioned chairs up front for viewing the races, and a service button on the wall to summon the waitress. Downstairs, a fully-equipped barbershop was located in the grandstand for both patrons and horsemen.

In 1948, five new barns were built, as well as a dormitory for horseme. In 1952, more land was purchased by the Monmouth Park Jockey Club for added parking space. The parking area was now so large that the track began a tram train service to transport patrons from the far reaches of the lot to the admission gates.

Monmouth was the first racetrack in the world to have hot running water in every barn, and Haskell instructed that each one be spaced 100 feet apart and that all stalls be fireproofed, to avoid a devastating stable fire. Each barn had toilets, showers, and living quarters, as well as fire boxes, and there were three fire patrol jeeps equipped with short-wave telephones, with a man on patrol between every two barns from dusk to dawn. Other innovations included an Olympic-sized swimming pool for the jockeys; air conditioning in the pressbox; a two-way intercom system for communication from the stewards to the patrol judges; the installation of a teletimer, which performed electrical timing of races; the display of a shoeboard, which gave fans information about the types of shoes worn by the horses (which was particularly helpful during periods of rain), and the broadcast of the first color television feed from a racetrack.

Twenty years after the first horses sprang from the gate at the new Monmouth Park, its guiding force, Amory L. Haskell, died of a heart attack in a New York City hospital on April 12, 1966, at the age of 72.

Upon learning of Haskell’s death, the tributes poured in from people in the sporting, political and social worlds.

“A distinguished citizen,” said N. J. Gov. Richard J. Hughes, “who has excelled in so many endeavors and whose contributions in many areas of public life will serve as a lasting and fitting tribute, and who was respected and admired by many.”

Haskell’s graciousness and hospitality were recalled when, in 1965, he played host to former President Dwight D. Eisenhower and Mrs. Eisenhower at Monmouth Park. His obituary in the Red Bank Register called it “perhaps his greatest hour at the track.”

In “The Register’s Opinion” editorial published April 14, 1966, the following was written about Haskell:

Amory L. Haskell – sportsman, political figure, multimillionaire, humanitarian. Mr. Haskell was truly a giant among men – and his achievements, his power, and his prestige made him one of the most influential men in the country, the state, and indeed, in many areas of the country.

(He) will be best remembered as the first and only president of the Monmouth Park Jockey Club. And it was largely through his efforts that the Oceanport racetrack became one of the finest in the nation … he always will have a special place in the history of Monmouth County. And his accomplishments will best tell his story today and in the years to come.”

Two years after his death, in 1968, the Monmouth Park directors honored his memory with the Amory L. Haskell Handicap, a race for older horses. Now called the Haskell Invitational, it is considered one of the top races of the year for sophomores, and many have used it en route to year-end honors.

This piece was excerpted from Linda Dougherty’s book, “The Golden Age of New Jersey Horse Racing.”