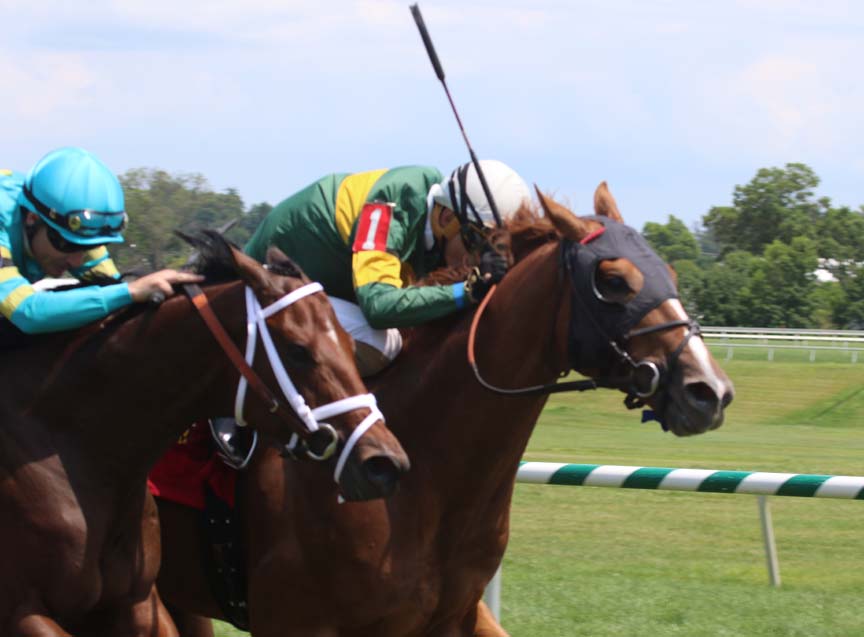 Just Howard (inside) held off Bonus Points to win the Caveat Stakes. Photo by Laurie Asseo.

Saturday’s $75,000 Caveat Stakes for Maryland-bred three-year-olds on the Laurel Park turf couldn’t help but stir up the memories.

Caveat, who won six of 21 starts and banked over $540,000 in 21 lifetime starts for Stephens, would later sire Maryland-bred Hall of Famer Awad, a multiple Grade I winner for trainer David Donk.

Just Howard has a long way to go before matching the accomplishments of the race’s namesake or his most prolific offspring in Awad, but Saturday afternoon his victory perhaps had far more sentimental value for owners Skeedattle Associates. Willie White, spokesman of the group and president of the Maryland Horse Breeders Association, purchased the son of English Channel out of the Alphabet Soup mare, Aruban Sandwich, for $37,000 as a yearling in 2015 and promptly named him in honor of Bender, who bred the colt.

“I have to give Larry Murray credit for pointing this horse out to me,” White said. “He told me he really liked the way this horse was bred for the grass and I thought we could get him for around $40,000. We named him Just Howard in honor of Howard Bender because he never liked being called Howie or Mr. Bender or Mr. B. He would always tell people, it’s just Howard. [Trainer] Graham [Motion] has liked him all along and now he’s really starting to mature into a nice horse.”

Just Howard had finished sixth in his career debut on the Laurel Park main track last fall then headed south with several members of Motion’s contingent and made two starts against maiden special weight foes on the grass at Gulfstream Park, finished second on Jan. 18 then fourth as the 6-5 choice on Feb. 26. He finished second as the 1-2 choice in a race taken off the first on April 7 at Laurel then was third as the 4-5 choice in a route race on the grass at Laurel on April 28 before attaining his diploma in a turf race at Pimlico on May 29 with Alex Cintron aboard and his first outing wearing blinkers.

On Saturday afternoon at Laurel, Just Howard bided his time through the early portion of the Caveat then battled with Bonus Points, hero of the Parx Derby on the main track two starts back for trainer Todd Pletcher, through the final furlong and the Motion trainee prevailed by a determined head under serious urging from Cintron for his first stakes tally and second straight victory overall after getting the distance in 1:40.87. Cintron noted that Motion has given him somewhat basic, straightforward instructions before his last two mounts aboard Just Howard.

“He just told me to win,” Cintron said jokingly. “I’ve talked to Graham a few times about this horse and he basically just told me to let him settle and keep him out of trouble and he could do the rest. He was relaxed early and then I moved when the 3-horse [Bonus Points] moved. [Jockey Fergal] Lynch had me pinned inside a little bit on the far turn but I found some room and we just kept fighting the whole way. Every time I asked him he responded. It was really close all the way to the wire, but my horse kept fighting and he got there at the end.”

White said he expected to see Just Howard back on the grass next month at Laurel Park on Maryland Pride Day, one of the early preps for the Maryland Million card here on October 21, but he would leave that decision in the hands of Motion. White could not recall seeing Caveat win the Belmont Stakes more than 30 years ago, the second of five straight Belmont winners for Stephens, but he admitted he intended to savor the English Channel colt’s first stakes victory on a day when he could reminisce about his namesake.

“It had been a while since we won a race here,” White joked. “I had to use my GPS just to find the winner’s circle. I think he’ll be back here on Maryland Pride Day. I like where the Maryland breeding industry is headed. I think we’re doing a lot of great things. I always enjoy working with Tom Bowman [former MHBA President and current Maryland Racing Commission member]. He did a lot of good things for Maryland breeding as our president and he is still very, very helpful to the industry. We started buying horses around 1991, so Caveat was a little before my time. But I’m glad we won this race named for him.”

Several races later in the $75,000 Pearl Necklace Stakes for Maryland-bred three-year-old fillies at one-mile and one-sixteenth on the turf, I’m Betty G (Horacio Karamanos) also recorded the first stakes victory of her career in similar fashion when she outfought Riley’s Choice (Lynch) in the final 100 yards to prevail by a nose in 1:40.25. A three-year-old daughter of Into Mischief out of the Honour and Glory mare Lady In Ermine, I’m Betty G also notched her second straight score after garnering her diploma against maiden $30,000 claimers at Indiana Downs in her first outing for trainer Michael Maker after running fifth, eighth and seventh at Aqueduct in three tries for former trainer Todd Pletcher.

“I’m absolutely thrilled with her,” said breeder Carol Kaye. “That was nice to see. She had been running up in New York and it’s tough racing up there. As breeders we really wanted her here and to see her show up today was really exciting. We would have been happy with a piece of it, but we were glad that she won.”

While Caveat is known for winning the Belmont Stakes at age three, Pearl Necklace actually enjoyed her best season at age five, winning a quartet of stakes including the Grade I Diana in New York and the Geisha at Pimlico. The Maryland-bred daughter of Ambernash won 21 of 48 starts and earned nearly $740,000 for trainer Roger Laurin and owner-breeder Reginald Webster from 1974-79, well before the advent of the Breeders Cup races and other stakes today bolstered by slots revenue.