DelCap undercard: A star is ‘mourne 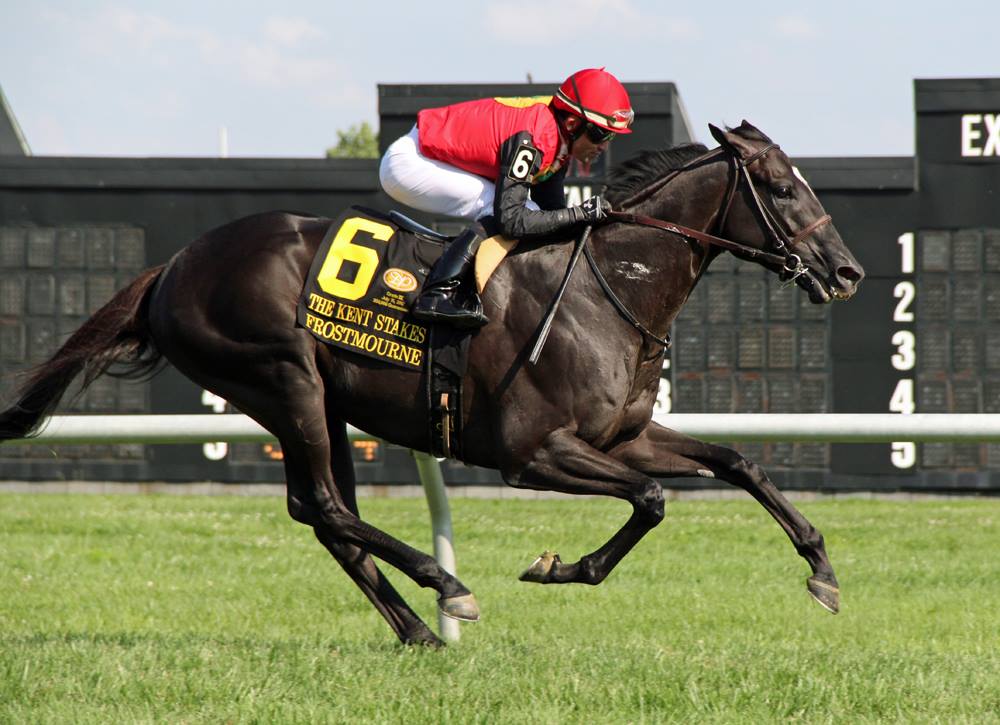 Frostmourne romped in the G3 Kent Stakes. Photo by The Racing Biz.

Frostmourne stamped himself an up-and-comer when he made a quick move to win the Grade 2 Penn Mile at Penn National in early June.

Today at Delaware Park, in the Grade 3 Kent Stakes, he may well have arrived.

Under jockey Joel Rosario, Frostmourne, a Speightstown colt trained by Christophe Clement, bided his time behind The Tortoise for three-quarters of a mile before running past that rival and drawing off to a six-length win in 1:49.95 for 1 1/8 miles over a turf course rated good.

“I just took my time with him,” said Rosario. “He really put a very nice run in.”

It was the second graded stakes win for the three-year-old and gave him more than $537,000 in earnings.

There was plenty of early pace in Saturday’s $50,000 Carl Hanford Memorial Stakes at Delaware Park, one of three added-money events supporting the Delaware Handicap.

The most immediate beneficiary in the 1 1/16 mile test was No Distortion, who rallied from fifth under Edwin Gonzalez to post a dominant 2 1/2 length win in 1:43.90. Late-running Sea Raven ran into the exacta, while favored Adirondack King had to settle for fourth.

No Distortion is trained by Larry Jones for the horse’s breeder-owner, Brereton Jones. It was his second stakes win and fourth victory overall from 17 starts.

Under Edwin Gonzalez, who won two stakes and finished third in the DelCap, Struth was in action early, and he and Always Sunshine, a Grade 3 winner, fought it out heads apart for the first five furlongs before Struth wore his rival down. It was almost seven lengths farther back to Eighty Three.

“Thrilled,” said Magee, who conditions the Curlin gelding for owner Mark Sitlinger. “He got in trouble last time, had a rough trip – everything went wrong, and he got beat only a couple lengths.”