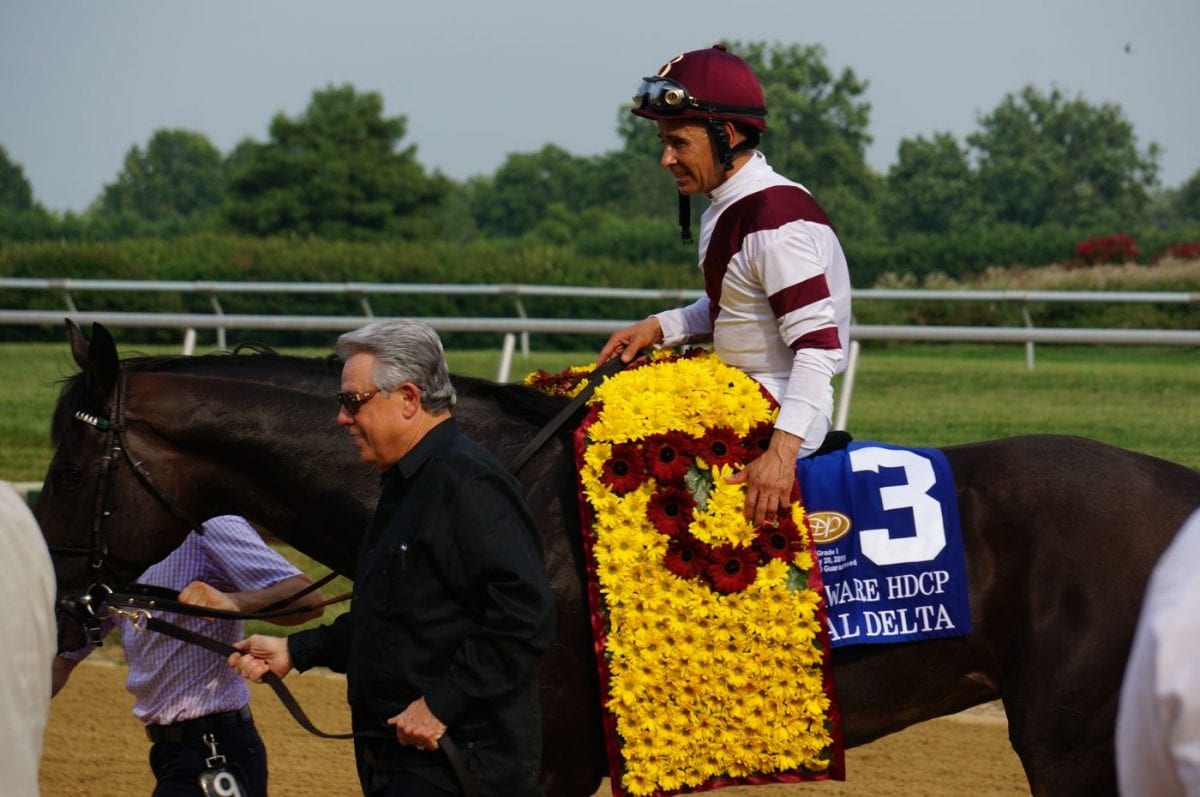 Champ Royal Delta enters the winner’s circle after the 2013 DelCap. Photo by Vas.

Saturday will mark the 80th running of the Delaware Handicap, an American racing fixture that has stood the test of time to remain one of the top filly and mare races in the country.

While the race is no longer alone on the racing calendar, NYRA’s Grade I Personal Ensign now carrying a $700,000 purse and being contested at the more typical distance of 1 1/8 miles, this year the DelCap will once again be in the national spotlight as the race will feature the top distaff runner in racing.

Songbird, owned by the Fox Hill Farm of Delaware local Rick Porter, will be odds-on to win the 13th race of her 14-race career when she faces five rivals in the $750,000 Grade I headliner going 1 ¼ miles.

Having a superstar like Songbird race at Delaware Park harkens us to the 1970s, perhaps a golden age for for the track and its signature race – and, for that matter, for all of racing. Top-flight stables from trainers like Doug Davis and Henry S. Clark, were joined by Maryland powers Richard Dutrow, Bud Delp, King T. Leatherbury and Ron Alfano. The rider’s colony during that time included such outstanding reinsmen as Chris McCarron, George Cusimano, Vince Bracciale Jr., Bill Passmore and Ben Feliciano, Hector Pilar and others.

During that extraordinary period, Hall of Famer Susan’s Girl won the DelCap twice (1973,1975), one of three runners to win the big event two times. She was joined by the great Christiana star Obeah, who won in 1969 and again in 1970, and 1971-72 winner Blessing Angelica. Other winners during that decade included Optimistic Gal (1976) and Late Bloomer (1978).

No single race illustrates the vibrancy of Delaware Park and the prominence of the DelCap during that era better than the 1977 edition.

Sharp and trainer Charlie Peoples, another Mid-Atlantic product, had pointed Mississippi Mud for the DelCap since early in the season, and to each a win in the DelCap would be like a dream come true.

But standing in the way of Mississippi Mud was Calumet Farm’s brilliant Our Mims. Trained by John Veitch, Our Mims, a half-sister to the great Alydar, had won the Fantasy Stakes at Oaklawn Park in the spring and came up to the DelCap with a seasonal resume that included wins in the Grade 1 Coaching Club American Oaks and Grade 1 Alabama, contested at Belmont Park and Saratoga, respectively.

It would be a classic match-up: The regally bred 3-year-old invader versus the older star of the home team. Racing got a good bit more coverage in the print media and the New York sports pages were full of stories about the upcoming race. In those days race trains that originated at Penn Station would bring racegoers right to the end of the grandstand at Delaware Park and sales for the race trains for DelCap day were brisk.

The weather for the big day was clear and hot, and a crowd of more than 12,997 packed the stands. The throng was so large people were standing in the aisles, along the back walls and just about any place where they could get a view of the race track.

They came looking for a great race. What they got was an American racing epic.

Jorge Tejeira rode Mississippi Mud that day, while future Hall of Famer Jorge Velasquez Jr. was aboard Our Mims. Mississippi Mud possessed more natural speed, and she held the early lead, but Velasquez moved Our Mims up to join her in the second turn. When the fans saw the two stars hook up the noise rose to a fever pitch. The battle was on.

They turned into the stretch as one, Mississippi Mud on the inside and Our Mims on the outside. Tejeira worked feverishly on his mount while Velasquez called for more from Our Mims with his rhythmic riding style. They came roaring down the stretch, head and head, neither horse giving an inch.

They hit the wire like one, both necks stretched out, the hands on the reins of both riders fully extended along their mounts’ neck and withers.

As the two horses galloped out following the finish, the crowd worked hard to catch its breath, a single question on every mind.

Up on the roof the placing judges had immediately called for a photo, and photo finish technician George Ryall quickly developed a print which he delivered to the officials. Down below the tote board was blank as thousands waited for the numbers to go up. After a few minutes the placing judges called for a second print as throng milled about, arguing amongst themselves as to who had won the race.

Soon the placing judges ordered Ryall to develop a third  print of the finish and finally, some 11 minutes after they had crossed the wire, the numbers were posted. Our Mims had won the 1977 Delaware Handicap by the slimmest margin possible.

It was a heartbreaking loss for Sharp, Peoples and Mississippi Mud’s many fans in the Delaware Valley. Our Mims went on to earn the Eclipse Award as the nation’s top 3-year-old filly. She raced just once more, winning an allowance race in 1978.

Mississippi Mud’s legacy grew far beyond her racing career. As a broodmare she produced Dixieland Band, a multiple-graded stakes winner during his racing career who turned out to be an influential sire, his line continuing to this day. His grandson Union Rags – by Dixieland Band’s son Dixie Union – is one of racing’s most popular sires today.

When Songbird parades to the post on Saturday, those lucky enough to be in attendance will one day be able to say they got to see a champion up close and personal.

That’s what the Delaware Handicap has done since 1937: it’s brought racing’s best fillies and mares to the fans of the Mid-Atlantic for some of its greatest battles.