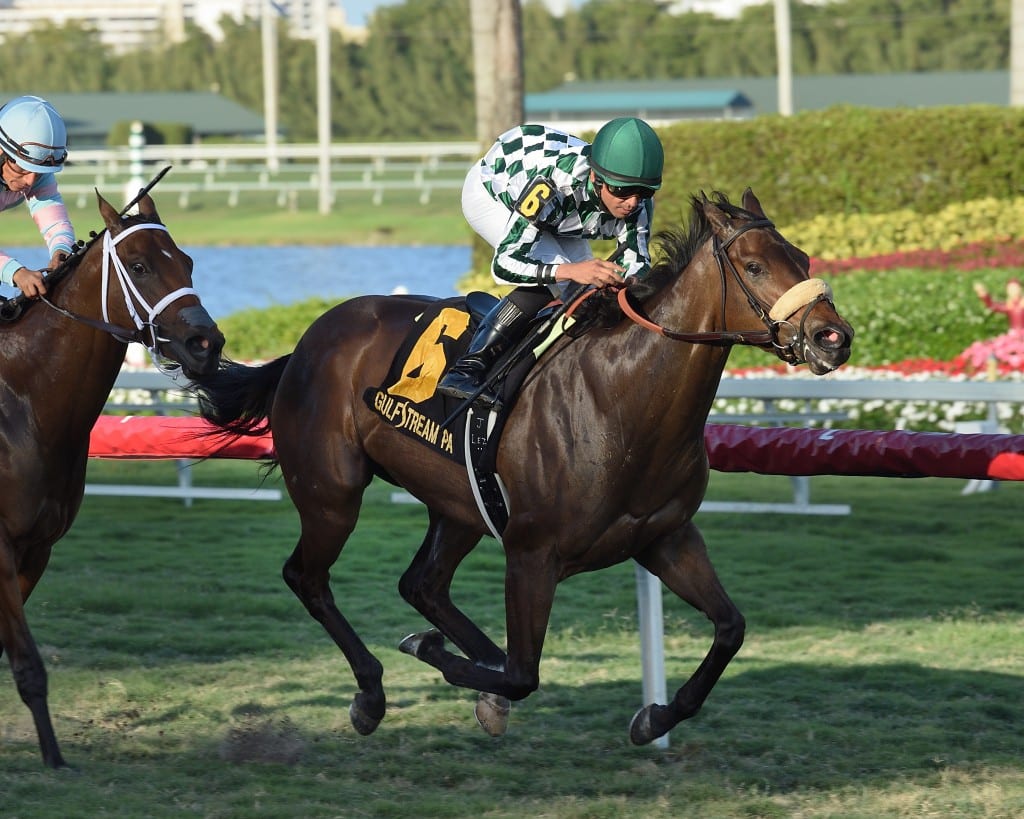 One of Morticia’s two stakes wins came in the Melody of Colors at Gulfstream Park. Photo by Lauren King.

G. Watts Humphrey Jr.’s speedy homebred filly Morticia, small in size but big on talent, kicks off the second half of a sophomore season that has already produced a pair of stakes victories in Saturday’s $100,000 Stormy Blues at Laurel Park.

The 10th running of the 5 ½-furlong Stormy Blues for 3-year-old fillies is the richest event on Laurel’s summer stakes calendar and one of three worth $250,000 in purses to be run over its world-class turf course Saturday as part of an 11-race program that begins at 1:10 p.m.

Morticia, a bay daughter of Twirling Candy co-owned by Kentucky-based trainer Rusty Arnold, has not run since her gutsy nose victory over Lull in the seven-furlong Soaring Softly May 20 at Belmont Park. She is one of four stakes winners in the Stormy Blues.

It marked the third win from four starts since being moved to the grass for her sophomore campaign and second in a stakes, following the five-furlong Melody of Colors Feb. 25 at Gulfstream Park.

In between, Morticia overcame an awkward start to contest the pace and hang on for second in the one-mile Appalachian (G3) April 13 at Keeneland, 3 ¼ lengths behind La Colonel. Finishing behind her that day were New Money Honey and Coasted, who ran 1-2 in the Breeders’ Cup Juvenile Fillies Turf (G1) last fall, a race where Lull finished fourth.

“She’s doing well. She’s had a couple months off. It’ll be almost two months, for no reason. It’s just the way it worked,” Arnold said. “I was going to go back to New York for a race and it was rained off the turf and this one just popped up on the radar.

“We got her started on the dirt and she didn’t show too much and once we got her to the turf, she showed quite a bit,” he added. “She’s only been beaten one time on the turf and she’s beaten some nice horses, so obviously once she got to the turf she’s had great form.”

Despite being her only defeat on the grass, Arnold was particularly proud of Morticia’s effort in the Appalachian. She pressed long-shot leader Like a Hurricane for six furlongs and though no match for the winner, held on to second by a head over Proctor’s Ledge at 34-1.

“I think in the Appalachian she showed as much heart as any of her races. In all honesty she probably doesn’t want to go that far, it was her first time around two turns and first time against really, really top company,” Arnold said. “She hooked probably the best 3-year-old filly on the turf in the United States in [New Money Honey]. La Coronel, she went by us but she showed a lot of guts to hang in there for second. Then she came back at Belmont and showed a lot of guts to hold off [Lull], who I think is a very good filly also.”

Morticia will carry co-topweight of 122 pounds including jockey Jose Lezcano from Post 2 of nine over the Kelso Turf Course layout, where she is expected to flash the early foot that has earmarked her previous races.

The other multiple stakes winner in the Stormy Blues is St. Elias Stable’s Bode’s Dream, though both her victories came on dirt last year for previous trainer Todd Pletcher. Winless in three tries this year, including a troubled trip in the Adena Springs Miss Preakness (G3) May 19 at historic Pimlico Race Course last out, she will be making her first start for trainer Anthony Margotta, Jr.

Bode’s Dream won the first three starts of her career last year, all in front-running fashion. She broke her maiden at Gulfstream in May and won the Astoria at Belmont in June, but didn’t run again until taking the House Party in mid-December also at Gulfstream. Beaten a neck as the favorite in the Old Hat Jan. 7, she finished last in each of her last two races against graded company including the Forward Gal (G2) Feb. 4.

Both Smiling Causeway and Sylphide are set to make their stakes debuts in the Stormy Blues. Audley Farm Stable’s Smiling Causeway has raced just twice previously, beaten a head in her debut on dirt May 29 at Pimlico before going gate-to-wire to win by 3 ¼ lengths in a June 23 maiden special weight at Laurel over the same course and distance she’ll try Saturday.

“It’s one of the last straight 3-year-old stakes on the turf so I think it’s worth trying,” Fair Hill-based trainer Arnaud Delacour said. “I like the filly. She might lack a little bit of experience to run in a field like that but she’s doing very well, so we’re taking a shot.”

Panic Stable’s Sylphide enters the Stormy Blues off back-to-back wins, breaking her maiden by three lengths May 28 at Pimlico and pulling clear after being tested early for a two-length allowance score June 26 at Parx – both victories coming over older horses.

“She is in very good form right now. She’s improved. She just needed to mature a little bit,” trainer Jane Cibelli said. “The first race she ran she ran very well but she got knocked around a little bit and I don’t know if that knocked the confidence out of her, but the next time she ran she didn’t really finish that well so we kind of took a step back. She had another bad experience in her next race but she did finally start to come around.

“I’ve always really liked this filly. I’ve thought she’s got a ton of talent but she was a little fragile-minded, I guess. But she’s getting there,” she added. “It’s going to be a test. Morticia is very, very tough. She’s been running against some very nice horses and she’s going to be tough to beat, but you’ve got to find out. [Sylphide] is an improving filly. She has to improve a little bit, of course, to beat these but we’ll see. We have to ask the question.”

Also entered are Fair Hill-based horses R Naja, winner of the six-furlong Star Shoot over Woodbine’s synthetic surface April 16 for trainer Michael Stidham; Glen Hill Farm’s Deer Valley, who rallied for a half-length victory in the five-furlong Crank It Up June 10 on the turf at Monmouth Park; Hailey’s Flip, trying turf for the first time off an entry-level optional claiming allowance win May 5; and both Defy and White Gold from owner PTK, LLC and trainer Jason McCutchen.