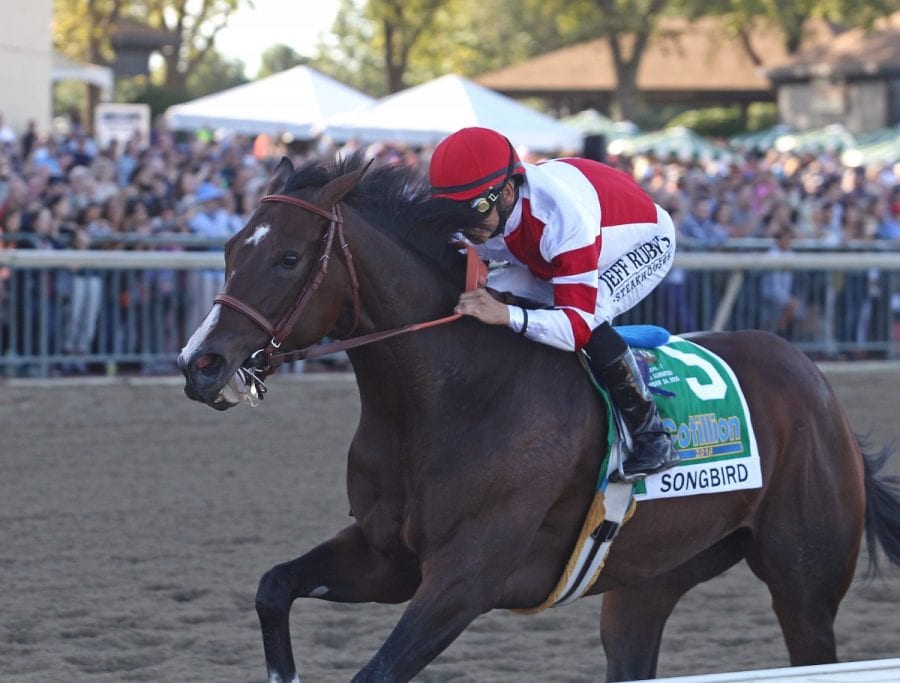 Two-time champion filly Songbird, locally-owned by Richard Porter’s Fox Hill Farm, headlines the 80th renewal of the $750,000 Grade I Delaware Handicap at Delaware Park this Saturday. After being defeated in 2001 and again in 2011, Porter will be seeking his first victory in the biggest race of the year in the state he calls home. The mile-and-a-quarter filly and mare summer classic has attracted a field of six.

Songbird has been tabbed as the overwhelming morning line favorite, with odds of 1-5.

In her only outing this year, Songbird posted a length victory in the mile and a sixteenth $750,000 Grade I Ogden Phipps at Belmont Park on June 10. Last year, the 4-year-old daughter of Medaglia d’Oro reeled off seven consecutive wins; including Grade I victories in the Santa Anita Oaks, Coaching Club Oaks & Alabama Stakes at Saratoga, and the Cotillion from Parx; before suffering her first career defeat by a nose against Beholder in the Breeder’s Cup Distaff at Santa Anita. The Kentucky-bred trained by Hall of Fame trainer Jerry Hollendorfer has a career record of 12 wins and a second from 13 starts with earnings of $4,112,000.

“I have run at Delaware before in a few races and I have been real fortunate in that most my horses have gotten over the racetrack,” trainer Jerry Hollendorfer said. “Songbird is training really well right now and we are hopeful she can come in there and have a good start.”

Porter came closest to winning the Delaware Handicap with Havre de Grace, but was thwarted by Blind Luck and Jerry Hollendorfer in 2011. His only other starter in the race, Jostle, finished fourth in 2001.

Before the 2011 race, Porter described how much winning the Delaware Handicap meant to him and where it ranked in races he wanted to win the most.

“It is certainly high on the list and right up there with some of the most prestigious races in the country,” Porter said in 2011. “Obviously, being from Delaware and being the biggest race in Delaware, it is high, very high, on my list.”