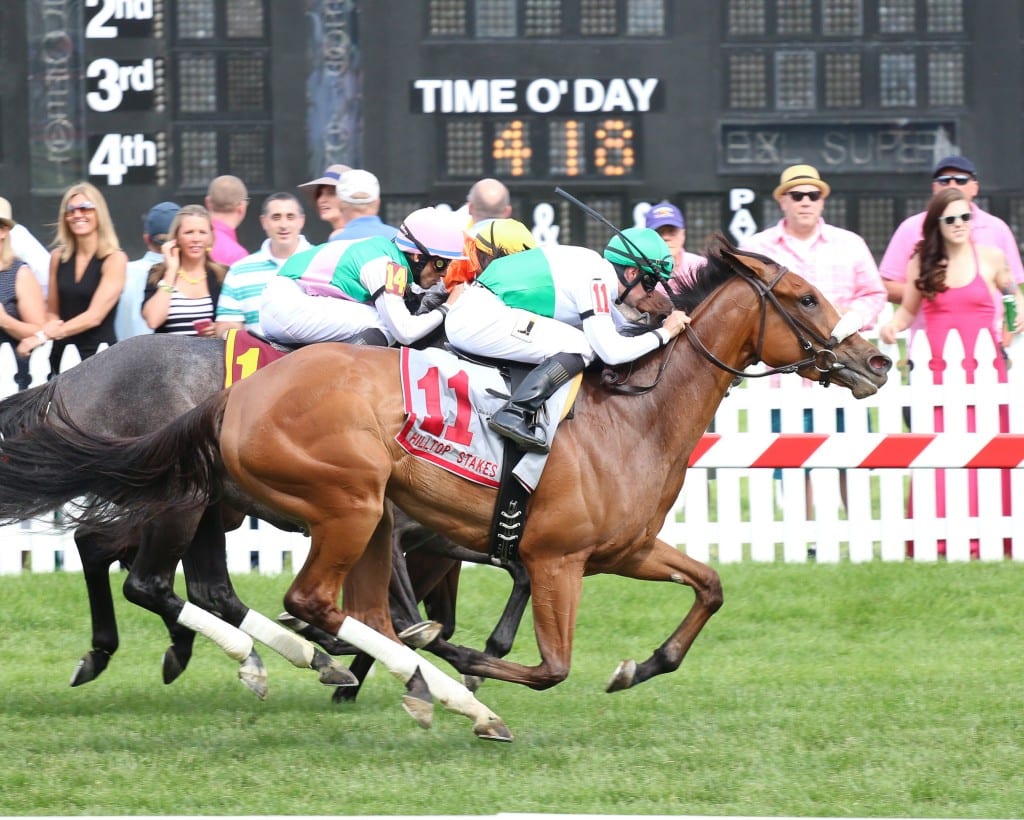 Gone Away , here winning the 2016 Hilltop Stakes, is 8-1 on the morning line for the Grade 3 Robert G. Dick Memorial Stakes Saturday at Delaware Park. Photo by George Adams.

Empyrean Stable’s Zipessa will be seeking her first victory of season in the $200,000 Grade III Robert G. Dick Memorial Stakes at Delaware Park this Saturday. The mile and three-eighths affair for fillies and mares has attracted a field of nine.

Zipessa, the 2-1 morning line favorite, has a career record of four wins, a second and three thirds from twelve starts with earnings of $$428,250. In her most recent outing, the Kentucky-bred trained by Michael Stidham finished third in the $100,000 Grade III Eatontown Stakes at Monmouth Park on June 3.

Previously, the daughter of City Zip finished unplaced in the Grade II Sheepshead Bay at Belmont Park on May 6. Last year, she posted a record of two wins, a second, and two thirds from seven starts with earnings of $354,400. She finished third in the Grade I Beverly D at Arlington, second in the Grade I Rodeo Drive at Santa Anita and fifth in the Grade Breeders’ Cup Filly and Mare Turf.

Guilty Twelve has a career record of three wins and two seconds from nine starts with earnings of $143,806. In her only outing this season, the 5-year-old daughter of Giant’s Causeway posted a nose victory in a mile and a quarter allowance at Belmont Park on May 19. Last year, the Kentucky-bred had a record of two wins and a second from five starts.

“She has been very competitive,” said trainer H. Graham Motion. “She came back and won a two other than in first race back after having the winter off. We have had this race in mind. She is a really well bred filly and it would be nice to get her some black type. But more importantly, the timing is very good for her and this race is a good fit for her.”

Happyness has a career record of three wins, a second and a third from six starts with earnings of $118,607. The 5-year-old daughter of Verglas broke her maiden in France in 2015. Last year, the Great Britain-bred won an allowance at Aqueduct and Belmont Park.

“This is the first time, she will be running for me,” said trainer H. Graham Motion. “She has been doing well and the timing of this race is great for her. We like the way she has been progressing and we are excited to get her to the track.”

“It is neat,” Motion said. “It is obviously a race that tends to fit us very well. We tend to have fillies and mares that want to go this far, so it is not necessarily a coincidence that we have done well. This is a race that I always have in the back of my mind, when one of those fillies or mares come along.”

In the day’s other turf stake, the $50,000 Cape Henlopen for three-year-olds and up going 1 1/2 miles, graded victor Renown, trained by Elizabeth Voss, gets the nod as the 3-1 morning line favorite. Renown is coupled with Mr. Singh and will have Angel Cruz in the irons.