Ground-up approach has Jomar Torres on the rise 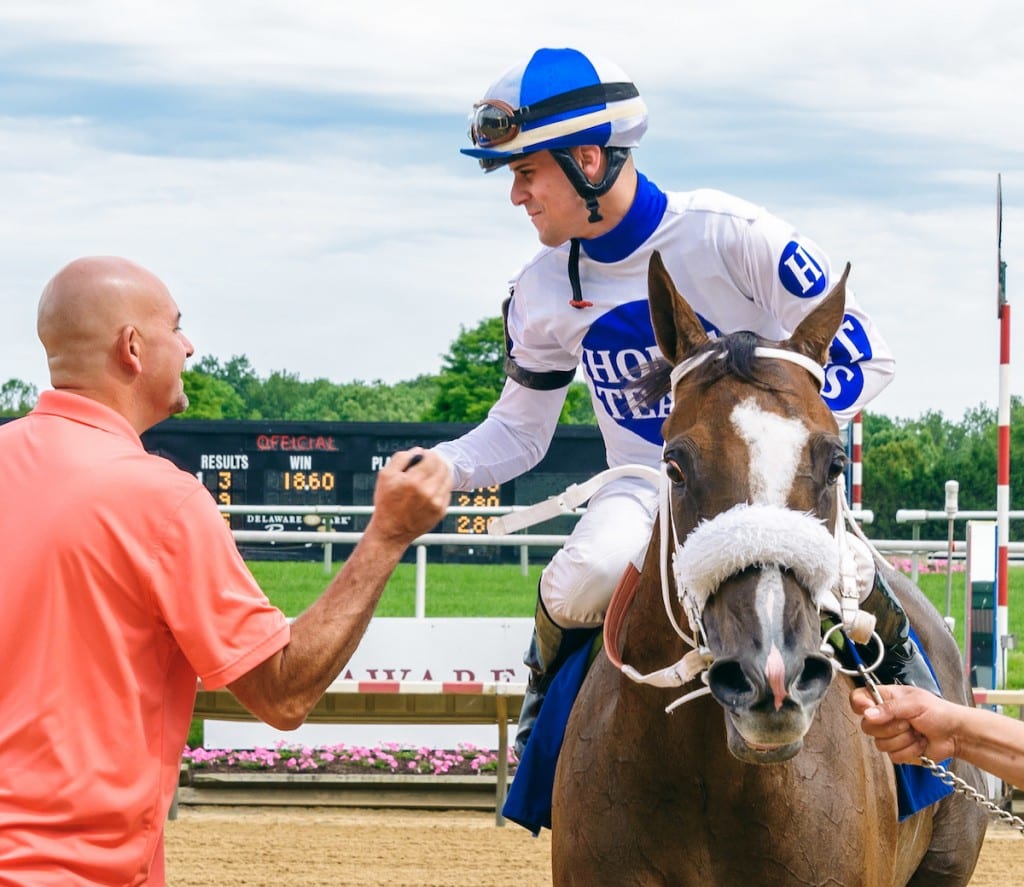 Learning the business from the ground up.

It’s a popular phrase and one that’s often used in racing to describe how youngsters learn the basics of a business and sport where it seems there’s something new to discover every day.

But jockey Jomar “Joe” Torres, a 22-year-old from Puerto Rico who has been one of the hottest riders in the Mid-Atlantic region this year, actually physically began learning about horses from the ground up.

In his home town, horses play an important part in everyday life. Horses are used for transportation, for moving goods, for agricultural purposes and other chores, and as a youngster Torres and his father would pick up discarded horse shoes, rework them, and use them to reshod horses on the streets. It was a tough way to make a living.

When he was 16, Torres heard of a school where he could learn to be a farrier and enrolled in that school. The young rider picked up the story from that point with help from his agent, Tom Stift.

“While I was learning to shoe horses one of the instructors asked me if I had any experience riding race horses,” Torres recalled. “I told him no, so when I wasn’t in school he put me on some horses and taught me the basics of how to stay balanced, hold the reins and other tips. It didn’t take me long to know I wanted to learn to ride thoroughbreds and be a jockey.”

So Torres switched gears, moving from farrier school to the Puerto Rican riding academy, where he impressed his teachers right from the start. He showed so much promise during his time at the academy that when an international competition featuring the world’s top apprentices was held in Dubai, Torres was selected to represent Puerto Rico. The young apprentice won that competition and in the process caught the attention of agents and trainers in the U.S. He came to the U.S. last year and rode at the NYRA tracks, as well as Parx, during the first eight months of this apprenticeship, with mixed results.

It was this January when Torres’ fortunes changed. Stift picked up the story at this point.

“Claudio Gonzalez, a trainer I ride quite a few horses for and someone who’s very good at spotting talent in riders, called me one day and said, ‘I just watched a kid ride a horse and you’ve got to get this rider,’ Stift recalled. “I watched the replay of the race and was impressed as well but one of my friends was the kid’s agent at the time and I told Claudio I couldn’t undercut him. Then a couple of days later, the agent called me and said he was making some changes and would I consider taking Torres’ book. I couldn’t believe things happened the way they did but it sure worked out well.”

Since Stift (who also has Victor Carrasco) took over Torres’ engagements, the rider has been on fire. He finished the Laurel winter meeting with 25 wins, leading all apprentices, then won six races during Pimlico’s short meeting to tie for second in the standings.

Despite losing his “bug” two months ago, Torres has continued on a roll and was leading the standings at Delaware Park when he had to sit out a week due to a suspension. He currently ranks third in the standings with six winners. This season he’s already won 52 races after winning just 20 last year.

And according to Stift, Torres has a work ethic very similar to Carrasco’s, “His wife was expecting their second baby not long ago and he called me and asked me if it was o.k. to not come out the next morning to work horses because his wife was due any time,” the agent said with a chuckle, “And Victor, who is like an older brother to the kid, told me he’d get on the kid’s workers for a couple of days so Joe could spent time with his wife and new baby.”

That baby was daughter Ailany, who is three weeks old now and older brother Jayden is a year and a half. Stift said he’s lucky to have not one but two young men who are not only top riders but hard working role models for any young person aspiring to be a rider.

“Claudio (Gonzalez) loves him and guys like Keith Nations, Mike Gorham and Scott Lake are all impressed with his work on their horses,” Stift concluded, “I know one thing, I’m sure glad Joe decided riding horses was more fun than putting shoes on them.”