Waterhaven (#6) won but was disqualified at Laurel on June 11. Photo by The Racing Biz.

Our new Laurel Park racing notebook gives you the scoop on the weekend’s racing, even if you couldn’t make it out. Horses to watch, headlines from the weekend, leading jocks and trainers — it’s all here.

Check it out below. 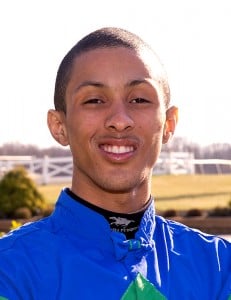 Victor Carrasco has surged to a two-race lead in the jockey standings in the first two Laurel Park weekends, with Horacio Karamanos in second after a three-win day on Sunday, punctuated by his 2,000th career victory.

Only three of the top 10 jockeys by wins — Carrasco, Jevian Toledo, and Sheldon Russell — have been generating bettors a postive return on investment. Of those, Russell, whose average winner at Laurel Park has paid $30.20, has been by far the most profitable, paying back $3.90 for each two-dollar wager.

Among trainers, Kieron Magee has been fastest out of the gate, winning with six of his first 15 starters — a 40 percent strike rate. Of trainers with at least two wins, Phil Schoenthal, whose two wins have returned an average win payoff of $30.30, leads the group in  return on investment.

In fact, Mary Eppler is the only trainer with at least two wins so far during the meet who has not generated a postive return on wagering investment.

Linda Rice, who won the Laurel winter meet while winning over 50 percent of her starts, has one win from five starts to date during the summer meet.