Power of Snunner looks to rediscover early zip in Obeah 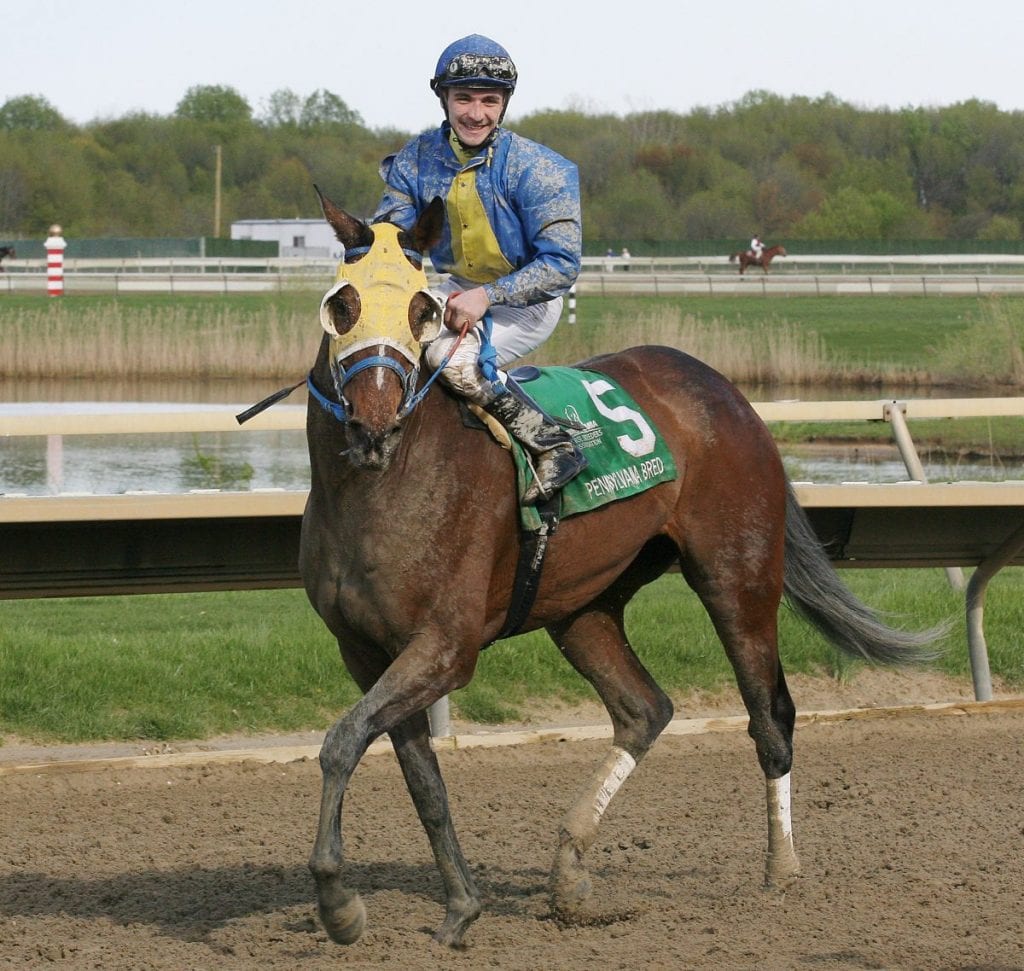 Jockey Matt Rispoli was all smiles after winning the Foxy J. G. aboard Power of Snunner. Photo by Barbara Weidl / Equi-Photo.

Normally horseplayers and horsemen would think long and hard about the chances of a horse entered in a $100,000 stake race that hadn’t won a race in two years.

But there’s just such a horse entered in Saturday’s $100,000 Obeah Stakes at Delaware Park, and it would be a serious mistake to take Power of Snunner lightly in Saturday’s nine-furlong headliner, which also serves as a prep for next month’s Grade 1 Delaware Handicap.

Power of Snunner is back in trainer Tim Kreiser’s stable after a winter racing for trainer Joe Sharp, and Kreiser says that while his prize mare’s running style may have changed a little bit, he expects the same dead game and consistent Power of Snunner to show up when they load in the gate Saturday.

Bred in Pennsylvania by her owner, James Courtney, Power of Snunner won seven of her first 23 starts and also finished second in 12 of those races, giving her a stellar mark of 19 finishes in the exacta in 23 races.

She came up with some tendon issues in the summer of 2015, and her connections gave her ample time to recover and return to the races. Following a runner-up effort in the August 2015 Lady’s Seccret at Monmouth Park, she didn’t race again until December 31, 2016.

Kreiser oversaw Power of Snunner’s rehab, and when the mare left his barn in late fall of last year her trainer felt his star was fully recovered and ready to do battle again.

“We took our time with her, and she’s such a pro it was a pleasure to watch her get back into the swing of things,” Kreiser recalled. “When she left here to head south, she was ready to go racing again.”

Power of Snunner made five starts while in Sharp’s barn, and while she failed to hit the winner’s circle, she certainly didn’t race poorly, with three seconds and a pair of fourths. In two of those races, including the Grade 3 Allaire Dupont Distaff on Preakness eve at Pimlico, she ran into Terra Promessa, one of the top race mares in the country. In that race Terra Promessa smoked her field by more than seven lengths, and Power of Snunner wound up fourth after racing well off the pace to the stretch.

While Kreiser says his mare has been doing well since she returned to his barn three weeks ago, he is somewhat puzzled as to Power of Snunner’s lack of early speed in her races this winter.

“She’s always naturally had a high cruising speed and in the past she’s been close to or on the lead in most of her two turn races,” the horseman pointed out. “I’m not quite sure why she’s been lagging back off the pace in her races this winter, but she’s been training smartly since she’s been back and I’m hoping she’ll be closer to the pace early on Saturday.”

The multiple stakes winner and earner of $417,560 makes her 29th start in the Obeah, and a strong showing in the nine-furlong race could well earn her a berth in the Grade I Delaware Handicap on July 15.

The mare is part of one of the most interesting and successful families in the history of Pennsylvania racing. Power of Snunner’s mother, the Yarrow Brae mare Snunner, is a full sister to Winning Grace, the dam of Page McKenney. Page McKenney, of course, is the erstwhile $16,000 claimer who now has racked up nearly $1.6 million in earnings. While Mr. Courtney has sold the mare who produced those two broodmares it’s still one of the most fascinating bloodlines tales in the business.