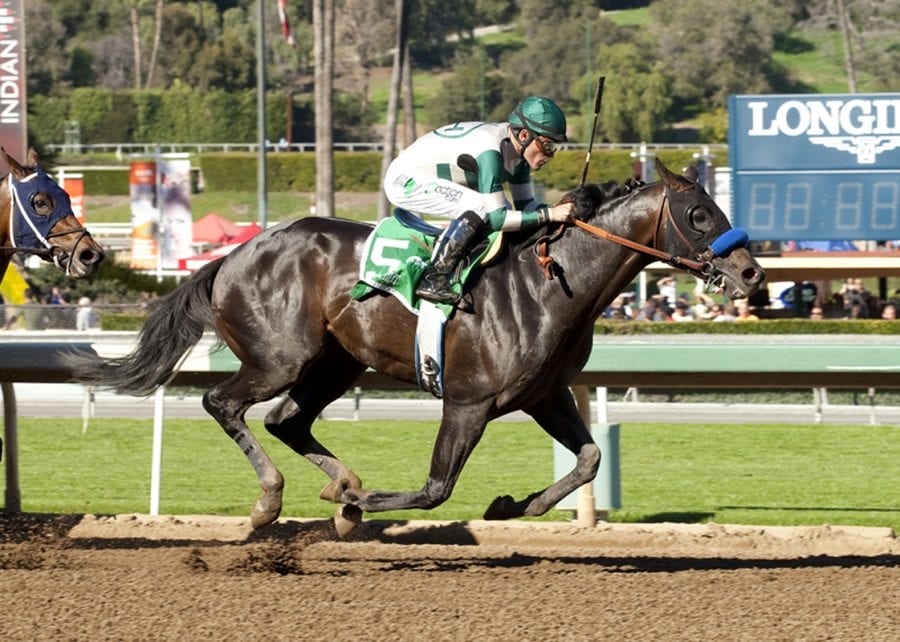 The 124th running of the Met Mile for 3-year-olds and up is one of nine graded stakes and the second-richest on a 13-race program highlighted by the 149th renewal of the Grade 1, $1.5 million Belmont Stakes presented by NYRA Bets.

The Met Mile is also a “Win and You’re In” qualifying race for the Grade 1 Breeders’ Cup Dirt Mile November 3 at Del Mar, and is the second leg of a $1.5 million guaranteed all-Grade 1 Pick 4 that also includes the $700,000 Just a Game in Race 8 and $1 million Woodford Reserve Manhattan in Race 9, and is anchored by the Belmont.

Though Bob Baffert is confident Mor Spirit can handle the distance and the company, the Hall of Fame trainer is concerned about the one-turn configuration of mile races at Belmont Park. His other one-turn races came in his fall 2015 unveiling and the Grade 1, seven-furlong Malibu last December – his first race since running 10th in the 2016 Kentucky Derby.

Last June, the Baffert-trained Cupid finished last of five as the favorite in the 1 1/16-mile Easy Goer on the Belmont Stakes undercard, a race also contested around one turn.

Mor Spirit enters the Met Mile on a two-race win streak, most recently a front-running 5 ¾-length triumph in the Grade 3 Steve Sexton Mile May 7 at Lone Star Park. He won the Grade 1 Los Alamitos Futurity and Grade 3 Bob Lewis while on the Triple Crown trail last winter.

“He’s got to run his last race back,” Baffert said. “He went off form a little bit. The Derby was a bad race for him. We freshened him up and now he’s doing really well. This has been the plan. It’s an important race. It’s a stallion-maker.”

Expected to give Mor Spirit company on the front end is Ivan Rodriguez’s Sharp Azteca, making his first start since finishing third by a length in the Group 2 Godolphin Mile March 25 at Meydan. He will have a new rider for the Met Mile in Paco Lopez, breaking from post 5.

Trainer Jorge Navarro gave Sharp Azteca plenty of time to recover from his trip to the Middle East. The 4-year-old son of Freud has finished in the money in nine of 11 career starts with five wins, four coming in five tries at the distance, including the Grade 2 Gulfstream Park Handicap February 11 and the Grade 3 Pat Day Mile last May.

“Sharp Azteca came out of the race in Dubai in great condition. We gave him some time and he recouped really fast,” Navarro said. “He’s had four workouts here at Monmouth Park and he’s worked super. He’s doing great for the race.

“I don’t want to brag but the horse up to right now is doing good,” he added. “A lot of people when they go to Dubai they always say that they’re not the same. The horse is doing the same as always. I haven’t seen anything different from him. He’s training really good. We’ll see how good on Saturday.”

Shadwell Stable’s multiple Grade 2 winner Mohaymen (20-1) enters the Met Mile looking to return to the form that had him as one of the leading Triple Crown contenders last spring. He returned from an 8 ½-month break between races to run fourth in the Grade 3, one-mile Westchester May 6 at Belmont.

Mohaymen, to be ridden for the first time by Jose Ortiz from post 6, is trained by Kiaran McLaughlin, whose Frosted won last year’s Met Mile by 14 ¼ lengths in 1:32.73 – both records. McLaughlin also won in 2008 with Divine Park.

“We hope that he was just rusty and needed his last race, but he looks fabulous and he’s so happy and doing great,” McLaughlin said. “If he runs his ‘A’ race he belongs with these horses. Obviously, his last race or two weren’t great so we’re hoping he gets back on an ‘A’ race cycle. I’d love to have another Frosted race. You never know.”

Rally Cry (5-1) will break from post 2 with Hall of Famer John Velazquez, while Luis Saez has the call from post 11 aboard Tommy Macho (10-1).

“Historically the Met Mile is a terrific race, it’s a difficult one to win and it’s one that the breeders hold in high regard, so anytime you can compete with the best horses going a mile it’s usually a sign of a lot of quality,” Pletcher said. “Hopefully these horses can step up into that league.”

GMB Racing’s Tom’s Ready (15-1), like the favorite a Pennsylvania-bred, returns to Belmont for the Met Mile one year after his 7-1 upset of the Grade 2 Woody Stephens on the 2016 Belmont Stakes undercard. The 4-year-old More Than Ready colt won the Grade 3 Ack Ack at a mile last fall and was third by less than a length in his only start this year, the Grade 2 Churchill Downs Stakes May 6. The winner of that race came back to take the Grade 3 Aristides June 3.

Javier Castellano will ride Tom’s Ready from post 8 for trainer Dallas Stewart. Castellano won the first of his two Met Miles in 2005 with Ghostzapper, who he will join in the Hall of Fame this summer.

“He came off that long layoff and ran well at Churchill in the mud. He fought hard, ran a good race and the horse that beat him came back and won,” Stewart said. “The positives are he’s a very nice horse, he’s won over that Belmont track and he’s fresh. He worked good the other day so he’ll be fit and ready to go.”