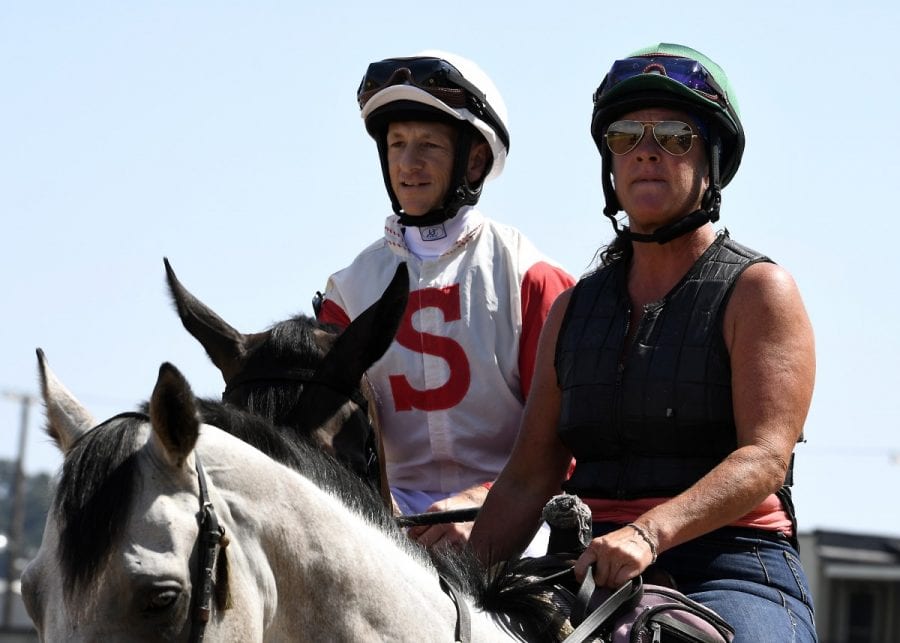 Nearly a year since his return following a decade-long absence from riding races, journeyman jockey Steve ‘Cowboy’ Hamilton has settled into familiar territory – in more ways than one.

Not only is the 43-year-old Hamilton back in Maryland, where he first made a name for himself and enjoyed the finest years of his career, but he has re-established himself as a leading rider in one of the most competitive jockey colonies in the country.

It has been a gradual but gratifying process for both Hamilton and his long time agent, Ben Feliciano Sr., whose partnership resulted in spring meet titles at historic Pimlico Race Course in 2004 and 2005.

Hamilton battled for leading rider into the final day of the Preakness Meet at Pimlico, which wrapped up May 29, finishing in a six-way tie for second with seven winners, one behind co-leaders Horacio Karamanos, Feargal Lynch and Kevin Gomez.

When Laurel Park opens its 33-day summer meeting on Friday, June 9, Hamilton once again figures to be among the main contenders.

“I’m glad to be back in Maryland. I’m an Oklahoma boy through and through, but Maryland’s always treated me well,” Hamilton said. “I have a lot of relationships with a lot of people around. It’s good to be back in the atmosphere and the camaraderie and doing what I love to do and had missed for 10 years.

“It took me a little while to break through but persistence pays off. We’ve been working real hard, Benny and I both, and we just keep trucking along,” he added. “You work hard and hard work pays off. I really believe that. I was raised that way and I tried to instill that in my own kids. Just show up and work hard every day and good things are going to happen.”

A winner of nearly 1,300 career races since his first in 1991, Hamilton is in his third incarnation as a jockey. He stepped away from racing for the first time following the 2000 season and spent three years working on oil fields in his native Oklahoma.

Hamilton returned to riding in 2004 and rode late into 2006 before an automobile accident – which left him with fractured vertebrae in his neck and several broken ribs – and a desire to raise sons Garrett and Weston caused him to call it quits again.

“I never was away from horses at all. I was shoeing horses for the last 10 years. To be back to riding, people don’t get a second or third chance and just by the grace of God and working hard and people giving me a shot it’s all come together,” Hamilton said.

“Everybody wants to be leading rider at some point but I’m happy with just doing good, doing the best I can and doing the best for the people I ride for and doing right by the horses I’m riding,” he added. “To be in the top five or 10, it’s an awesome feeling especially for being gone 10 years. That’s a long dad-gum time to be out of the game.”

Hamilton returned to competitive riding with 12 mounts during the State Fair Meet at Timonium last August and followed the circuit when it returned to Laurel Park for the calendar year-ending fall meet. He wound up with 10 wins from 219 mounts in 2016, going 0-for-56 before getting his first victory aboard Bo Vuk on Oct. 2.

So far in 2017 Hamilton has enjoyed 11 multi-win days including a riding triple on April 8. He ended Laurel’s year-opening winter-spring meet that concluded May 7 tied for fourth with 40 wins and fifth with more than $1 million in purse earnings.

“I was absolutely doing what I wanted to do. I’ve always said to my wife and everybody, not that I’m the greatest rider in the world. I don’t think I’m the greatest. I try hard and I learn something every day,” Hamilton said. “Every year I’ve ridden I can look back at the prior year and say, ‘Wow, I learned so much this year. I don’t know how I wasn’t falling off last year.’ You’ve got to keep an open mind that way. To me if you ever quit learning at something you’re doing, it’s time to do something else and get out.

“With that being said, it was a rough start. I thought, ‘I’m going to be back.’ I thought I was fitter than I was,” he added. “I had been running a lot [but] you’re never really race fit until you’re riding every day. People think, ‘I’ve been galloping 10 a day and I’m doing this and I’m doing that;’ it’s not the same as riding a race. To be out as long as I was, my timing wasn’t just right. I wasn’t seeing everything just right. It just took a little while … and it took a little while to get on some decent horses that actually had a shot to run well.”

Currently among Hamilton’s top mounts are Rodney Jenkins-trained filly Shimmering Aspen, who had her three-race win streak snapped in the Black-Eyed Susan (G2) May 19; multiple stakes winner Fellowship; 3-year-olds Honor the Fleet, fourth in the LARC Sir Barton May 20, and Cheyenne’s Colonel; and Grade 2-placed turf horse Top of Mind, also from the Jenkins barn.

“We have been lucky. People say they’d rather be lucky than good but sometimes you make your own luck, too. Again that’s where I think hard work absolutely pays off, being persistent,” Hamilton said. “I tell my boys all the time, both of them, the squeaky wheel gets the grease so don’t give up.”

Hamilton’s sons Garrett and Weston – both born in Maryland, where his wife is from and still has family – were 10 and 8 when he last left racing and will be 21 and 19 before the year is out. His youngest Weston plans to follow in his father’s footsteps and become a jockey, having done some prep work in Elloree, S.C. with Franklin Smith, brother of Laurel-based trainer Hamilton Smith, before returning to Maryland recently to have his appendix removed.

“I’m not one to pat myself on the back by any means but I think I do a good job and I try to learn every day, just watch everything that’s going on. You learn every day. I try to instill that in my youngest boy because he’s wanting to ride,” Hamilton said. “He’s been down in South Carolina galloping horses. He’ll be with me until September and he’s going to gallop for Mr. Ham Smith. Hopefully I’ll get to breeze a few horses with him out of the gate and from the pole and stuff like that. That’ll be a big highlight for me just to be beside my son doing what we both love to do.”