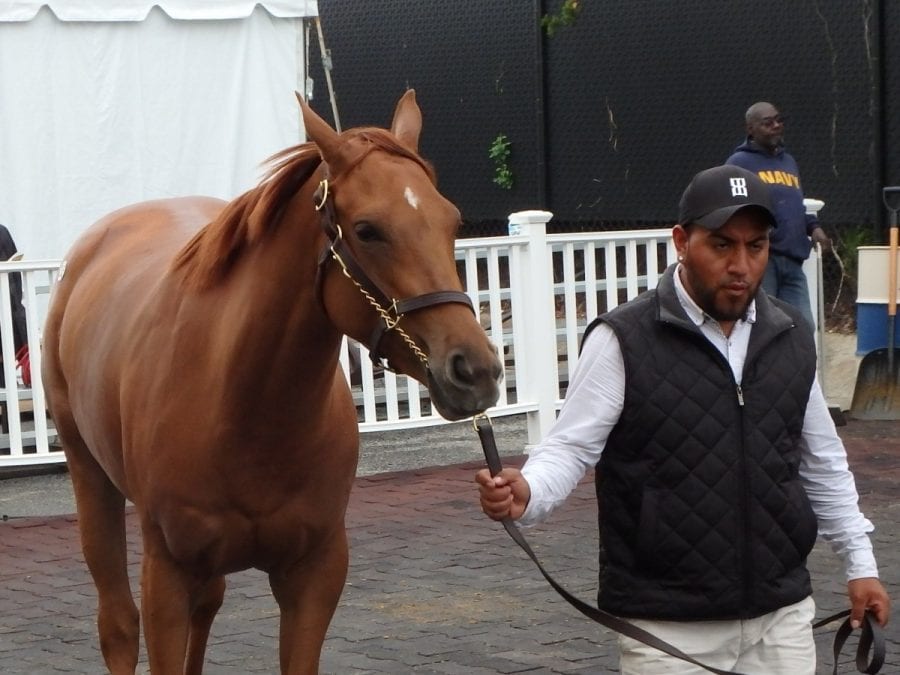 In the walking ring at the Fasig-Tipton 2-year-old sale. Photo by The Racing Biz.

by Ron Mitchell, The Blood-Horse

Emerging from the Fasig-Tipton Midlantic offices from where he had just been the winning bidder on a Curlin colt for a sale-record $1.5 million, trainer Mark Casse joked, “We’re trying to find the Preakness winner for next year.”

That humor referenced the gutsy runner-up effort by Casse-trained Classic Empire in the May 20 Preakness Stakes (G1) in which the colt was caught late by winner Cloud Computing.

Whether the colt Casse selected on behalf of his client John C. Oxley and Breeze Easy will be a classic contender next year remains to be seen, but he has all the potential of a horse who will compete at the highest level.

The sale of the Curlin colt and a deep buying bench led to solid across-the-board gains during the two-day auction at the Maryland State Fairgrounds in Timonium.

Fasig-Tipton president Boyd Browning Jr. said based on comments from consignors and buyers, the sale’s strong conclusion was not surprising.

“It’s great to set a record,” the executive said. “You’re always happy but I don’t think anybody was surprised. We had a legitimate group of top-quality horses and a legitimate group of horses at all price ranges and people left here happy with their purchases whether they were spending $20,000, $200,000, or $500,000. That is one of the strengths of this sale. The diverse group of horses that fit a variety of racing operations. When the consignors provide high-quality product, you are going to have successful sales.”

Browning said the strength of the broad market is encouraging for the upcoming yearling sales, the source of many of the juveniles offered at 2-year-old sales.

“This was probably one of the widest groups of buyers we have seen for awhile in the 2-year-old marketplace so that is encouraging,” he said. “Yearling-to-2-year-old pinhookers have had a pretty successful year, which means A) they are likely to have plenty of funds to re-invest and B) it might encourage other people to consider pinhooking as well.”

Casse was certainly happy with his major purchase.

“He’s just a beautiful horse and there aren’t many better sires than Curlin,” Casse said, noting that he was the underbidder on him when he was bought by consignors Randy Hartley and Dean De Renzo for $475,000 from St George Sales at last year’s Fasig-Tipton Kentucky July yearling sale. “He’s been on my radar a long time. I had actually watched him at the farm.”

Casse said the final price “was a lot, but was I shocked? No, I knew he wasn’t going to be cheap.”

The colt, bred in Florida by Miller Racing, is out of winning Stormin Fever mare Franscat, who has also produced two stakes winners, and is from the family of grade 1 winner and sire Ogygian. During the pre-sale workouts, the colt had breezed an eighth of a mile in the co-fastest time of :10.

Breeze Easy, operated by Michael Hall, has partnered with Oxley on at least one other horse. The entity is also a partner with Hartley/De Renzo on some of the consignors’ horses, but not the Midlantic record colt, according to Hartley.

“When a horse comes through of that caliber, that’s what they are worth, or maybe more,” De Renzo said. “He’s really a pretty amazing horse. But we’re happy and we’re happy for where he’s going to go and who is going to train him makes difference. As they get successful, it puts more feathers in our cap.”

De Renzo said the sale of the Curlin colt and a Smart Strike filly during the first session for $525,000 were affirmation of the partners’ move toward the top of the market in their purchases of yearlings and breeding stock.

“Our business plan we designed is coming exactly to right where we want it to be,” De Renzo said. “So this year’s yearling selection of horses will be as strong as this Curlin or the Smart Strike and we will have less horses with lesser pedigree.”

The sale’s second-highest price of $850,000 came from trainer Simon Callaghan for a Distorted Humor colt consigned by Eddie Woods, agent.

The colt is out of stakes-winning Lemon Drop Kid mare Lemon Kiss and is a half brother to grade 1 winner Lochte and from the female family of Horse of the Year and sire Black Tie Affair. Bred in Kentucky by Town & Country Farms, the colt had been purchased by Grupo 7C for $350,000 from Taylor Made Sales Agency at the Fasig-Tipton Saratoga yearling sale.

“He’s got a stallion’s pedigree,” said Callaghan, adding the colt was bought on behalf of a client that he declined to identify. “Great physical, really well-balanced colt. I thought he ticked all the boxes. There’s a lot of good horses come out of this sale, so let’s hope this is one of them.”

A chestnut son of Ghostzapper from the consignment of Cary Frommer was purchased by Susan and Charles Chu’s Baoma Corporation for $800,000.

Bred in Kentucky by Grace Thoroughbred Holdings, the colt was bought by Frommer for $200,000 from Summerfield at last year’s Fasig-Tipton Kentucky October yearling sale. The colt’s second dam is stakes winner More Than Pretty, a More Than Ready mare whose produce include grade 2 winner Kauai Katie and grade 3 winner Winding Way.

“We have waited for this horse,” said Donato Lanni, who signed on behalf of the new owners. “Obviously we like the Curlin colt and didn’t get him but this was one of our favorite horses in the sale. This horse did everything he was asked to do.”

“They got a great horse and we got a great price,” said Frommer, who with business partner Barry Berkelhammer upped their business plan last year to purchase better-quality yearlings for their pinhooking operation. “When I first saw him I just went nuts. I called Barry up, who was on the other side of the sale grounds and said ‘you’ve got to see this colt.’ I just loved him when I saw him. I always thought he was classy and the right horse.”

With two juveniles bringing $1.5 million, and a $1.1 million earlier in the year, Frommer said she will continue to buy more expensive yearlings. “I’m buying a more select yearling right now and am feeling pretty good about it,” she said.

This story provided courtesy of The Blood-Horse.