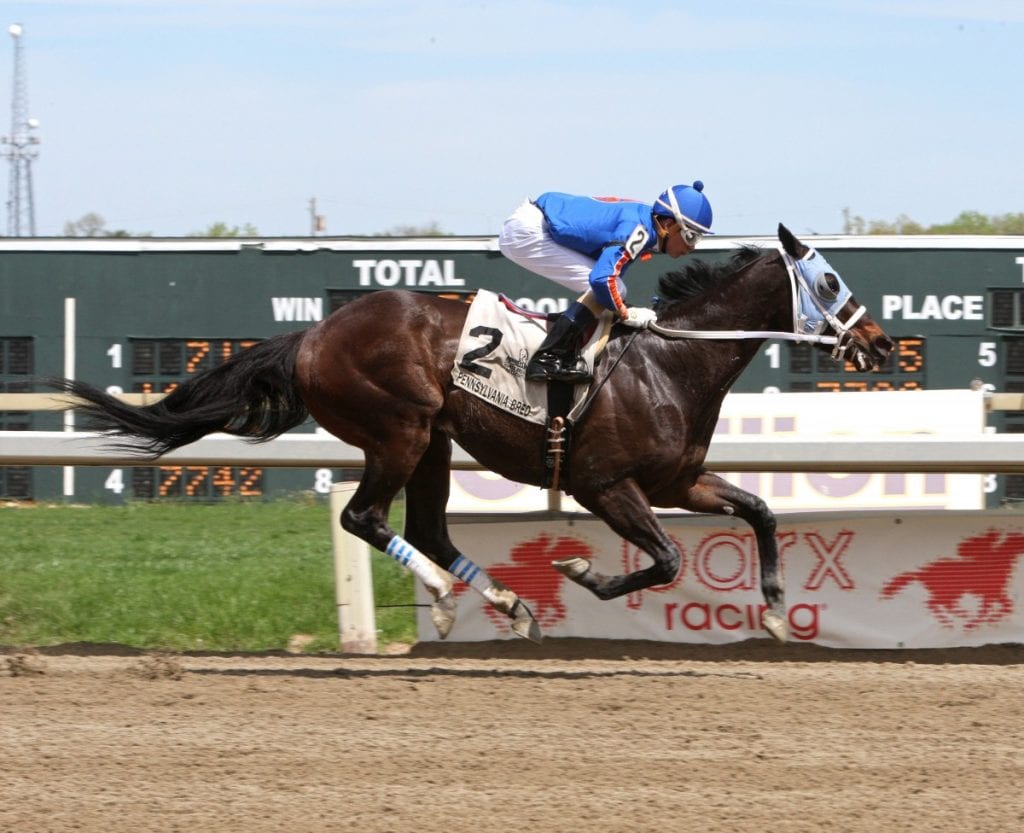 The Man cruised home to win at Parx on April 23. Photo by EquiPhoto.

He has a catchy name, a famous former trainer, and he’s one of the faster Pennsylvania-breds running at local racetracks.

Meet The Man, a 5-year-old son of former Pennsylvania stallion Ecclesiastic, who began his career in California for Hall of Fame conditioner Bob Baffert and has successfully made a return to the races on the East Coast while still co-owned by Baffert’s wife Natalie and his client, Bernard C. Schiappa.

Since making his comeback for new trainer John Servis after having last run in March, 2015 at Santa Anita, The Man has been perfect in three starts. He returned in a six furlong, $33,300 allowance against Pennsylvania-breds February 15 at Penn National, in which he took the lead right out of the gate, set moderate fractions under Jorge Vargas, Jr. while increasing his advantage, and then coasted under the wire four lengths in front “under a hand ride,” according to the Equibase chart.

About a month later, Servis found an allowance for him at Parx Racing against open company, a 5-½ furlong test that carried a purse of $62,540. Hammered down to 40 cents on the dollar by Parx punters, The Man briefly engaged Yeah Rocky for the lead around the turn and easily pulled away, opening up a length advantage in midstretch, again under Vargas, Jr. and winning by nearly three lengths.

Servis next selected a $42,250 Pennsylvania-bred allowance at 6-½ furlongs April 23 for the gelding, which he won in his usual flamboyant style, this time settling nicely for Vargas Jr. off the early leader before seizing control coming off the turn. He accelerated down the stretch as if someone had given him a hotfoot, sweeping under the wire nine lengths in front as the heavy favorite in a swift 1:15.77, increasing his earnings for the year to $84,660.

“Baffert called me about a year and a half ago about taking him,” recalled Servis. “He said he’d breezed him (at Santa Anita) and he chipped a knee. Being a Pennsylvania-bred, Baffert said he wanted the horse to make some money. He put him on a van and sent him out here – when he arrived, the van driver told me, ‘You have a horse here that’s from California.’ And I said, ‘I do?’ I didn’t even know he was on his way.

“He had a good bottom already, I guess I worked him five or six times and then I wanted to make it as easy for him as possible for his comeback,” continued Servis. “I tried entering him against Pennsylvania-breds at Parx, but the races weren’t going, so I ended up sending him to Penn National. I’m trying to find the best spots possible for him, so that he’ll last a lot longer.”

Servis said that he expects to keep The Man in allowance company for the moment.

The Man was bred by Glenn Brok, who owns Diamond B Farm in Mohrsville, Pa. with his wife, Becky. He’s out of Shorty’s Epiphany, an unraced daughter of Northern Afleet who was also bred by Brok. She is a half-sister to multiple stakes winner Rodeo Licious; her dam, Shorty’s Promise, was one of the first mares bought by the Broks when they started their farm.

“I always thought (The Man) was a nice colt from the time he was a foal,” said Brok. “He had good balance, a good eye, a great head and shoulder, and he was very correct. I offered him as a yearling at our annual open house for $5,000, but nobody had the money. Then we took him to the (Fasig-Tipton) Timonium sale, and I couldn’t get him sold there, either.”

Brok said a friend of his, agent Rod McVey, told him that he needed a few colts to fill an order for a client, and asked if he had any. Brok told him about The Man, and ended up partnering with him. McVey sent him to Ocala to be broken, and Brok said a few months went by, with McVey reporting that he was doing well.

The team decided to take him to Fasig-Tipton’s 2-year-old in training sale at Timonium, where he posted an impressive breeze.

“The day he worked at the sale the wind was blowing something fierce and the track was slow, but he went down there in 10 and change,” said Brok. “Afterwards, I had people coming over, slapping me on the back and congratulating me.”

When the hammer dropped, the colt that Brok couldn’t sell for $5,000 brought a $115,000 bid from Baffert, with New York-based trainer Gary Contessa as the underbidder.

The Man began his career at Santa Anita in January, 2015 as a 3-year-old, placing twice from three starts in maiden special weight company. He broke his maiden March 22 in a 5-½ furlong special weight race, in which he won by nearly five lengths in a peppy 1:03.66. That race, however, was his last for Baffert.