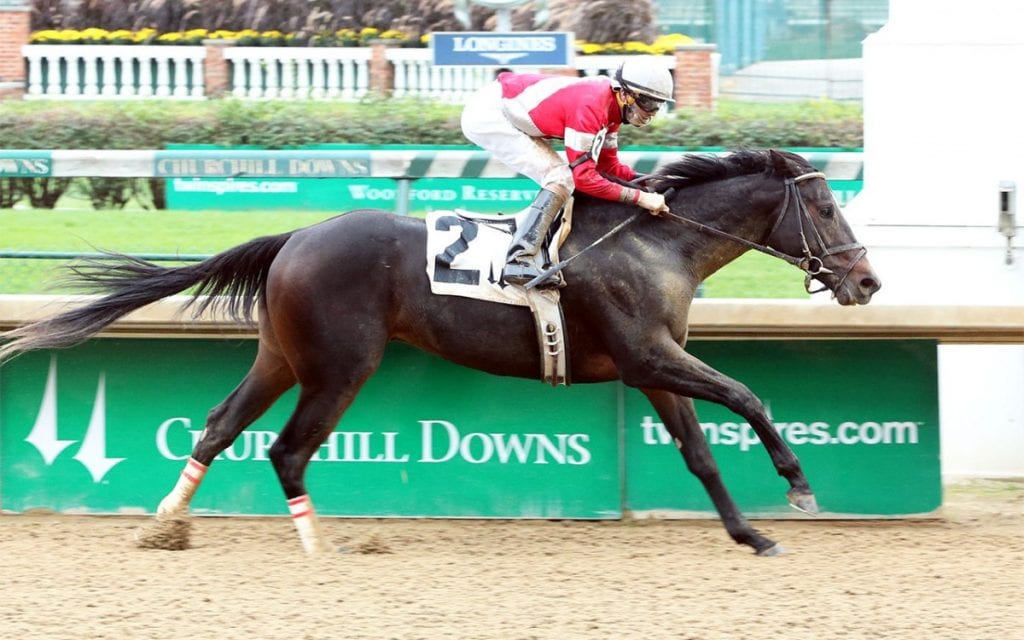 This week I made my annual Derby Week pilgrimage to Louisville. Not to sample some of the finest bourbon in America. Not to tour the Louisville Slugger factory, not even to take in live racing under the famous twin spires at Churchill Downs.

A man on a mission, my primary objective was to observe the Oaks and Derby runners in the morning… very early morning. Nothing can compare to seeing these magnificent thoroughbreds take to the track for a daily gallop. It is during these times I look for subtle signs of peak fitness (or lack thereof).

The secondary objective is the human element, which can be difficult to interpret at times. That’s because trainers all use the same phrases, “… couldn’t be doing any better…” and “I’m pleased with how he/she worked…”

Even when their horse appears to be on death’s doorstep, they say, “I wouldn’t trade my horse for any other.”

Still, if you hunt around, you’ll hear some tidbits of interest.

Norm Casse, assistant trainer of Classic Empire and State of Honor, when asked to compare the two: “The one scary thing about Derby Week is the post positions… we got a perfect post for Classic Empire, I like being drawn outside. State of Honor is that horse who doesn’t get respect and he should… he ran a great race in the Florida Derby… he got stopped at the quarter pole a little, but we think he’s doing real well and we expect him to make a lot of noise in the Derby.”

His answer, in one word: “Training.”

With Irish War Cry at Fair Hill and McCraken thriving at Churchill Downs, Battaglia deemed it likely that there would be more buzz around the latter.

Carl Nafzger, trainer of two Derby winners, Street Sense and Unbridled, draws a comparison of those two to McCraken, trainer by Ian Wilkes: “Ian and I have been together since 1989… he was Unbridled’s exercise rider, so he’s been through this Derby experience a couple times.”

When asked about McCraken’s only loss, a third-place effort in the Blue Grass, Nafzager recalls, “If I remember correctly, Street Sense ran second and Unbridled ran third in it… every race counts on its own merit and McCraken’s doing what he needs to do… we need our lanes (paths), if we get our lanes he’ll run a good race.”

Steve Asmussen, trainer of Hence, Untrapped and Lookin At Lee, saw Lookin at Lee, third in the Arkansas Derby, draw the dreaded #1 Post. But, he said, that’s all right.

“(Jockey Corey) Lanerie is going to the rail anyway,” he said. “My hesitation or feeling is I’m 0-for-15 in the Derby. I’m in the one hole, it hasn’t lit the board in twenty years! Maybe it took both of them coming to together to cure that? If any horse can overcome the #1 hole, it’s Lookin At Lee… with his experience and demeanor. You need a little luck all of the time. You need a lot of luck this time because it’s the Kentucky Derby.”

Gormley may have won the Grade 1 Santa Anita Derby to prep for this, but the knock on him is he’s still too slow. But, trainer John Shirreffs said, folks can think what they want.

“The 18 Post is OK, but I thought that’s a little too far out there, but Victor (Espinoza) immediately texted and said, “No! I like that, it’s a lucky number!”

He continued, “We hope he’s fast enough to win Saturday. In the Santa Anita Derby we changed tactics. We took him back, so he could finish and that worked a lot better. I think we’ll use the same tactics in the Kentucky Derby.”

Nicole Russo, KY-based Correspondent for the Daily Racing Form, whose job includes reviewing horse flesh at auctions and on the track, has seen all twenty and shares who has stood out to her: “State of Honor is the one who every time he went by I had to turn my head and say, “Wow!”… it looks like he’s thriving right now… an enthusiastic and confident horse who is enjoying his work right now. He looks like a horse who’s going to run the race of his life. Whether or not that’s good enough to win the Kentucky Derby or not is another question entirely, but he’s the one who has gotten my Gold Star in training.”

Ron Ellis, southern California based trainer who does not have a Derby horse, offered his opinion on the field: “Looks like a very wide open Derby. We lost the best horse (Mastery) we had in California to a fractured leg, but the other ones kind of fit in but there are certainly no standouts. We usually send a pretty good horse from California, but they (Battle of Midway, Gormley and Irap) wouldn’t be my choices this year. I thought McCraken looked watching him train this week and I know he likes this race track so he would probably have to be my pick.”

And then there’s Dr. Kendall Hansen, owner of longshot Fast and Accurate who was taking modestly surprising wagering action early. Sure, he’s a longshot, Hansen acknowledged. But the team has a plan.