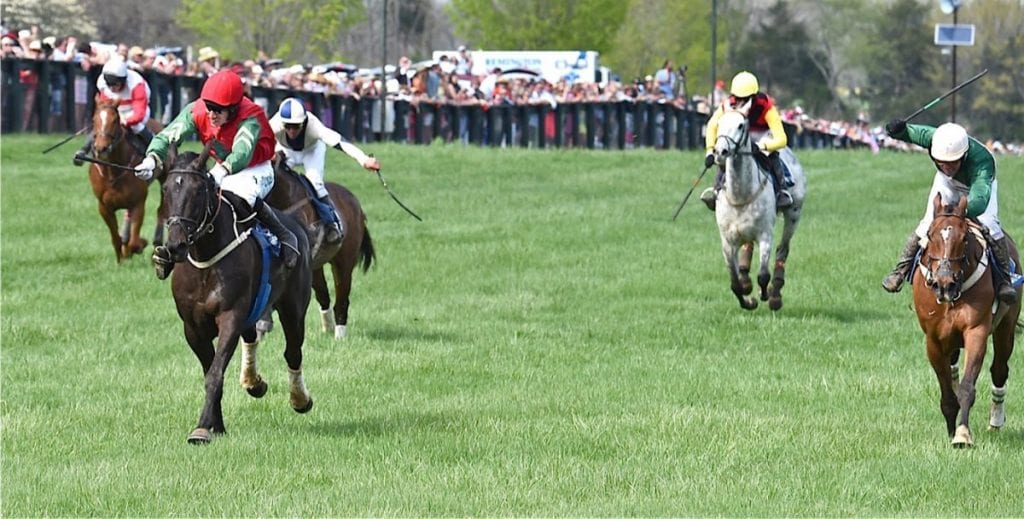 Racing at the Virginia Gold Cup.

It may be difficult to envision, yet the largest assemblage — outside of Churchill Downs — that watches the Kentucky Derby likely lies in a field just north of Warrenton, Virginia in a place named The Plains. This Saturday, after watching live races over brush, timber, water or just grass, the Virginia Gold Cup crowd will take to the portable giant monitors, or maybe their cell phones, to watch the greatest two minutes in sport.

For the third year, the Virginia Equine Alliance has added three flat races following the featured 95th edition of $100,000 Virginia Gold Cup. With the closure of Colonial Downs after the 2013 racing season, Virginia horse groups have sought to provide opportunities for Virginia thoroughbreds and horsemen to race out-of-state at Laurel Park in Maryland and in-state at rural venues such as the Gold Cup’s Great Meadow. The races include the $50,000 Secretariat Stakes, going a mile and a half on the turf, and a pair of allowance races.

The Secretariat field is headed by Renown (3-1), who won two of these “country” races in 2015 before finishing 6th in last year’s Secretariat Stakes. Trainer Elizabeth Voss then decided to switch him back to the traditional racing plant in the $50,000 Cape Henlopen Stakes at Delaware Park last summer. It worked; n0w-six-year-old Champs Elysees gelding won by a nose. After a 3rd at Saratoga in the $100,000 John’s Call, Merriebelle Stable’s charge won two more stakes, the $100,000 Laurel Turf Cup and the $100,000 Sycamore Stakes (G3) at Keeneland.

My Afleet, who switches back to jumps on Saturday at Great Meadow, was 2nd in the John’s Call. Also in that 1 & 5/8 mile Saratoga stake was Rum Tum Tugger (6-1), who won this race last year and is back looking to repeat. Voss also has Mr. Singh in the Secretariat, making his American debut after nine starts in England.

Susan Cooney’s Rodie, who broke his maiden at Great Meadow last spring, returns in race seven, a $40,000 allowance race going 1 1/2 miles. In the time since that win, Rodie (15-1) has found the board at Charles Town three times.

Complete St. (3-1) was cross-entered in the Secretariat Stakes but found Saturday’s Virginia-restricted finale, a 1 1/4 mile allowance, more favorable. Coupled with their Atlanta Babe, the 6-1 third choice in the seventh race, Complete St., a multiple stakes winner of more than $250,000, gives trainer Lilith Boucher and jockey Richard Boucher a decent chance of sweeping the late double.

In the featured 5th race, the $100,000 Virginia Gold Cup, there is Lemony Bay who won a race at Great Meadow on last Spring’s card at 3 miles. He now faces an extra mile and Ebanour (8-5), the 2016 winner, as well as Grand Manan (4-1), who won the fall Great Meadow feature, the International Gold Cup. These three have only had slight interruptions of multi-race win streaks over the last year, yet can only slightly separate themselves from Raven’s Choice, Canyon Road and Le Chevalier, all with significant wins in the last year. Anyone of the seven-horse field wouldn’t be a surprise in the winner’s circle. Even longshot Hot Rize (15-1) won this feature in 2014.

Charminster began his 2016 season in the $75,000 David Semmes Memorial (G2) last spring and won it. He’ll defend that title in his 2017 debut in the race just prior to the Gold Cup and will come against a field of eight foes that he largely outfinished last year despite winning only this one race. The field includes Simenon, a 10-year-old with more than $900,000 in earnings in Great Britain — but who debuted his 10-year old season with his first start in North America, three weeks ago.

My Afleet (2-1), favored in the third race, a $45,000 allowance, makes just his second start over jumps after a successful career in the flat that included a stakes win and nearly $300,000 in earnings. His first start ‘chasing suggested this might be his forte after all, as he won his debut, against maidens, by some 34 lengths at Tryon, NC. Great Meadow gets to be his encore attempt.

In the second race, the $40,000 Steeplethon, making his 52nd start, is twelve-year-old Saluda Sam, a strong favorite (6-5). Seven horses will carry 160 lbs or more over a three-mile course over timber and a romp through water, as shown recently on a feature aired on CBS’s 60 Minutes. One of its starters, Cognashene was one of the last horses ever to race at Colonial Downs, having run there both on the last day of live flat racing — July 13, 2013 — and again the following year when the track hosted a handful of jumps races.

The opener features a field of ten maidens largely comprised of horses that started their careers on various mid-Atlantic flat tracks reaching to Churchill Downs and Saratoga. Eight starters in this group had significant experiences on both the dirt and turf. A year ago this Saturday, favored Mutin (3-1) finished 4th in a claiming race on Kentucky Derby day at Churchill Downs.

Outside of NASCAR, the Virginia Gold Cup is the largest sporting event in the Old Dominion in one of the Commonwealth’s most traditional racing venues. Now with wagering and video from Churchill Downs on Kentucky Derby day, interest continues to grow.