Fast and Accurate: “We’re going to the lead!” 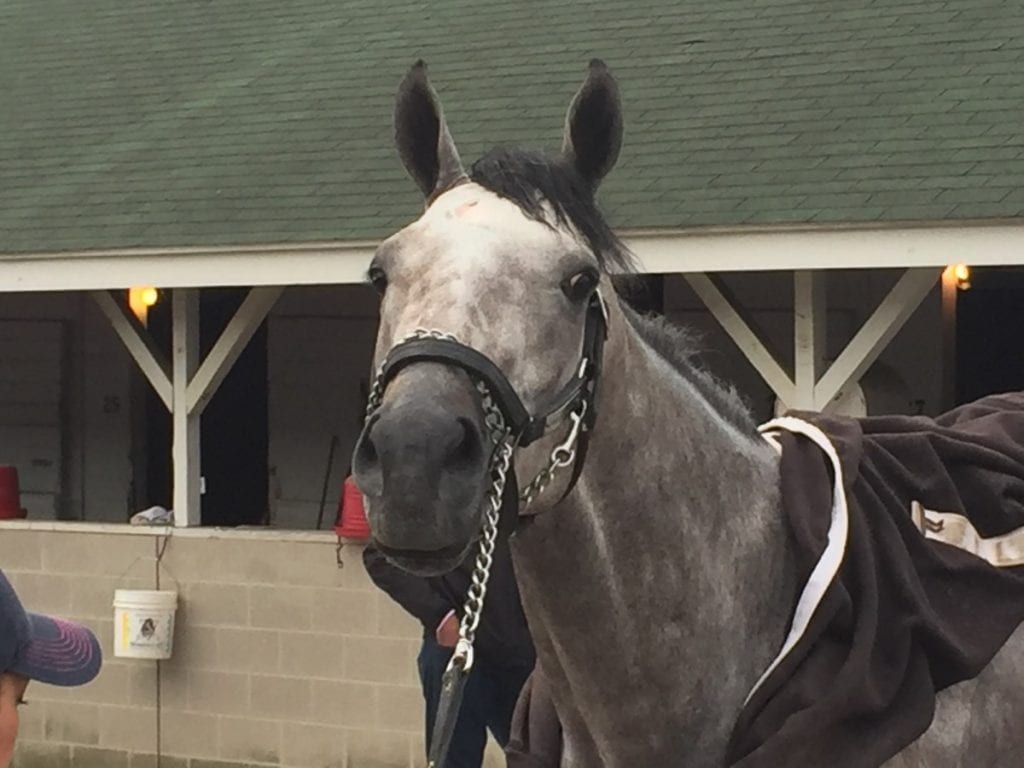 Here’s looking at you, Fast and Accurate. Photo by Gary Quill.

What would you do with $200,000? If you are Dr. Kendall Hansen, you use it to pay the supplemental nomination fee to the Triple Crown series of races for your PA-bred, Fast and Accurate.

Breeder John R. Penn did not pay the fee when the three-year-old gray son of Hansen was foaled in 2014 — and neither did the good doctor after he purchased the colt at the Ocala Breeders Sales April 2016 two-year-old event for $85,000.

“I nominated the 40 (Hansen) horses I bred and paid $600 (for each). I should get a little credit for that,” said Dr. Hansen. “About a week before the Spiral, Mike [Maker his trainer] told me he thought we had a chance to win… but at the time it really never clicked.”

Fast and Accurate won the G3 Spiral Stakes on March 25th. The deadline for late nominations to the Triple Crown was March 20th, at a cost of $6,000. Not acting on the confidence of his trainer cost Hansen $194,000.

That’s a steep price for a chance at Kentucky Derby glory. Especially so when most experts consider Fast and Accurate a longshot to win, which is reflected in his 50-1 morning line odds.

And how does his trainer feel about their chances on the first Saturday of May? “The horse is doing well. He’s on a three-race win streak and it looks like he continues to hold his form,” said Maker.

In six career races, Fast and Accurate has won three, his three most recent outings. The huge hurdle is that none was on dirt, the surface on which the Kentucky Derby is run at Churchill Downs.

“The Derby is a tough race to win anyway.” Maker pointed out. “First dirt race to win makes it a little tougher, I guess.”

Pennsylvania-breds Lil E. Tee (1992) and Smarty Jones (2004) are the only two from the Keystone State to wear the blanket of roses on the first Saturday of May. To become the third, Fast and Accurate will need to run the race of his lifetime.

How does Dr. Hansen envision that happening?

“We’re going to the lead!” Hansen said with conviction. “If anyone wants to go out with us… who wants to run with a 50-1 shot? That’s crazy Dr. Hansen’s horse, leave him alone.”

In the aftermath of the Spiral victory, Hansen sold a portion of Fast and Accurate to Skychai Racing and, later, another share to former Olympic skier Bode Miller. Hansen retains the majority share.

Hansen first came to national racing prominence back in 2011 when he campaigned his namesake horse — and Fast and Accurate’s sire — to an Eclipse as champion two-year-old and then the next year to a spot in the Kentucky Derby starting gate. That rise was not without controversy — or a feeling that Dr. Hansen was, well, a little bit crazy.

Hmmm. With the lack of pace in this race, and if Fast and Accurate goes gate-to-wire, then who could be called crazy? Certainly, not Dr. Kendall Hansen.