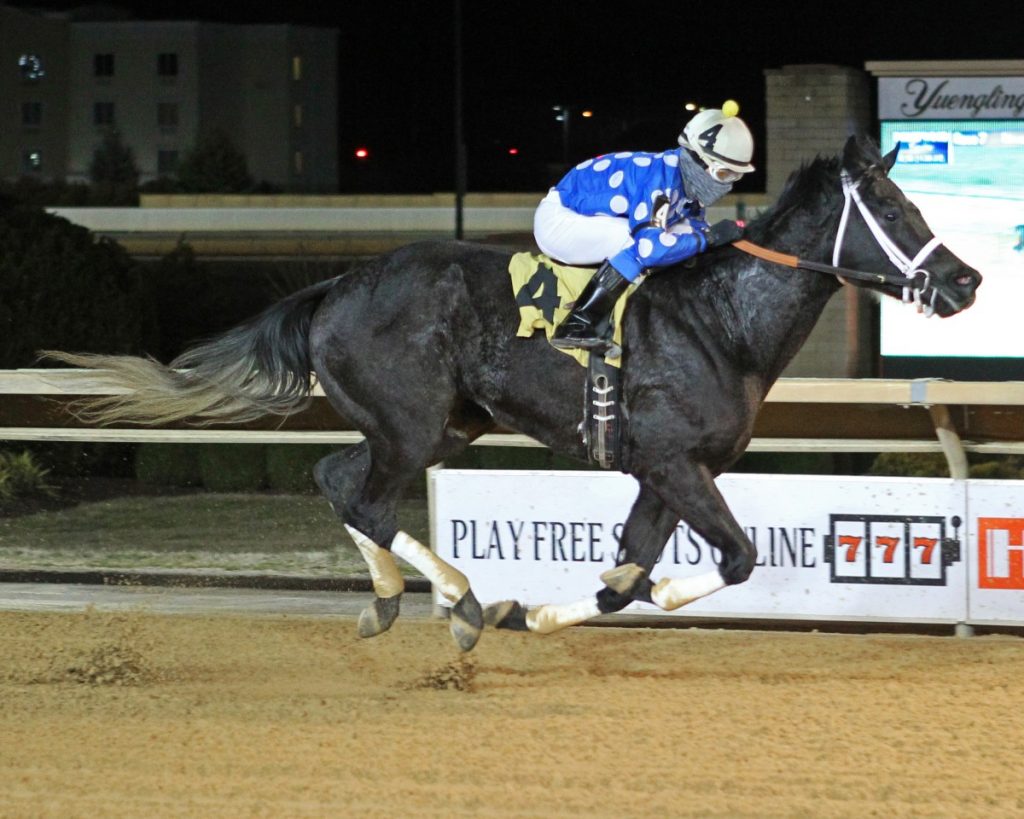 Three fillies that clashed in an allowance contest in mid-February are back in the entries in West Virginia-bred stakes on the undercard of Saturday’s Grade 2, $1.25 million Charles Town Classic.

But only two of them will contest the $50,000 It’s Binn Too Long Stakes for sophomore fillies. The third, Cuttin Edge Tech, will try her luck against males in the $50,000 Coin Collector. Both races are carded at 4 1/2 furlongs.

In mid-February, Moonlit Song won a one-turn allowance dash for state-bred sophomore fillies by seven lengths for owner-trainer Tim Grams and in her wake that night were Cuttin Edge Tech, trained by Crystal Pickett, and Lies And Scandals, a John McKee-trained homebred daughter of Fiber Sonde.

Six weeks later the three talented fillies all appeared on the same card at Charles Town, this time in different races. All three displayed their ability by winning allowance events. Both Cuttin Edge Tech and Lies And Scandals prevailed in one-turn dashes, while Moonlit Song won in her first try going two turns.

Once again Saturday, the three state-bred fillies will compete on the same card.

In the It’s Binn Too Long Stakes, a one-turn dash, Moonlit Song (8-5) and Lies and Scandals (3-1) top the morning line. Tim Grams is hoping for a result similar to that February allowance, when Moonlit Song dusted her rivals. But her next two attempts to compete in a one-turn dash were nixed – first by a shortage of entrants in a race that did not fill and then by a weather postponement. That’s why her most recent start came around two turns of the Charles Town oval.

“She came out of that race in great shape,” Grams said of Moonlit Song’s victory in her two-turn allowance debut. “I always have some concerns cutting a horse back in distance. I really don’t like to do it. I didn’t want to stretch her out to two turns, but there was nothing else for her. She raced really well and she came out of the race well.”

Moonlit Song, a sophomore daughter of Fiber Sonde out of the Parker’s Storm Cat mare Malibu Kitten, finished fourth in her career debut last fall then came right back to graduate in a one-turn maiden special weight event last December. The It’s Binn Too Long will mark her stakes debut, and while Moonlit Song has impressed to date, no one’s taking this one for granted.

Lies And Scandals solidified the depth of the local division and validated the Feb. 15 allowance when she romped clear as the odds-on favorite to stop the timer in 52.51 in the one-turn dash March 29. Another daughter of Fiber Sonde owned, bred and trained by John McKee, Lies And Scandals notched her first win in three tries this year and posted her second victory in six career outings in her tune-up for the It’s Binn Too Long.

“She raced really well that night and she came out of it in good shape,” McKee said of Lies And Scandals, who also will saddle Aye Fancey (8-1) for the one-turn stake. “She’s got speed, and she’s got a good finishing kick.”

The It’s Binn Too Long field also includes Ollie Figgins trainee Unaquoi (7-2). The daughter of Gattopardo won the Rachel’s Turn Stakes over the strip last fall and placed in two other stakes.

Trainer Crystal Pickett had good reason for passing on the It’s Binn Too Long for this test with Cuttin Edge Tech.

“Right now the fillies look tougher than the boys,” she explained.

In the first of the three consecutive March 29 allowance events for state-bred fillies, Cuttin Edge Tech darted to command soon after the gate opened and held sway late for a three-length score in 52.72. She’s yet another daughter of Fiber Sonde,  trained by Pickett for owner-breeder Karl Johnson, Sr.

Cuttin Edge Tech defeated male rivals in her career debut on Jan. 18, was second to Moonlit Song in the February test, and then recorded her second win in three tries last month.

“She’s really, really quick,” Pickett said of the filly whose barn nickname is Emma. “She trained really well for her debut, but there weren’t a lot of three-year-old fillies at the time, so I ran her against the boys that first start. She’s still learning.”

Cuttin Edge Tech is 5-1 on the morning line and will have to contend with, among others, the undefeated Jeff Runco trainee Aaron’s Tap (7-5) and 2016 Henry Mercer Memorial Stakes winner Unrideabull, for Michael Sterling.

Back in February, all three fillies raced against each other. Last month, each ran in separate races. Saturday, the three will split into two different races.

“That’s definitely a good group of three-year-old fillies right now,” McKee said. “They’re all daughters of Fiber Sonde, which helps me. It’s a good group. Usually you get one standout in that division, but any of those three fillies can win [on any given night].”