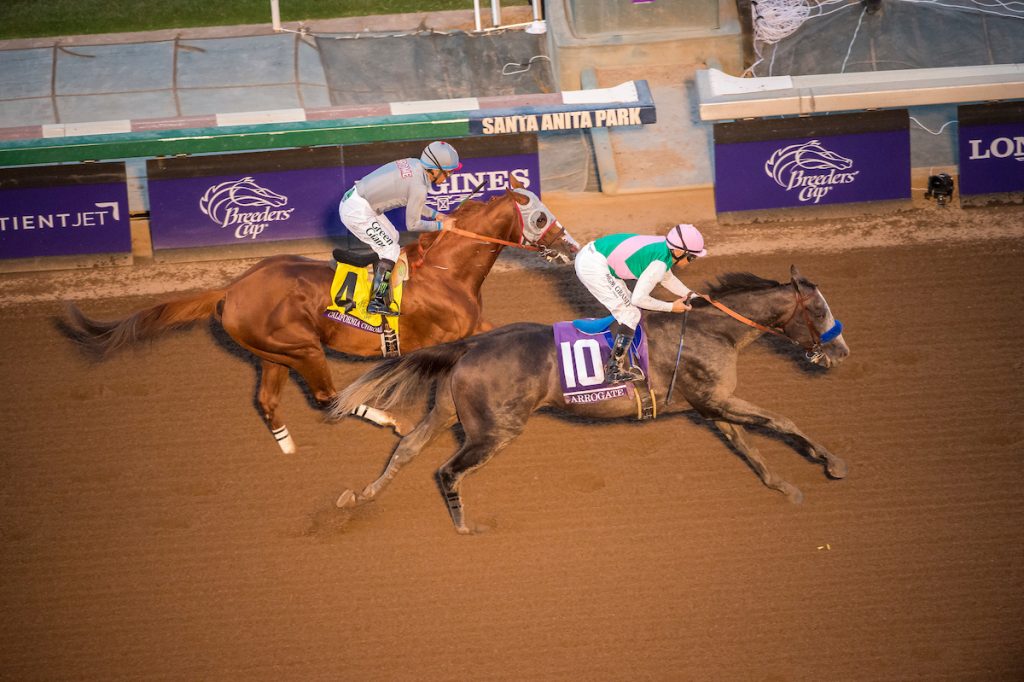 The final Kentucky Derby prep races took place this past weekend, and the results led to some changes in week 12 of the National Thoroughbred Racing Association (NTRA) Top 3-Year-Old Poll, released today.

John and Debby Oxley’s reigning two-year-old champion Classic Empire (13 first-place votes, 359 points) ranked seventh last week slides into first after winning the Arkansas Derby (GI) at Oaklawn Park this past Saturday. The Pioneerof the Nile colt, trained by Mark Casse, is ranked second with 132 qualifying points on the Kentucky Derby Leaderboard for a starting berth in the Kentucky Derby at Churchill Downs on May 6.

Irish War Cry (6 first-place votes, 301 points) also slides down a notch, from second to third. The G2 Wood Memorial Curlin colt is owned and breed by Isabelle de Tomaso and trained by Graham Motion. The sophomore is ranked fifth with 110 qualifying Derby points.

Ranked sixth is Peacock Racing Stable is Gunnevera (1 first-place vote, 188 points). Trained by Antonio Sano, the Dialed In colt is ranked eighth with 84 qualifying points on the Kentucky Derby Leaderboard.

Gormley (1 first-place vote; 134 points ) the Grade I Santa Anita Derby slips from sixth to seventh on the NTRA top-ten ladder. Ridden by Victor Espinoza, trained by John Shirreffs and owned by Jerry and Ann Moss, the Malibu Moon colt is ranked third with a total of 125 Derby qualifying points.

The NTRA Top 3-Year-Old Poll is the sport’s most comprehensive survey of experts ranking the generation of Thoroughbreds that includes all Triple Crown contenders. Every week eligible journalists and broadcasters cast votes for their top 10 horses, with points awarded on a 10-9-8-7-6-5-4-3-2-1 basis. The Top 3-Year-Old Poll concludes June 12 after the Belmont Stakes.

For the third week in a row the first five top ranked horses remain as status quo on this week’s NTRA Top Thoroughbred Poll for horses four and up.

The number one ranked horse, Group 1 $10 million Dubai World Cup winner and Eclipse Award champion Arrogate (41 first place votes; 410 points) with earnings of $17,084,600 is to take some time and freshen up as he prepares for his next engagement, the G1 $1 million TVG Pacific Classic on August 19 at Del Mar Race Course according to his trainer Bob Baffert and owner Juddmonte Farm.

Standing in second in the top-ten is the second place finisher from the Dubai World Cup, Gun Runner (357) for trainer Steve Asmussen and Winchell Thoroughbreds and Three Chimneys Farm.

Group 1 Dubai Golden Shaheen winner the New York bred, Mind Your Biscuits (135) moves up a step in sixth for the 32-year-old trainer Chad Summers with Eclipse Award Turf Champion Tepin (133) dropping down a notch to seventh for trainer Mark Casse.

Ranked eighth after making her first start since finishing fourth in the Breeders’ Cup for the first time is the Grade I Apple Bloom Handicap winner Stellar Wind (105) for owners Hronis Racing LLC and trainer John Sadler. The now 5-year-old Curlin mare, voted champion 3-year-old filly of 2015, improved her career record to eight wins from 14 starts.

The NTRA Top Thoroughbred Poll concludes November 6 after the running of the Breeders’ Cup.