Many factors contribute to drop in equine fatalities at Delaware Park 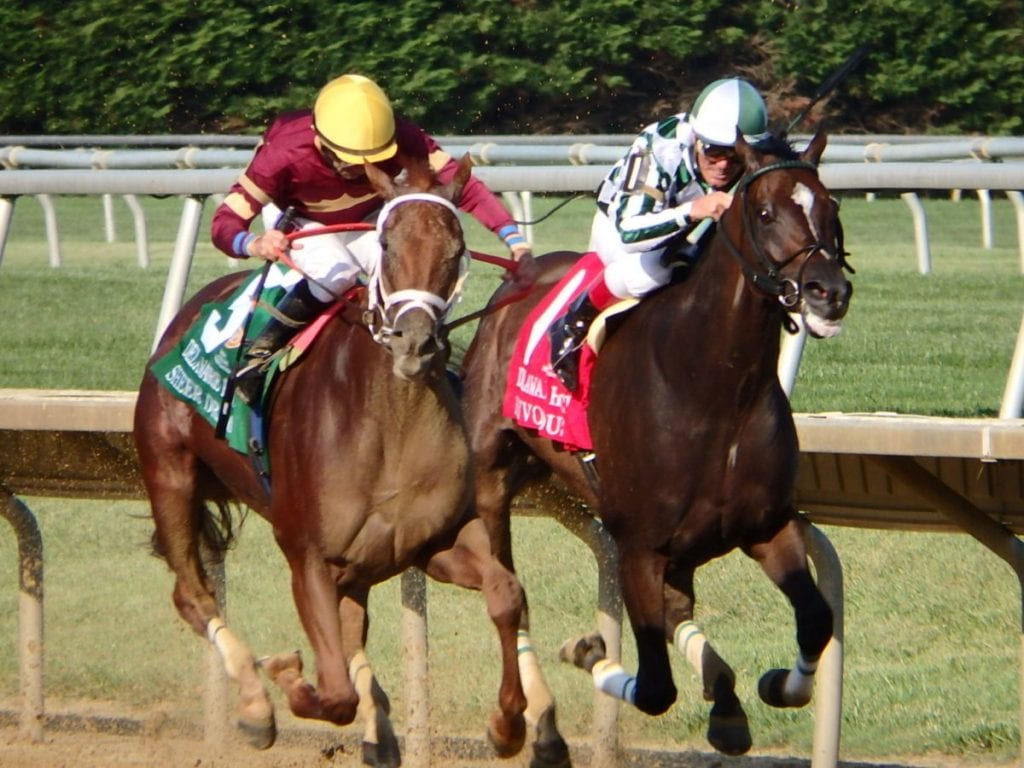 Sheer Drama (outside) outfought Frivolous to win the 2015 Delaware Handicap. Photo by The Racing Biz.

Delaware Park experienced a dramatic drop in its fatality rate last year despite having its most starts since 2012, according to The Jockey Club’s Equine Injury Database (EID) for 2016, released in early March.

Delaware’s lowest-ever fatality rate was achieved thanks to several different factors, according to executive director of racing John Mooney. Mooney cited a change in the medication culture under the National Uniform Medication Program and careful maintenance of the Stanton track’s racing surfaces as key.

“Trainers are being a lot more cautious about therapeutic medication,” Mooney said, “and we’ve always done our best to maintain the track surfaces. We also perform three exams on the horses every racing day – in the morning, in the paddock, and at the starting gate – and the veterinarians are doing a terrific job. All of this has helped.”

“It was a team effort,” agreed John Wayne, executive director of the Delaware Thoroughbred Racing Commission. “The racing surface improved. We have the backing of the Rickman family, who are very interested in protecting the image of the track. And a major contributing factor was the claiming rule. It sent a message: Don’t put your horse in if it’s not 100 percent.”

Under Delaware’s claiming rule, in the event a horse dies during a race or is euthanized on the track during a race, any claim on that horse will be voided. A claim can also be voided if the horse tests positive for any prohibited substance.

Wayne said that the addition of a Safety Steward last year was also instrumental in the improved safety statistics. Delaware hired Reese “Rug” Howard, a former steeplechase steward and jockey and trainer, after a nationwide search for the right person. He is also certified through the Racing Officials Accreditation Program, and is tasked with checking the barns, horses and tack rooms.

“We’re selective about who we let stable at Delaware Park,” said Wayne. “If there’s someone who’s blemished the industry, I don’t let them come here. We have to work on parallel paths with the horsemen for the same goal. The health and welfare of the horse is paramount.”

According to the 2016 Annual Report issued by the Delaware Racing Commission, Delaware was one of the first jurisdictions to adopt the Multiple Medication Violation Penalty System for participants that continue to violate medication rules. Wayne noted that enhanced penalties hopefully accomplish the mission of eliminating those that can’t race their horses honestly.

Delaware also has an active out-of-competition testing program, in which randomly selected horses are subject to having blood samples drawn and tested for blood doping agents. Wayne said that 11.6 percent of horses that competed at Delaware Park last year were subject to out of competition testing, a percentage he said was far above other racing jurisdictions in the United States, and that all horses tested during 2016 were found to be free of blood-doping agents. The Commission performed 201 out-of-competition tests in 2016.

Testing protocols will be changing during 2017 to include other substances that are considered to be banned from horses that are actively racing or training. According to the Annual Report, nine positive tests were recorded.

The Delaware Racing Commission posts Stewards’ Daily Reports, Veterinarian Scratch Reports and all Administrative Rulings on disciplinary actions on its web site, in keeping with its mission of public transparency. Delaware Park is only one of three tracks in the mid-Atlantic region to make its fatality statistics on the EID public, along with Pimlico and Laurel Park. Other tracks in the region participate in the EID, but don’t allow the public to view them, for fear of misinterpretation.

Bessie Gruwell, executive director of the Delaware Thoroughbred Horsemen’s Association, said that Delaware Park has been at the forefront of safety for more than two decades.

“There isn’t just one thing you can pinpoint that has led to the low fatality rate,” said Gruwell. “I do think the addition of the Safety Steward was a great idea, and the horsemen have really embraced him. He’s been especially helpful from an information standpoint. He’s definitely been good for us.”