“Long journeys” merge for Grant, de Tomaso and their horses 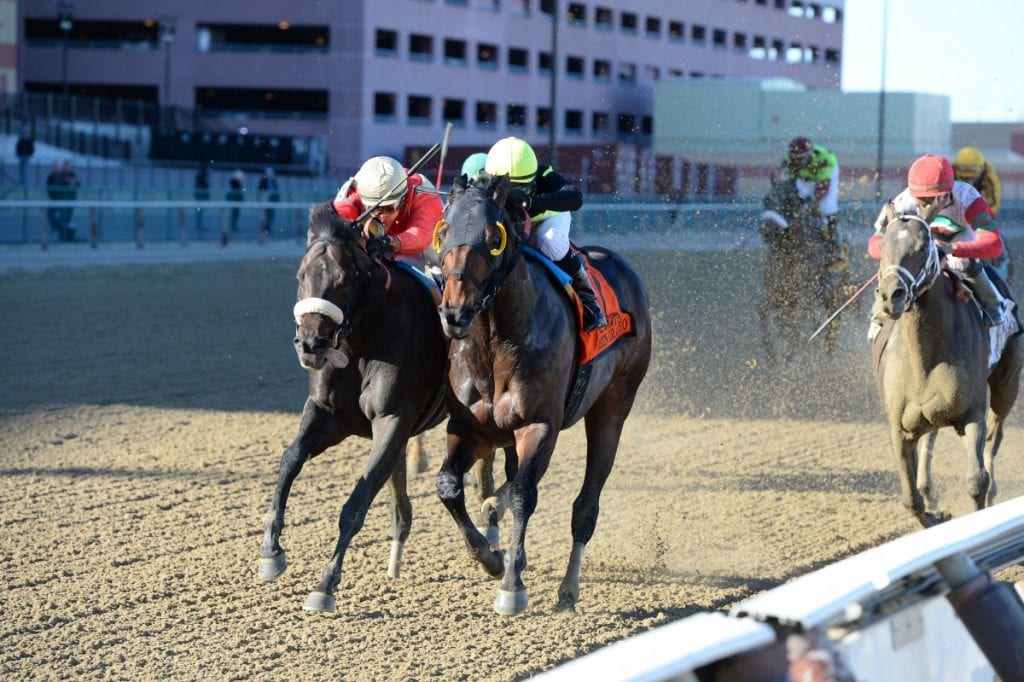 Green Gratto (inside) held off Unified to win the G1 Carter Handicap on Saturday. Photo by Joe Labozzetta/NYRA.

At first glance, Isabelle de Tomaso and Gaston Grant would appear to have little in common. De Tomaso, a scion of the family responsible for the creation of Monmouth Park, splits her time between Europe and Palm Beach. Grant, the son of Jamaican immigrants, lives in East Flatbush, Brooklyn.

De Tomaso grew up riding horses on her family’s New Jersey estate. Grant grew up going to Aqueduct to gamble with his father.

De Tomaso has owned and bred racehorses for decades. Grant started his first horse as an owner in 2012.

But on Saturday, April 8 at Aqueduct Racetrack, their stories merged in consecutive graded stakes races, milestones for both of them, stories that began on breeding farms in New Jersey, an increasing rarity in Thoroughbred racing.

In 2004, Grant, who drives a truck for United Parcel Service, decided to head to the backstretch, becoming a hotwalker for trainer Peter Chin. That proved to be a profitable association.

Years later, according to the 53-year-old Grant, Chin passed a New Jersey-bred horse he’d been given by breeder Peter Kazamias on to Grant. Green Gratto made his first start for Grant, his brother Anthony, and a third partner, who’s since left the partnership, on March 9, 2013.

It wasn’t until 10 months later that Green Gratto broke his maiden, and he raced primarily at Aqueduct for the next two years, sojourning occasionally to Belmont and Monmouth Parks, often picking up a check but seldom making it to the winner’s circle. In 2015, Grant took out his training license, and on August 3, Grant made his training debut—at Saratoga, no less—and Green Gratto finished second by a neck. Less than four months later, he was a graded stakes winner, taking the Grade 3 Fall Highweight at Aqueduct, beating the multiple graded stakes winner Palace by a head.

On Saturday, Grant spotted his horse ambitiously—as he is wont to do—in the Grade 1 Carter Handicap. The seven-year-old horse went off as the longest shot on the board at 54-1, and under jockey Chris DeCarlo went right to the lead and never looked back, holding off a late charge by multiple graded stakes winner Unified to win by a neck and give his owner/trainer his first Grade 1 win.

“It’s been a long journey with this horse, and it’s emotional.”

With the win, Green Gratto has earned $1.1 million for his owner, but Grant has no plans to give up his day job, not yet. He trains eight horses, four for himself, four for clients, but, he said, “Driving the truck pays the bills.”

Like Grant, De Tomaso has an affinity for driving—but for her, it was fancy race cars in her youth, not a delivery truck. But like the trainer, she departed from a conventional path, heading to Europe to drive race cars and start a business, DeTomaso Automobili, with her husband Alejandro.

But with horse racing in her blood—her father was Amory Haskell, the first president and chairman of the Monmouth Park Jockey Club—De Tomaso turned back to horses, and true to her roots, remains committed to the shrinking New Jersey breeding program.

“She and her sister Hope Jones have gone back every year to Overbook Farm in Freehold,” said Ellie Glaccum, representing her great-aunt in the winner’s circle after Irish War Cry won the Grade 2 Wood Memorial, earning himself a spot in the Kentucky Derby.

By Curlin out of Irish Sovereign, the chestnut colt is a fourth-generation homebred that began his career with two wins at Laurel Park before shipping south to run at Gulfstream Park for trainer Graham Motion. Off a dismal performance in the Grade 2 Fountain of Youth following a gate-to-wire win in the Grade 2 Holy Bull, Irish War Cry rebounded beautifully in the Wood, running just off the pace and drawing off to win by 3 1/2 lengths as the third betting choice at 7-2.

“This is the most exciting thing to happen to us in a while,” said Glaccum.

Irish War Cry is De Tomaso’s first graded stakes winner in the U.S.—though she has amassed a number of stakes wins in Italy—and the Wood win launched him to #4 on the Kentucky Derby leaderboard. Trainer Graham Motion said that the horse will train up to the Derby at his Fair Hill base.

Motion won the 2011 Kentucky Derby with Animal Kingdom, and he is no stranger to the pressure of running horses at the sport’s highest level. But watching the Wood from Keeneland was, he told the New York Racing Association, especially tense.

“I don’t remember having a situation like this, when I felt so much was on the line,” he said. “It’s also gratifying to win this race for Mrs. de Tomaso.”

And while a Kentucky Derby win would also be gratifying, to put it mildly, Motion might feel less pressure on the first Saturday in May than he does on the last Sunday in July. The Jersey-bred de Tomaso wants her Jersey-bred horse to win the Haskell Invitational, the race named for her father.

“The Haskell is all Aunt Isabelle cares about,” said Glaccum.

And that is where de Tomaso and Grant part ways. Green Gratto has run at Monmouth five times. He finished eighth twice, fourth once, and second twice.

“That horse don’t like Jersey,” said Grant with a laugh. “I brought him there in an allowance race. He was 3-5 and finished down the track.”