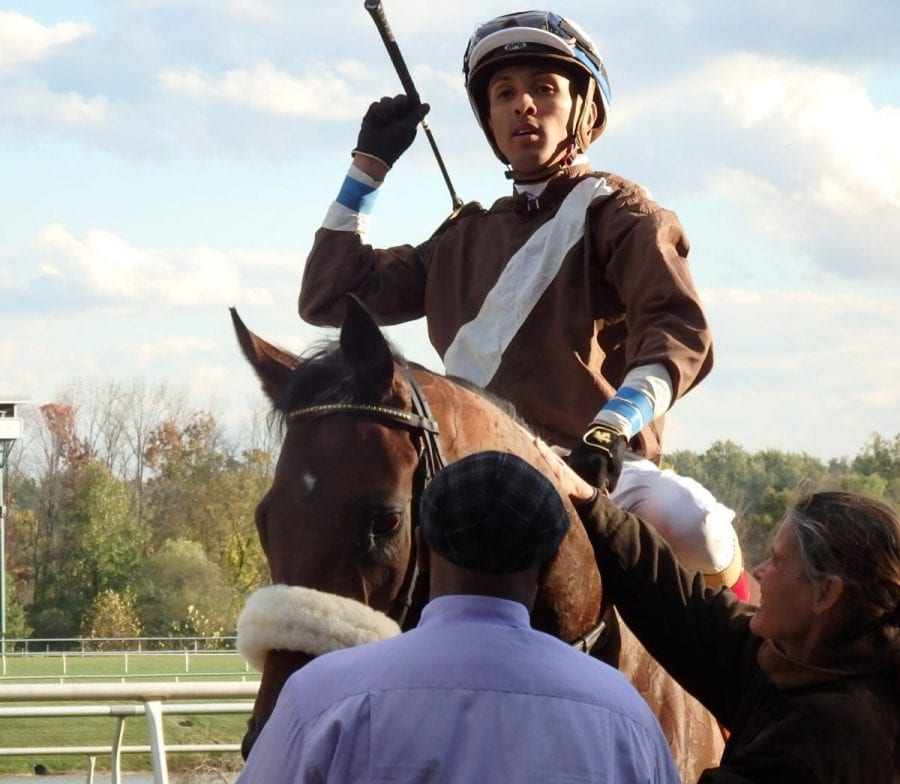 Jockey Victor Carrasco will be out two to three months after fracturing his scapula in a spill at Laurel Park Sunday afternoon.

Another jockey, Guillermo Rodriguez, suffered a broken hand in the same incident.

Going to be out of action for 8-12 weeks . Got fracture on my left shoulder blade . Thanks God for protect me & GRodz , it could be worse.

Carrasco was aboard Stalk, the even-money favorite in the eighth race on the card, a $16,000 maiden claiming sprint taken off the turf to the main track. Stalk had taken a clear lead leaving the quarter pole and looked to be moving to an easy victory when he suddenly broke down, throwing Carrasco to the ground.

Rodriguez was aboard Unclenedwhodrank, who fell over his stricken rival.

Carrasco’s agent, Tom Stift, said that Carrasco was in good spirits despite the injury and was mainly concerned with Rodriguez’s well-being.

He said that Carrasco would be in a sling for at least the next three weeks, when he would return to the doctor.

He added that it “should be 8 weeks to be back” for Carrasco.

Unclenedwhodrank, a 50-1 longshot in the race, rose and completed the course without a rider. Stift said that trainer Alcina Rawles told him that the horse seemed none the worse for wear.

Stalk, however, had to be euthanized, trainer Phil Schoenthal confirmed this morning, after dislocating his ankle.

“It’s been a long, long time since I had a horse go down on the racetrack,” Schoenthal said. “It feels terrible.”

For the Proudnfree, a 36-1 longshot, was able to avoid the accident and went on to win the race by 2 1/2 lengths.

Carrasco, a journeyman jock, is fourth among Laurel Park jockeys with over $864,000 at the current meet. He earned the Eclipse Award as top apprentice jockey of 2013.

His younger brother Carlos recently joined the colony and has recorded nine wins to date.