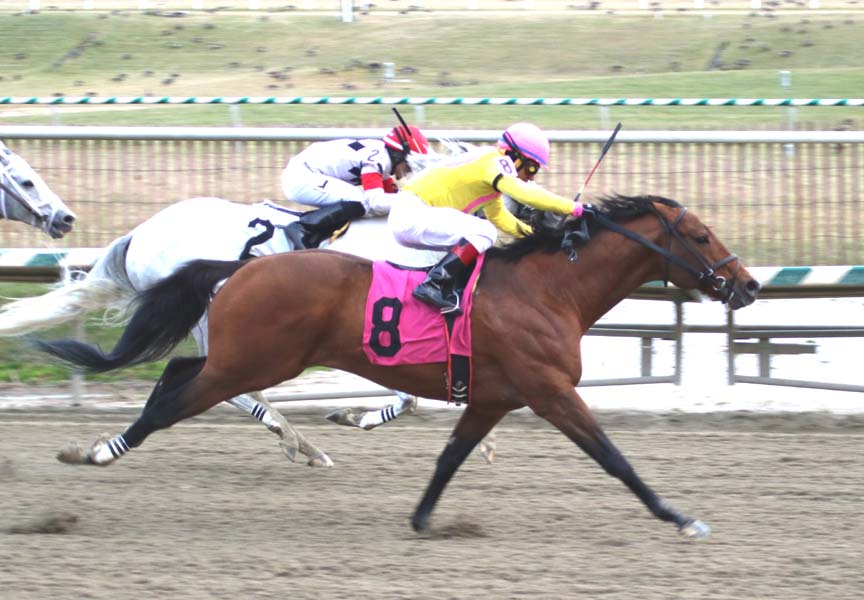 The 41st running of the General George for 4-year-olds and up is among six stakes worth $850,000 in purses on the 10-race Winter Carnival program and one of two graded events, along with the 65th running of the $300,000 Barbara Fritchie (G2) for females 4 and up. Both races are run at seven furlongs.

One of two horses entered by New York-based trainer Rudy Rodriguez, along with 4-year-old colt Voluntario, whom he also owns, Heaven’s Runway stretches out off his 32-1 upset of the Fall Highweight (G3) Nov. 24 at Aqueduct and a half-length victory over Chief Lion in the Dave’s Friend Dec. 31 at Laurel, both races coming at six furlongs.

Since being claimed for $62,500 out of a runner-up finish in a 5 ½-furlong turf sprint last summer at Saratoga, Heaven’s Runway has run three times for his new connections. He had been winless in 12 previous starts dating back to the Hockessin Stakes in July 2015 at Delaware Park prior to his recent streak.

“With some horses, sometimes when you win one race it kind of builds their confidence a little bit and I think that’s what happened with him,” Rodriguez said. “I know they were giving us a lot of weight in the Fall Highweight and the last time he ran a pretty good race at Laurel. He was a little bit closer than he usually is and he finished up pretty good, and it looked like he was drawing away. We’re just very lucky to have him right now. We’ll keep our fingers crossed. He’s had some issues but we’re just trying to keep him happy and keep him going.”

Heaven’s Runway had run on grass in four of five starts for three different trainers before joining his new barn, running fourth in a seven-furlong optional claiming allowance on the Belmont grass first time out for Rodriguez.

“I always liked him for the dirt, even though I ran him on the turf. He ran a pretty good race and didn’t embarrass himself, but we had dirt in mind for the winter, for sure,” he said. “Thank God it worked out. I liked the horse for the dirt and we got lucky. Sometimes it’s better to be lucky than good.”

Voluntario will be making his third start in a graded stakes and fourth in Maryland, having run fourth in the 2015 James F. Lewis III at Laurel. Last year he was second to American Freedom in the Sir Barton and was a 5 ¾-length winner of a second-level optional claiming allowance at historic Pimlico Race Course, both at 1 1/16 miles.

The General George will be the first sprint for Voluntario since winning a six-furlong starter optional claimer over Aqueduct’s inner track last February.

“I don’t think he wants to go two turns. I think he’s more of a mile horse, so we’re going to try to cut him back and regroup with him,” Rodriguez said. “Hopefully the seven-eighths will suit him perfect. We just have to put him where he can win. He ran a very, very good race [the last time he sprinted]. We like him. He looks like he’s a nice kind of horse, so hopefully we can get to the bottom of him.”

Another pair of contenders coming in from New York are Grade 3 winner Ocean Knight and Grade 3-placed Classy Class for trainer Kiaran McLaughlin. Both horses were among a promising group of colts for McLaughlin on the Triple Crown trail in early 2015, and each will be making their Laurel debut in the General George.

Stonestreet Stables’ Ocean Knight won the 2015 Sam F. Davis (G3) at Tampa Bay Downs but got some time off after running seventh in the Tampa Bay Derby (G2) in his next start. He owns two wins in eight tries since, including a front-running neck triumph in his most recent effort, a one-mile optional claiming allowance Jan. 5 at Aqueduct.

“He’s doing very well and we just like this distance for him,” McLaughlin said. “It’s a graded stake and he’s very well-bred. We’re hoping we can have a good year with him. He’s by Curlin, and Curlin has been doing so well.”

Cheyenne Stables’ Classy Class was third in the Gotham (G3) and fifth in the Blue Grass (G1) in 2015 before being taken off the Triple Crown trail. He was cut back to sprint distances in six of his last seven starts, interrupted by a 13-month absence between races from September 2015 to October 2016. Most recently he was sixth, beaten 1 ½ lengths, in the Jan. 16 Toboggan (G3).

“He broke and he dropped way back because another horse came out and he clipped heels with him about five jumps out of the gate. He just took himself right out of the race,” McLaughlin said. “We were worried he was so far back, and then he came flying. It’s not too often when you run sixth beaten a length and a quarter on the dirt. On the turf, sometimes. We think it’ll set up well. The distance is perfect for him, seven-eighths. We’re excited to run him.”

M M G Stables’ Laurel-based multiple stakes winner Never Gone South is entered to make his third start off a six-month layoff and second of 2017, closing to be second to General George contender Afleet Willy in a third-level optional claiming allowance Jan. 16. He has finished worse than third twice in seven career tries over his home track, winning the Frank Whiteley Jr. to open his 2016 campaign.

“He needed his first race a little bit and in his second race he was definitely a little tighter and ran a decent number,” trainer Cal Lynch said. “This was our plan when we gave him the time off last year. He’s definitely going to face a tough field, one of the toughest he’s faced. There’s four or five shipping in that are definitely contenders that he’ll have to deal with but he’s doing so well we figure he deserves a shot at something like this right now, and we’ll see where we go from there.”

Adam Staple and Jalin Stable’s Grade 3 winner Page McKenney, the defending champion in the General George, was cross-entered in the John Campbell by Pimlico-based trainer Mary Eppler. The claimer-turned-millionaire ended a nine-month gap between races with a popular and decisive 1 ¾-length victory in the Native Dancer Jan. 21 at Laurel.

“I was very impressed with his last race. I was really just looking for him to show some semblance of his old self and was definitely not expecting a win off such a long layoff,” Staple said, “but he looked just like the old Page McKenney. I was genuinely surprised. It was just so amazing to have been able to have the privilege to see him run again.”

Stallwalkin’ Dude, co-owned and trained by David Jacobson, has been no worse than third in seven starts dating back to last summer including stakes wins in the Bold Ruler (G3), Tale of the Cat and Gravesend. He was second by a neck to Heaven’s Runway in the Fall Highweight and third by the same margin in the Toboggan in his most recent outing. He owns 17 wins and more than $1.2 million in purse earnings from 49 lifetime starts.

Rounding out the field are BB Horses’ Afleet Willy, a winner of three straight and four of his last five races, set to make his stakes debut; Raymond Mamone’s Imperial Hint, on a two-race streak including the six-furlong Fire Plug at Laurel Jan. 14; and multiple stakes-placed Grasshoppin, seeking his first black-type victory.