Sweet On Smokey fires in What a Summer 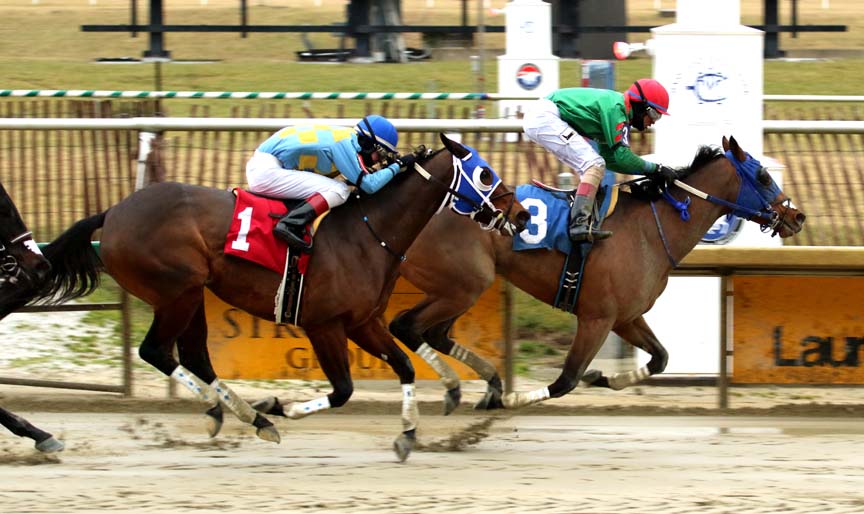 Sweet On Smokey won the What a Summer Stakes. Photo by Laurie Asseo.

Slop-loving Sweet On Smokey found the Laurel Park going to her liking Saturday in the $75,000 What a Summer Stakes, and the result was a half-length victory.

Sweet On Smokey, a $12,500 claim by trainer Claudio Gonzalez in July 2015, now has won this event twice in a row and has four added-money victories overall.  The win pushed her career earnings to $425,137, with 10 wins overall from 35 career starts.

Disco Chick, the 8-5 favorite, popped the latches on top in this six furlong event over a good, sealed track, and maintained a two-length advantage through a quarter-mile in 23.26 seconds and a half in 46.78.

Sweet On Smokey, between rivals rounding the turn, entered the lane in third place.  Peeking over his left shoulder, jockey Victor Carrasco spied an inside opening and guided Sweet on Smokey to the rail, where she took aim at the leader.

Meanwhile, on the outside, Lovable Lady, compromised when she hopped at the start, loomed as they straightened for home.

But it was Sweet On Smokey who kept chewing up ground, finally taking over inside the sixteenth pole and going on to win by a half-length in 1:11.89.  Disco Chick held second, while Lovable Lady was another length back in third.

Camille Claudel and Southern Girl, an $820,000 purchase at Fasig-Tipton November, rounded out the order of finish.

With the win, she became the second runner from December’s Willa on the Move Stakes to win next out, and she turned the tables on Lovable Lady, who won that day.